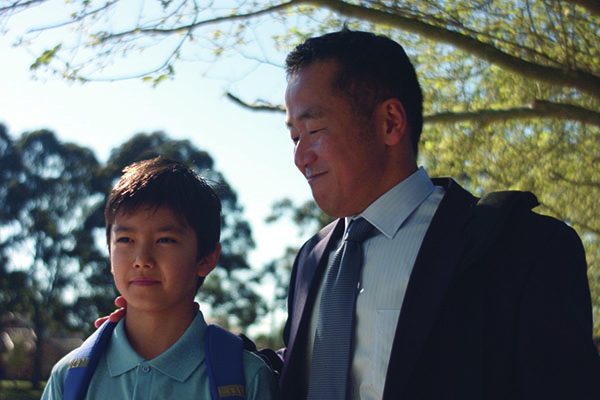 Tatsumi, left, who plays Josh, and Shingo Usami, who plays Kenji, have to reconcile their differences to keep their family together in ‘Riceballs’. Photo courtesy: TIFF

Riceballs is the directorial debut of Sydney-based actor Shingo Usami. Usami has appeared in a number of Australian television shows and his first film recently appeared at the TIFF Kids International Film Festival.

The short film shows the struggles of both characters in the wake of a family member’s death. His son misses his mother and his father is facing pressure from Japan to return home.

Through this struggle they come to terms with their identities as Japanese Australians through inventing new and tasy onigiri designs.

We spoke with Shingo Usami about making the film, his acting career in Australia, and the themes of identity on display in Riceballs.

Nikkei Voice: Riceballs speaks on an issue of identity that many half-asian people feel around the world, but it also speaks on the father’s dilemma as well. The desire to return home after his wife’s death, his desire to have his son connect with his Japanese side. What was the process like developing these aspects of character you played and wrote?

Shingo Usami: I suppose this came from my personal sentiment about taking pride in my Japanese heritage while living overseas. I don’t have a child myself, but if I did I guess I’d do my very best to pass down the cultural knowledge and sensitivity to my kids. I have lived outside of Japan for more than half of my life, and as my identity and the sense of belonging keeps evolving, I’ve come to realize my ‘Japanese-ness’ has always been one of the most significant components of who I am. It’s not about nationalism and doesn’t mean refusing to adapt to the new culture. To live in between two cultures, you are constantly reminded of the importance of treasuring your heritage and its uniqueness. That’s a natural way of living for any immigrant, I guess.

NV: How did the idea come about to build the son’s relationship with Japanese culture and his father through onigiri?

SU: In Australia I have conducted a series of Japanese language and culture workshops for primary and high school students and one of the topics was bento. We introduced not only the language but also many cultural and educational aspects through bento making. As you may know, Japanese parents, mostly mothers, make elaborate bentos for the kids, and I wondered how it would go if it was a father who was bad at cooking. All he could make would probably be rice balls, and he would refuse to compromise with making sandwiches for fear that it’d remind the son of his mother. Also I thought the action of making rice balls would be so beautiful representing the love of a typical Japanese father squeezed into them.

NV: What are your thoughts on Vegemite or Ozumite as it is called in the film? Do you dislike it as much as your character?

SU: I don’t like vegemite at all! That’s something of which I’ve never acquired the taste after 20 years of living in Australia.

NV: As someone who is Japanese and lives in a place outside of Japan, what struggles have you faced that helped inform developing this short film?

SU: One of the biggest reasons why I made this film was that I wanted to create a meaningful character for me to play. The opportunities for non-Caucasian actors to work are quite limited in Australia, and we are lagging behind the US and Canada in terms of the multi-ethnic casting. I’m sick and tired of portraying stereotypical, superficial characters like mean Japanese soldiers (which I get all the time throughout my 15 year acting career) Australia is a multicultural society, like Canada, and I thought it was important to create a story that represents the reality of families with the Japanese background.

NV: Could you tell me a little more about Josh’s actor? I’m assuming he’s half-asian, but what questions of identity did he bring up while in production? At that age, I was full of questions about what it meant to be half one race and half another.

SU: The boy is the son of my Japanese friend, and yes, his father is English. We didn’t talk much about his sense of identity as I didn’t want him to over think his tasks. I simply asked him to imagine how he’d feel if he was in a situation like that, and just behave as he would normally. It was his first acting experience in front of the camera, but he was outstandingly calm and professional for which I’m really grateful. 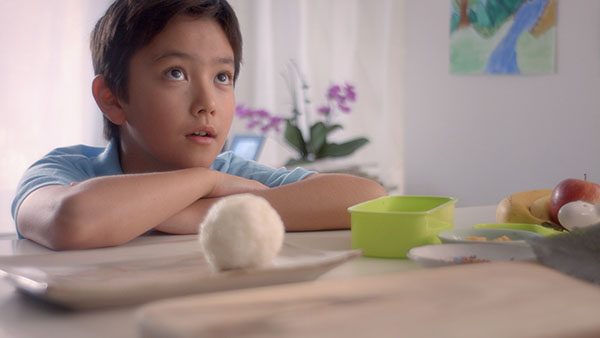 Josh doesn’t start out liking onigiri, but his father’s inventiveness and artistry eventually helps him reconcile with his Japanese side.

NV: I believe this film was your directorial debut, what was it like being on the other side of the camera?

SU: It was very challenging and every step I took was a wonderful learning opportunity. We had spent a lot of time preparing for the film, so it went rather smoothly, but I still found it very difficult to be on both sides of the camera. I wasn’t able to watch the takes after my scenes due to the lack of time and resources. I had to leave it to my DOP and assistant director, counting on their judgment. I really appreciate their professionalism.

NV: Also a big congratulation on having your film selected for the TIFF Kids Film Festival, what was your reaction to the news?

SU: Oh, it was so fantastic to hear from them with good news. It was the first film festival that selected this film, so it has done an amazing job at boosting my confidence!

NV: What do you hope Canadians will learn from Riceballs?

SU: I believe this story will speak to everybody who lives in a multicultural society like Canada, and I hope it’ll help remind people that treasuring who we are helps us move forward despite any hardship.

NV: What projects are you working on in the future?

SU: At the moment I’m focusing on promoting this film through the film festival circle and look forward to what unfolds from there. I’ve got some ideas of short films, so I will start working on the scripts soon.

NV: Having played a father in this film, did your experience with the character perhaps change how you might act in the same situation with children?

SU: It might, if I have one, but it seems unlikely! 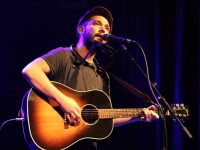 Garrett Kato bares his soul through his music
October 18, 2019