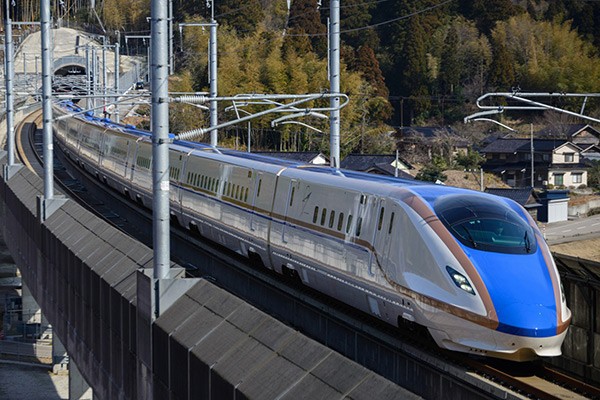 A bullet train running on the Hokuriku Shinkansen line, the latest to open in Japan. Photo courtesy: WMC

On April 21st, Japan set a new world train speed record with a Shinkansen reaching a top speed of 603 km/h on a test track, which beat the previous record set in 2003 by 13 kilometres.

Going from Tokyo to Nagoya on the Nozomi, which is currently the fastest train service out of major cities in Japan, takes about 90 minutes. A typical Shinkansen runs at a maximum speed of about 320 km/h due to safety regulations; however, if the tracks could be reinforced travel times could be halved.

According to NHK News, Japan Railways Group (JR) is planning to put the new maglev train into everyday use between Tokyo and Nagoya by 2027.

By 2045, the train is planned to start running through Tokyo to Osaka, which will take about 54 minutes.

While Japan’s bullet trains may be fast in tests, around the world maglevs are getting faster and faster in commercial use.

The next fastest is the Shanghai Transrapid from China that travels at 430 km/h followed by commonwealth of Australia at 357km/h, which is about the same speed at the Peregrine Falcon the fastest bird in the world.

When compared to the competition, Japan’s maglevs typically run a little slower than others.

Now here in Toronto, the maximum speed of TTC subway is 88 km/h and a GO Train can reach 150 km/h.

According to website High-Speed Rail Lines Canada, if a similar high-speed transit system was built in Canada it could go from Toronto to Montreal in about two hours.

The following is a series of videos of the fastest trains around the world, click the links to see what these maglevs look like in action: