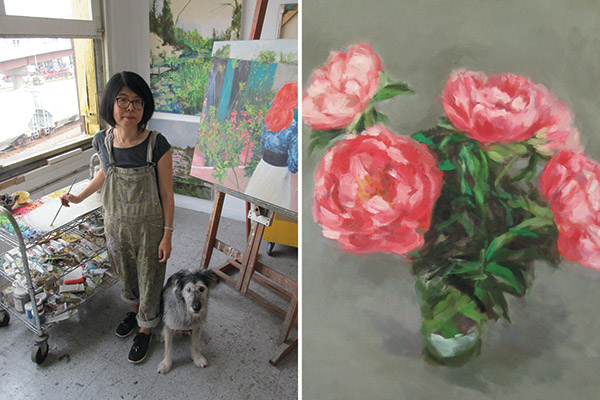 VANCOUVER — As Vancouver got quieter, and events, fundraisers, and other responsibilities fell to the wayside during the pandemic, the stillness became a way for Japanese Canadian artist Eri Ishii to reset her priorities, and focus on her painting.

Every day she would go to her art studio with her dog, and on the way home, they would go to community gardens or parks. Everything was so luscious and green, and she found solace walking in nature and reassurance in the greens and colours, and wanted to capture that in her artwork. 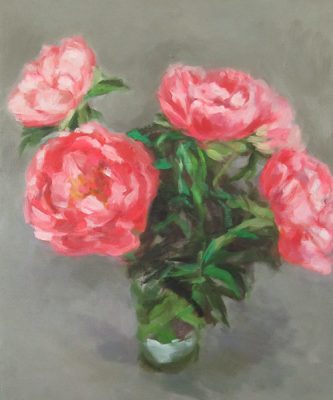 “It was really beautiful, and it [felt like] nature is bigger than what’s going on. You feel so small, but in a good way. I felt enveloped, and I thought, I want to create something that conveys this beauty and how uplifting it is for me,” Ishii tells Nikkei Voice in an interview.

With buttery oil paints, Ishii has created paintings of nature: flowers, peonies, and roses with rich layers and textures, creating depth and a sense that you could run your fingers over the canvas and feel the layers of petals beneath them.

Not expecting flowers to be such a challenging subject to paint, getting colours, proportion and texture just right, when it comes together it is like magic, she says. It has allowed her to lean on the skills she has built her entire career and her strong background in figurative drawing. Ishii moved to Vancouver from Tokyo, Japan, to pursue an art career, studying at Emily Carr Institute of Art and Design, studying and running sessions at Vancouver Life Drawing Society, and received her Masters of Arts from the University of British Columbia. Her work has been exhibited across Canada and in Japan, Switzerland, and Taiwan. 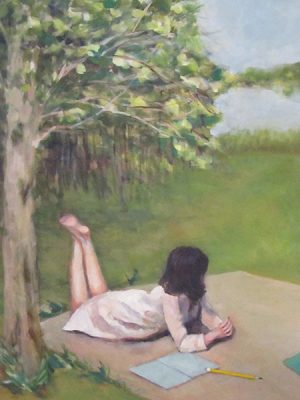 Ishii will be participating in the 24th Annual Eastside Culture Crawl in Vancouver, where over 250 artists showcase their work and open their studios to the public for two weekends, from Nov. 12 to 15 and Nov. 19 to 22. For the first time in 20 years, Ishii will be participating only virtually, uploading a video of her studio so people can see her work from the safety of their homes. As well, she will be scheduling private viewings for the public to individually come into her studio to see her artwork after the Crawl.

In previous years, Portside Studios, where Ishii and a co-op of artists have their studio spaces, invite the public in for the annual event. In the 5,000 sq. ft. space with 23 artists, about 1,400 people would come through, making it feel busier than a Tokyo subway station, says Ishii. She would do live painting demos, and visitors would come in and cheer, ask questions, and see the work she has created over the year.

“I will miss them. I have had people coming to my studio for 20 years,” says Ishii. “Every year it’s a big reunion for me so, I will miss seeing those regulars, but hopefully they will come back next year, if not this year.”

The Crawl highlights the importance of artists’ studio spaces. Ishii is the studio director for Portside Studios, where she has been painting for 12 years. In 2007, Ishii went to her previous studio at 901 Main St. to find a letter posted to the door. Addressed to the artists in the building, it said the landlord had sold the property, and they had 30 days to evacuate the premises. The building was being demolished to make room for luxury condos.

“I thought well, I’m not going down without a fight. So I ran a huge media campaign, went to city hall, and in the end, the city said we can’t do anything for you because you’re not an organization, we were a bunch of individual artists,” says Ishii. 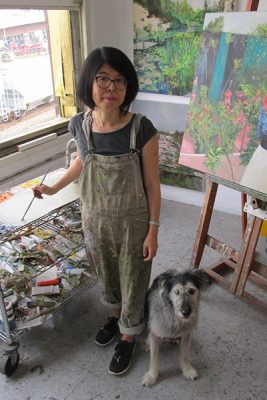 Artist Eri Ishii in the studio with her dog.

Ishii and some of the artists from the building formed 901 Artists Co-operative, a non-profit collective of visual artists with the mission to provide artists with affordable working space in Vancouver. As a collective, the group was able to negotiate a lease agreement at 150 McLean St., a bright yellow building with lots of natural light.

Over 10 years later, the collective has re-signed their lease. Last year they held their first fundraiser, supplying beer from the brewery on the first floor of the building and food from another local business, and inviting the community in to create a mural, solidifying their sense of belonging in the area.

Over the last 10 years, 400,000 sq. ft. of artist studio space and 152 buildings used as working space have disappeared, according to a study released by Culture Crawl last year. The building with Ishii’s old studio still stands empty 12 years later. An outspoken voice for artists’ rights in Vancouver, Ishii urges artists to come together, because as individual artists, they have no rights when it comes to renting studio space.

“This really opened my eyes, there’s a bigger community that wants to help artists, and once you become an organization, once you stick together with a group of artists, [you’re] no longer just helpless, waiting to get kicked out, waiting for the rent to go up. You have a say. You can negotiate,” says Ishii.

The Culture Crawl is often the only time during the year when people can visit Ishii’s studio. The rest of the year, it is her space where she can work and create. 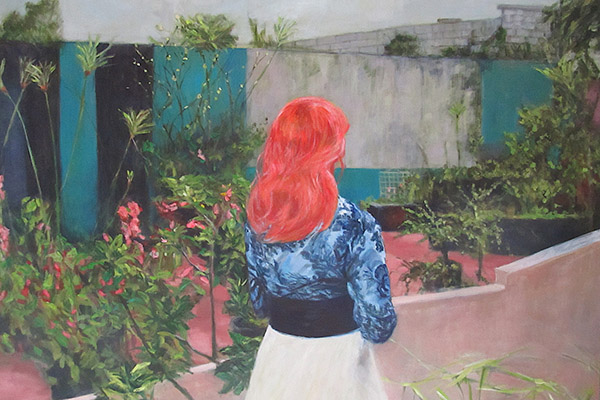 “The studio is more important than my home. [It is] where I am me, doing what I love. I open my studio for Crawl, but other than that, it’s a fairly private place, where it’s just me and my paintings, my drawings, and a dog,” says Ishii. “It’s identity, where I’m allowed and I have the freedom to be me and think and experiment and play. It’s just a wonderful space.”

It is also a space of creative energy, says Ishii. The artists are all friendly and chat with each other, but then they go into their studio space and create art.

“People making things, even in a pandemic. That’s the resilience. As long we have this, it’s just going to be okay,” says Ishii.

For more about Eri Ishii, visit: www.eriishii.com and the Eastside Culture Crawl at: www.culturecrawl.ca.