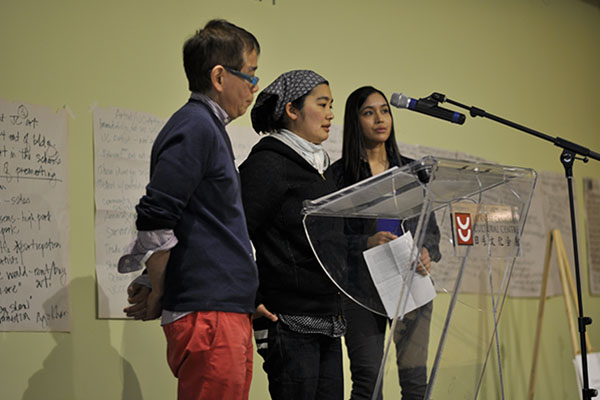 The event held in early April brought together artists from around Ontario for a number of brainstorming seminars from discussing networking strategies to the broader strokes of identity within the community.

A post-event discussion had moderators summarize what had been learned, but also highlight some of the big talking points.

“The first [session] was quite serious and interesting because people shared their experiences, often difficult ones,” Bryce Kanbara, one of the events organizers and who hosted a panel on Japanese Canadian identity, said.

“In the second panel we asked the table who spoke Japanese and there was only one out of fifteen or twenty,” Kanbara said.

He believes that by examining what has happened to the Japanese Canadian identity and the loss of language can lead to deeper, universal questions.

Some believed it’s not necessary to dwell on the past while others believed there needs to be something to galvanize the community into learning the language again.

“We kicked off with this question of, ‘Do you think of yourself as a Japanese Canadian artist’?” Ota said.

Some identified as being Japanese Canadian strongly, he said, while others believed the issue is a lot like being asked if you’re a female or male artist.

For some artists like Hitoko Okada the loss of cultural roots can lead to an aversion away from identity.

“As we’ve  moved further away from our ancestral roots the experience of being racialized can become internalized,” Okada said.

When it came to promoting Japanese Canadian artists, ideas from building cooperation within the community to holding themed art shows throughout the year were developed.

“If there’s a way we can team up or talk we can promote one another,” Michelle Chermain Ramos said.

A discussion on Japanese Canadian artists and organizations revolved around developing a presence online through social media websites like Facebook.

“There was a need to identify specific target audiences,” Jan Nobuto, who ran the discussion, said.

“We’re also talking about how organizations can bridge the linguistic divide,” Nobuto said.

Another session on networking focused on the benefits of finding people of like mind to promote and share ideas.

“Although one area starts an idea there’s a need for satellites,” Katherine Yamashita said on the importance of spreading networking efforts across large areas.

Her group spoke on finding support for artists and the need to develop collectives to identify where artists are in the community.

One of the largest discussions revolved around the creation of an online registry for Japanese Canadian artists.

There have been registries in print before, but moving into the online space might reach out to artists who are either of mixed heritage or who just don’t know there are other artists out there looking to connect.

The hope of the artists at the symposium was to continue the momentum gained at the event, which Kanbara said they would.