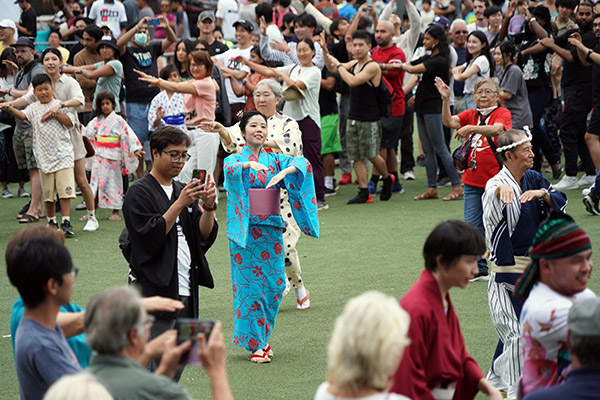 MISSISAUGA — My name is Mimi, and I am an exchange student from Japan currently living in Canada. During my time in Canada, it has been interesting to see how Canadians celebrate Japanese culture. This summer, I volunteered at Japan Festival CANADA 2022 at Celebration Square in Mississauga.

Japan Festival CANADA returned as a live in-person event for the first time since the pandemic on Aug. 20 to 21. The festival is the largest Japanese cultural event in North America, with traditional foods, live performances, and modern technology to experience and enjoy Japan. 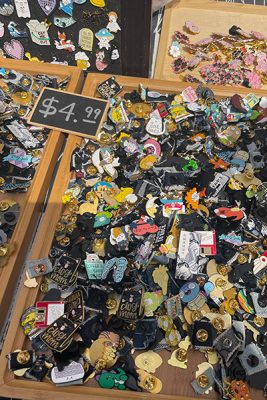 Can badges are a way for people to show off their favourite anime characters. Photo credit: Mirui Kiuchi.

Moreover, I had so much fun when I had time off. I noticed there were many foods and sights commonly seen in Japanese festivals, such as yakisoba, shaved ice, and one of my favourites, Ramune. This traditional pop brings back memories of the summer season. Many incredible things made you feel like you are in Japan. Can badges seem popular in Canada. These are a type of metal pin accessory decorated with anime pictures. People enjoyed choosing a bunch of can badges, where I was able to see how much they love anime and cool Japanese pop culture.

Additionally, some people dressed up as different anime characters. This is something I’ve never seen before. When it comes to festival outfits, kimonos are the most popular, besides casual clothes. I thought wearing costumes was also nice to enjoy the vibes. All the cultural celebrations were amazing and brought joy to festival-goers, but I noticed two things celebrated in uniquely different ways between Japan and Canada, Yosakoi and Bon Odori.

Yosakoi is a Japanese-style dance that combines modern and traditional music with vibrant choreography. This dance is well-known in Japan because students practice it in elementary school. Here you can see how audiences react to performances in Canada compared to Japan.

“Audiences in Canada give us more energy and applauses. The regulations are not as strict compared to Japan, where they can’t scream and must wear masks all the time. We were happy about the Canadian energy, and it was rewarding as performers,” said Yosakoi dance group ENTORANCE102‘s team captain Akira Kunitakake. 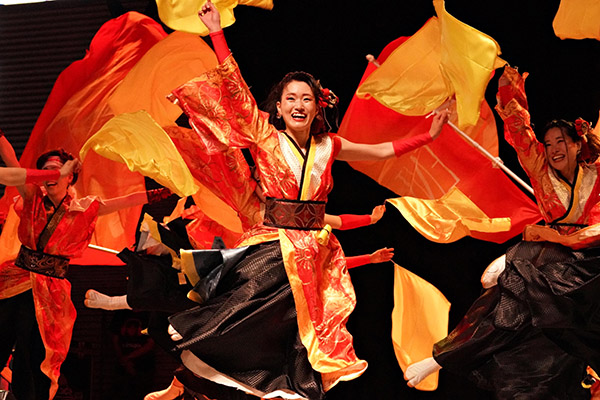 Yosakoi dancers were cheered on by an energetic and excited crowd at Japan Festival CANADA 2022 in Mississauga. Photo credit: Dr. Jonathan Eto.

I felt the same way. The crowd gave more energy to performers, which is connected to the cultural aspect of how they express their feelings in public.

Bon Odori is a Japanese dance that honours one’s deceased ancestors. People participated in this folk entertainment, making a circle around the centre.

Honestly, I was very surprised when I saw many people show their interest in the folk dance, even if they didn’t know the moves. They were very eager to learn, and I admired that. Bon Odori is a very Japanese thing when it comes to summer and brings back memories. Since the pandemic, there were very few Bon Odori celebrations until this year, even in Japan. I’m here in Canada and was so glad I enjoyed the summer festival. Here I was able to see how Japanese culture was celebrated.

From my perspective, Canadians enjoyed dancing without any hesitation compared to Japanese people. In Japan, we tend to be shy in public, even if we know how to move. They had fun and put so much passion into their dancing, regardless of age.

It was a very good opportunity to experience Japanese culture. This annual event opened my eyes to how people celebrate and embrace Japanese culture in Canada and outside Japan. To all of the Japanese  students who are studying abroad all the way here in Canada with millions of different passions and goals, I highly recommend that you volunteer at cultural events so that you can get a better understanding of Canada and Japan. 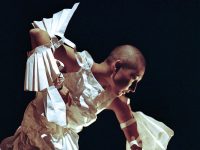 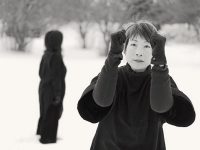