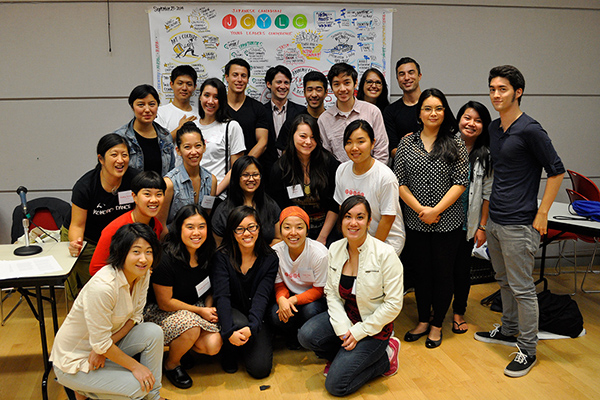 VANCOUVER – On September 26th, 2014, the Japanese Canadian Young Leaders Conference kicked off at the Carmana Plaza in Vancouver.

Participants flew in from as far as Alberta, Ontario, and the Yukon to meet other young leaders in Canada’s Japanese community.

The conference’s goal was to bring together the next generation of Japanese Canadians to help them take up the torch of preserving and forwarding the history and goals of Nikkei in Canada.

With walking tours, panel discussions, and plenty of food, participants had a chance to speak up about their experiences as Japanese Canadians.

“We had little over thirty people coming from across Canada for the young leaders conference,” Lisa Schoenhofer, board member of the OttawaJapanese Community Association and a co-chair of the Young Leaders Conference, said.

“From Ottawa, Toronto, Lethbridge, Kamloops, Edmonton, Calgary, Vancouver and Yukon, we were quite a diverse group and the energy in this group was absolutely amazing and we hope to continue this momentum and discussions about what we’re doing in our communities,” Schoenhofer said.

Running concurrently with the youth conference is the National Association of Japanese Canadians’ annual general meeting. Although held separately, participants of both events were able to interact with one another.

“This is your time,” Ken Noma, former president of the NAJC, said to the group of young leaders. “You have to take charge. There are a lot of issues… one of those being the need for more young Japanese Canadian politicians to become involved.”

“We have a lot to do and a lot to learn,” he said. “A lot of it rests on your shoulders as Yonseis, Goseis, and what we’ve done now and what we’re saying to you  is we’re now committing a substantial amount of money.”

Noma announced that the NAJC has committed $22,000 that will go toward standalone creative activities for young JCs.

He also announced that next year there will be a separate youth leaders conference.

“There are some unique issues,” Noma said. “It’s not for me as a Sansei to be in charge, so I congratulate you and hope you will keep moving forward.”

Other delegates from Vancouver’s Japanese community also visited the group.

“I’m very glad that you have a great interest and a big interest in the Japanese Canadian community,” Vancouver Consul General Seiji Okada said. 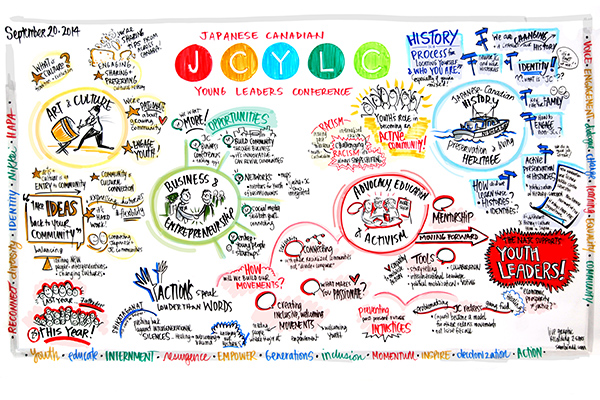 A graphic representation of the JCYLC discussions held during the second day of the conference. Image courtesy: Sam Bradd

Meeting JCs might seem like a commonplace occurrence for older generations, but younger Japanese Canadians don’t often have a chance to meet.

Whether it’s a problem of identifying who is Japanese Canadian or finding a common meeting ground, young JCs aren’t the most unified group of people.

However, events like the Japanese Canadian Young Leaders Conference help introduce attendees to the struggles the community has faced and the many personalities that make it so unique.

As a Japanese Canadian myself, I’ve seen first hand how much wisdom the community has to offer young people. After meeting young leaders at the conference, I’ve also seen how much they have to offer to the community.

With some attendees working in fields that I could scarcely imagine having responsibility in, young Japanese Canadians more and more will be bringing a new kind of energy to their interactions with the community in coming years.

It’s now up to them to continue connecting with one another and making sure that their interactions count.

In 1977, a similar conference was held and lead to the formation of the Powell Street Festival in Vancouver, which remains one of Canada’s largest fests.

So who knows what these young JCs will be able to accomplish.