Japanese Canadians and First Nations swim against the current 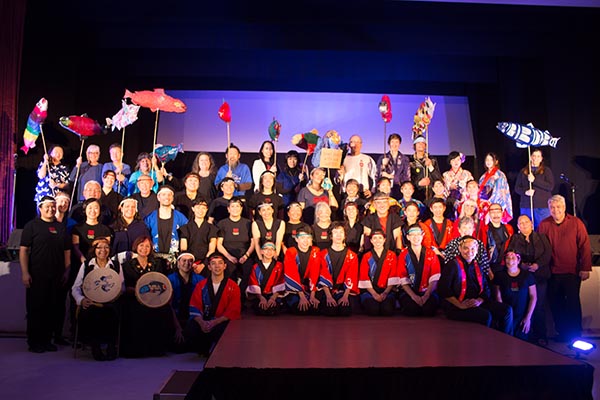 Participants of the ‘Against the Current’ production at the Japanese Language School and Japanese Hall on Nov. 6, 2015 in Vancouver, BC. Photo by: Kayla Isomura

VANCOUVER – It’s a long journey for the salmon, but every fall they begin their upstream battle. Fighting the currents and rapids, they also face the threat of predators and fishermen.

In British Columbia, salmon are an integral resource and their perseverance is what inspired a taiko performance at the Heart of the City festival held in Vancouver last November.

In the city’s Downtown Eastside, five local taiko groups came together with First Nations performers to celebrate the role of salmon in the Japanese-Canadian and Coast Salish communities.

The performance, titled Against the Current, featured original compositions by each taiko group—Chibi Taiko, Katari Taiko, Sansho Daiko, Sawagi Taiko, and Vancouver Okinawa Taiko—each telling stories of the first Japanese Canadian immigrants, in addition to the life cycle of the salmon.

In Canada, indigenous people have been fishing for salmon for thousands of years, while Japanese immigrants joined the industry when they began migrating to BC in the late 1800s.

“Gihei Kuno was responsible for bringing half of his village to Steveston back in 1888,” said Endo Greenaway, who wrote a composition for Sansho Daiko about Kuno. “He was the father of Japanese immigrants to Canada.”

Today, Steveston still stands as a fishing village in Richmond, a suburb of Vancouver adjacent to the mouth of the Fraser River.

But there aren’t as many Japanese fishermen on the West Coast, according to a veteran fisherman of more than 40 years.

Takahashi was born into a family of fishermen. His grandfather, an Issei, worked in the industry and so did his father.

Takahashi, who retired 15 years ago, started as a one-man operation at 16-years-old and slowly progressed into bigger and bigger boats. His last boat was 12-metres long, he shared proudly.

“Those were the fun days,” he said. “You got to do whatever you wanted to do. You were your own boss and you’d be in the outdoors enjoying nature.”

He said the fishing community was a mix of Japanese, First Nations, and Caucasian people who were close-knit, “especially in Steveston.”

“It was a nice community with a lot of Japanese in Steveston at the time but now it’s all changed,” he said.

With new technology, the industry is more efficient than when Takahashi was working. He also said that fishing today is more complicated with specific licenses required for different types of fishing.

“We could make a very good living but over the years . . . it slowly went downhill,” he said.

Endo Greenaway’s composition for Sansho Daiko featured a narrative about Gihei Kuno, “the father of Japanese immigrants to Canada,” he said. “Kuno was responsible for bringing half of his village to Steveston.”

Today, Steveston still stands as a fishing village in Richmond, a suburb of Vancouver, adjacent to the mouth of the Fraser River.

Other compositions were inspired by Manzo Nagano, the first Japanese immigrant in Canada, and paid tribute to the workers in BC’s canneries.

Hunter said festival organizers were immediately interested in the production when Endo Greenaway pitched it.
Fighting against the current is a theme that resonates with both communities and the current one in the Downtown Eastside.

All groups have faced oppression and racism, he said but the Japanese and First Nations communities have also shared a positive history together around fishing.

Coast Salish fisherman Rosemary Georgeson agreed. During the performance, she recounted a memory from her childhood about her experience growing up among Japanese fisherman.

“We couldn’t always understand each other but—I couldn’t describe it—we were always out [on the water] together,” she said in an interview for the Nikkei Voice. “We were always aware of each other.”

Being on the water is about trust, she said, and both communities would always watch out for one another. The people became part of the routine and the routine was like clockwork.

“Our cultures have always been side by side,” said Georgeson. “It was just as normal as breathing.”

“We’ve seen the industry fade out so both of our cultures are in the same place watching it—something that was so big and defined us in our world—fade.”

Endo Greenaway said Vancouver taiko groups first came together in 2011 for a fundraiser for the victims of the tsunami in Japan.

“This was the first time that we came together as a group,” he said. “It was quite invigorating for a lot of us.”
A few years ago, they wanted to work on another project together and someone suggested the theme of salmon.
They agreed without knowing how they would use it but the concept has clearly evolved since.

Endo Greenaway said there are no plans for Against the Current but he said, “we’ll see how it goes.”