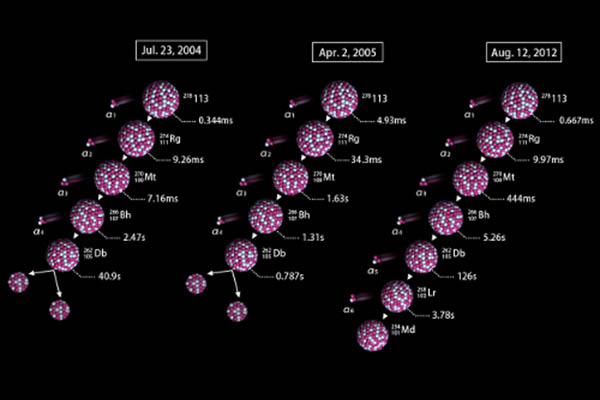 The seventh row of the periodic table of the elements has been completed with the discovery of element 113 and Japanese scientists at RIKEN are being credited for their work. Image courtesy: Riken

In late December, RIKEN, the largest comprehensive research institution in Japan, announced that their labs have been given recognition for the the discovery of the 113th atomic element, Ununtrium.

Project leader Kosuke Morita said in a statement that he is deeply moved that new element discovered by Japanese scientists, and the first discovered in Asia, will be added onto periodic table of elements.

This latest element was first reported in 2003 by the Joint Institute for Nuclear Research in Dubna, Russia and the Lawrence Livermore National Laboratory in the United States.

“Now that we have conclusively demonstrated the existence of element 113,” Morita said in a statement, “we plan to look to the uncharted territory of element 119 and beyond, aiming to examine the chemical properties of the elements in the seventh and eighth rows of the periodic table.”

A potential name for the new element, according to an article from 2012, is Japanium, but other reports say that it could be named Japonium. However, Morita hasn’t decided on a specific name as of yet. He plans to spend part of this year contemplating a name for the element.