Japan’s struggle with gender inequality in the workforce

Japan has a problem.

The world’s third largest economy has a declining and rapidly aging population, with the population falling by 244,000, in 2013, according to Japan’s Health Ministry.

With that being said, birth rates are decreasing, annual death tolls are increasing and a surge of Japanese citizens requiring welfare assistance payments is a reality that Japan is and will continue to face.

That was part of the rational for Japan’s Prime Minister, Shinzo Abe, increasing the nation’s sales tax to eight per cent, from five per cent earlier this year.

But, Japan also has another issue that is arguably just as pressing – being gender inequality in the workforce.

This year, of the most highly profitable Japanese companies that make up the Nikkei 225, only one female executive made the top-earners list.

This is an illustration of the gender income inequality that’s prevalent in Japan and around the world.

Nicole Seligman, the president of Sony Entertainment Inc., is the only woman who cracked the list, earning ¥100 million (yen) or $978,000 according to Bloomberg.

She is an American, who lives in New York.

The top earners on the list were Kazuo Kashio, of Casio Computers Co., who earned ¥1.2 billion in annual compensation and Jujio Mitarai, who earned ¥1.1 billion according to the list, which was a compilation of the salaries of the top executives from the 225 highest earning companies in Japan.

In Japan, the female labor participation rate increased to a record 64 per cent, which is still significantly lower than the 82 percent rate of men, according to the Ministry of Internal Affairs and Communications in 2011.

To put this into perspective, in the same year, 82.1 per cent of Canadian women age 25-44 were active members of Canada’s workforce.

While Canada does have a higher percentage of women in the workforce, it too is far from perfect.

The income gap between men and women was 26 per cent in Canada, according to 2011 Statistics Canada data.

Meaning that in annual earnings, Canadian women receive 74 cents for every dollar that their male counterparts made.

In Japan, two thirds of women leave the workforce when they have children and women make up the majority of part-time and temporary workers, receiving less benefits and security.

As well, very few women hold senior positions in Japanese companies. Only 4.5 per cent of company division heads were female, which is an increase from the 1.2 per cent in 1989.

Executive level managerial positions in Japanese companies held by women were even lower, with women being in an executive managerial role only one per cent of the time, according to a regional study by McKinsey.

With Japan’s workforce decreasing in size, and Japanese women often on the outside looking in, doesn’t it seem as if it’s time for Japan to embrace women in an increased role within the workforce?

After all, a 2014 study cited that for Japanese women, being put into “dead-end” roles was the number one reason for quitting their job.

It’s clear that many women are finding work, but they are not getting the kind of responsibilities or level of work that they’re capable of doing.

These women are undoubtedly capable of more than merely pouring tea in an office place.

When Japanese firms take their pick of the freshest crop of university graduates, due to cultural norms, they are typically expected to remain in that job for the rest of their lives.

It’s about time that Japanese companies and the people who are in charge of hiring and promotions open their minds to the equality of both sexes.

While Japan’s Prime Minister, Shinzo Abe has set a goal to increase the number of women in managerial positions to 30 per cent by 2020, the plan is far from looking realistic. After all, policy can only do so much if companies aren’t willing to embrace women in leadership roles.

Prime Minister Abe’s wife, Akie recently pointed to the challenge of trying to change the workplace dynamics,”If the leadership promoting creation of a society where women shine is occupied entirely by men, such a society will reflect only men’s perspectives. So in this regard also, it is an urgent task to appoint women to key positions.”

With a workforce that’s in need of workers with more and more retirees, and women often feeling as if they’re on the outside looking in, it’s clear that both of these problem aren’t going away.

The cliché that change takes time rings especially true for a traditionalist Japanese society, but ironically, a key part of the solution to Japan’s declining workforce has been there this entire time.

Give them a chance. 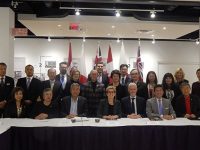 
Your article is related to another one that was written by a Japanese student,

I wonder if we can use your photograph, diving you the due credit.