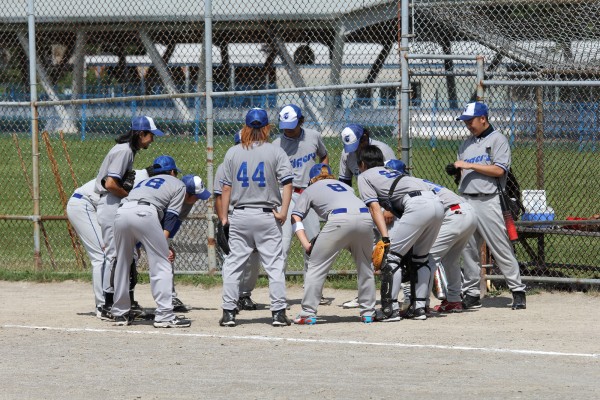 TORONTO – The 2013 Japanese Canadian Baseball League season is in full swing down on the diamond at Greenwood Park, and the season has had its full share of surprises throughout the league.

The most exciting news of the off-season was the addition of a seventh team to the long-time six team league, as the Brewers have joined for their first season of play. This has bumped up the Sunday game count from three to four, with one team playing a double header each week. The JCBL is an adult, recreational baseball league, and the addition of a seventh team is a positive sign that the league is strong and growing.

The start of the season has produced some excellent, tight baseball, and shown some surprise results. There are three weeks left in the regular season before the playoffs begin in August.

The defending champion Tigers still appear to be the class of the league so far this season as they sit atop the standings with a 6-1-1 record. The pitching tandem of Tsukasa Murakoso and Daiki Nishiwaki has been dominant and the key to the Tigers’ success so far. On offense, Osamu Shinya has been excellent despite only playing three games, with five RBIs in seven at bats. Rei Tsuda leads the team with nine hits. The clutch offense has been spread around as four different Tigers players have five RBIs each.

The second place Giants have been the surprise of the season, so far, as they have improved their play immensely after finishing at or near the basement of the league for the past two seasons. The 4-2-2 Giants got off to a hot start this season, and excellent leadership and commitment from veterans Terry Lee and Jeff Sagara has largely been responsible for the turnaround. Sagara has been his stellar self on the mound with key help from Alex Piche-Abe. Dwight Wakabayashi leads the league with 12 quality at bats and seven runs scored and the addition of speedster Kyohei Maki has provided a nice boost to the lineup with six hits and five RBIs.

Perennial contenders, The Warriors are tied for second place and right where they usually sit year after year in the JCBL. The Warriors are always in the mix to win every game and are a threat to win the title again this season. Kento Takamoto has been the busiest pitcher on the team with a 1.31 ERA in 16 innings pitched and Takumi Tabata has helped with 12 strong innings as well. The offense is led by Yuichi Sahashi with six hits and five RBIs, and Sam Yamada has six hits as well.

After finishing last season with a record of 5-7-1, Tanino has shown much improved play this season and sit in fourth place with a 4-3 record. Daniel Mukai has been one of the most prominent players in the league on both sides of the field as he is second in the league with a .529 batting average and tied for first in RBIs with six. Mukai has also done a bulk of the pitching for Tanino as well and sits second in strikeouts with 23. Sean Izukawa has also been an offensive catalyst all year for Tanino.

Last season’s best team in the regular season and runner-up for the league title, the Yosakoi Whales have struggled out of the gate this season and sit at 3-4. Yoshiyuki Matsuhashi, Taro Akiyama and Kazu Ishihara have all been solid offensively, but the loss of last year’s ace Daisuke Haba has really hurt the Whales on the mound.  Veteran hurler Mike Takahashi has assumed the bulk of the load this year with some help from flame thrower Daisuke Suzuki. The Whales are never to be counted out of any game.

The newest team in the league, The Brewers are getting all they can handle in their initiation season in the JCBL. They currently sit in sixth place in the league with a 2-5-1 record. Brewers’ ace pitcher Jason Gordon has made an immediate impact on the league on both sides of the field as he leads or shares the league lead in many of the league’s offensive categories including RBIs with six. Gordon has also been dominant on the mound with 26 strikeouts and a 1.45 ERA. Stuart Campbell has also been solid at the plate for the Brewers with five hits and four RBIs.

After showing a slight resurgence in 2012, Asahi sits in the basement of the JCBL so far this year with a 1-7 record after seven games. Despite struggling early in the season, Asahi is a veteran laden team that has been in the league for many years and are always dangerous come playoff time. All seven teams make the JCBL playoffs with the first place team gaining a first round bye, so Asahi has time to get their game in order. Hai Le has been strong at the plate with four hits and five runs scored in 14 appearances at the plate, and Roman Pena has three RBIs. Jun Ueno has been the busiest on the mound and has six strikeouts in 12 innings pitched.


[…] Japanese Canadian Baseball League is set to begin the 2013 playoffs on August 11th, at Greenwood Park and based on the tight results […]

Tigers ousted, four teams on the brink in the JCBL Playoffs | Nikkei Voice