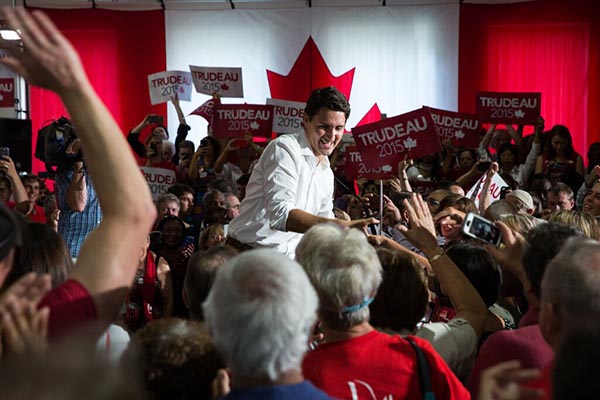 OTTAWA – In 1968, Pierre Elliott Trudeau was elected as Canada’s prime minister and 47 years later his son, Justin Trudeau, steps into the role.

Last night, the Liberal party won a majority government with 184 seats. It was a stunning victory for the party that fell to just 34 sates in the 2011 election.

In a speech following the win, Trudeau has said he will be an ambitious prime minister and promised a more positive vision for the country.

“We defeated the idea that Canadians should be satisfied with less, that good enough is good enough, and that better just isn’t possible. Well, my friends, this is Canada and in Canada, better is always possible,” Trudeau said a speech following the win.

In the 2011 election, the Liberal Party, under the leadership of Michael Ignatieff, fell to just 34 seats and allowing the NDP to become the official opposition in government.

Outgoing Progressive Conservative leader Stephen Harper said he congratulated Trudeau and said that although this wasn’t the result he wanted it is the will of Canada to elected a Liberal government.

“The disappointment you also feel is my responsibility and mine alone,” Harper said in his concession speech. “But know this for certain, when the next time comes this party will offer Canadians a strong and clear alternative based on our conservative values.”

The Conservative party has now begun the process of finding a new interim leader as Harper stepped down from the leadership position. He will continue on as a member of parliament for Calgary Heritage.

NDP leader Thomas Mulcair was also able to hold his seat in Outremont, Montreal, but many are speculating if he will step down – as Harper has – following the defeat.

Losing almost 60 seats, the NDP holds a far cry from the power they once held following the last election.

“I want you to know that we will work for you, each and everyday in this new majority parliament,” Thomas Mulcair said. “With this election, Canadians have all asked us to work for them and we will not let them down.”

Mulcair says his party intends to keep the new prime minister to the promises he made during the election.

And some of those promises include: bring out tax changes and reversing the Conservative government’s double of TSFA limits, an inquiry into missing and murdered aboriginal women, which the former government was unwilling to begin, revamping child benefits for Canadians, taking another look at Bill C-51, infusing money into building Canadian infrastructure, electoral reform, and legalizing marijuana.