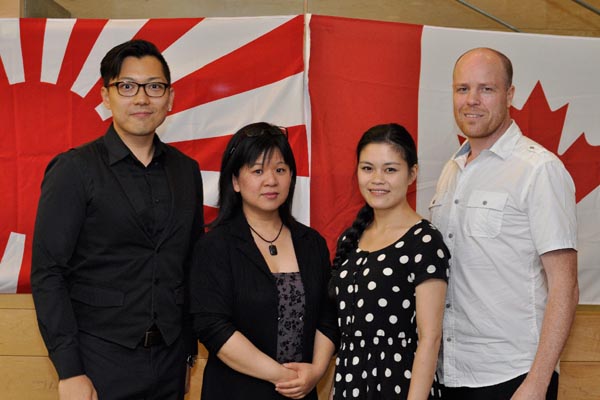 Benaldo Yeung, Karri Yano, Loretta Yu, and Evan Mackay at the media opening for Interrogation: Lives and Trials of the Kamloops Kid. Photo by: Matthew O’Mara

TORONTO — Separated by armies and an ocean, brother and sister Kanao and Martha Inouye could only communicate through their letters.

Kanao, who was living in Japan during the Second World War, struggled to prove his loyalty to his country while plagued by doubts of his cultural identity.

Born in Kamloops, British Columbia, Kanao was a Japanese Canadian, but had been forsaken due to the war.

He would become an interpreter and prison guard for the Imperial Japanese Army and earn an infamous title for his actions overseas.

“The Kamloops Kid” and Canada’s only Japanese-Canadian war criminal is how hindsight sees Kanao, but his great niece Karri Yano and playwright Evan Mackay hope to shine a new light on his story in Interrogation: Lives and Trials of the Kamloops Kid.

“It’s an exploration about how much we choose our own identity and how much is imposed on us,” Yano told Nikkei Voice in an interview.

“I think he was caught in between Canada and trying to prove his loyalty to Japan, and that’s the personal take we’re taking with the play,” Yano said. 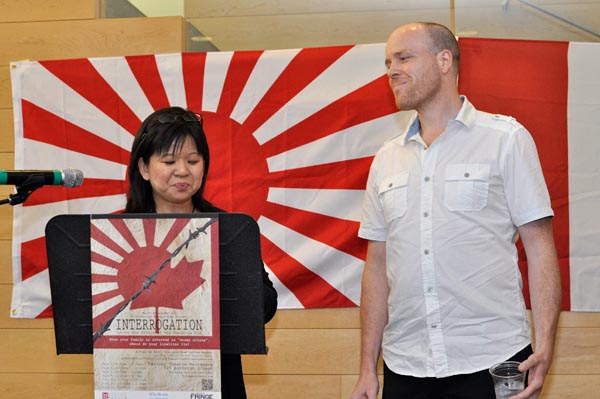 Karri Yano and Evan Mackay at the media opening for Interrogation: The Lives and Trials of the Kamloops Kid. They have been working on the script as the opening night looms.

The script they’ve written is based off of Kanao Inouye’s experiences. It’s also been informed by a previous script written by Mackay called Father Hero Traitor Son that examined Kanao’s father who was a Canadian war hero.

During the Second World War, Martha Inouye was living in Canada and interned in the Popoff internment camp. For the purposes of the play, Yano states, Martha’s life will be set in Tashme, another camp in the interior of British Columbia.

When Japan attacked Pearl Harbor, Japanese Canadian were soon declared Enemy Aliens and forced out of their homes.

Located in the interior of British Columbia, conditions in Tashme were difficult for the internees there. They were forced to live in small, unheated shacks in the dead of winter, which became unbearably hot in the summers.

Toronto-based actress Loretta Yu says that there is a lot of responsibility in portraying Martha, but she also hopes that this role can shed light on this important story.

During the 55-minute show, Martha’s character will help bring another perspective to the story of the Kamloops Kid.

“Growing up with a member in your family referred to in public as this evil archetype of some shameful thing, but it’s a much broader story than that,” Yu tells Nikkei Voice.

“To humanize him and tell the story that he’s not necessarily disturbed or did what he did out of malice… it’s about humanizing him outside of his title as the Kamloops Kid,” Yu said. 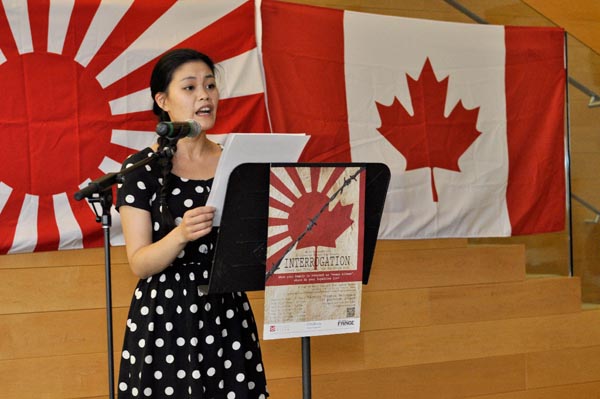 Loretta Yu, seen here, will be playing Martha Inouye who is living in an internment camp during the Second World War.

And playing Kanao is another Toronto-based actor, Benaldo Yeung.

For Benaldo, playing the character had him questioning how people see you in Canada. While you grow up here if you look different from everyone else, it makes you feel as if you are an “other” in society.

“Even being in Toronto people look at you and ask, where are you from?” Benaldo said in an interview.

“I’m from here, from Toronto,” Benaldo said. “It comes back to the whole identity part. Am I Canadian? My parents were from Hong Kong, so what do I identify with? It’s a struggle to know who you are and how you want to present yourself.

To Benaldo this is a direct connection he has to Kanao Inouye’s character. 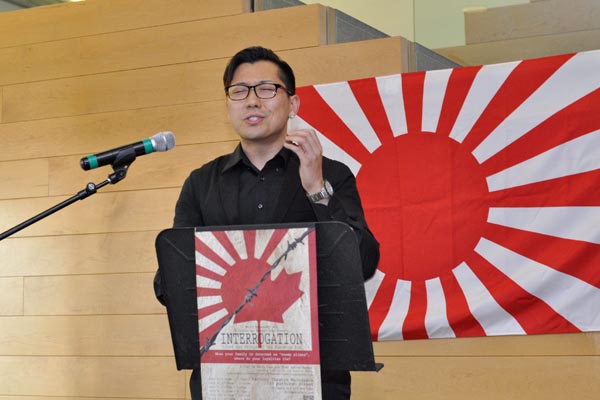 Kanao was in Japan in his early 20s and he’s trying to show his loyalty to Japan. He speaks the language and his family is there, but he wants to be part of the deeper heritage that he wants to belong to.

As his character’s connection to Canada, Yu has also had to ask these tough questions of how history has portrayed the Kamloops Kid.

“There are a lot of factors that go into their identity,” Yu said.

“And when you’re put under certain circumstances in your life, how far would you go to protect yourself or your family? Those are questions we can all really sit down and ask ourselves.”

And audiences will have a chance to see how they portray Kanao for themselves at the beginning of July when the show makes its premier at the Toronto Fringe Festival.

The show’s opening night is on July 1st and is part of the Toronto Fringe Festival: fringetoronto.com/fringe-festival

Nikkei Voice is a media sponsor for this theatre production. 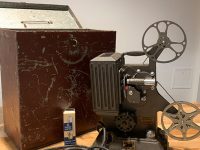 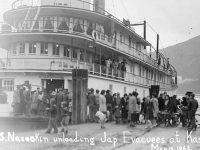 
The reason i think he was so hateful/ evil was because in canada they discriminated against him & he had a chance to get back. Canadians were mean to him.my grandfather,Edward Toews personally new what he did to soldiers and knew who he killed.He was the worst one Ed Toews was a wpg grenadier and a japanese prisoner of war at the camp were Kamloops Kid enjoyed his torture. You people sugarcoat it, they hung Kamlloops Kid because he deserved it. CToews


My grandfather was at camp sham shui po