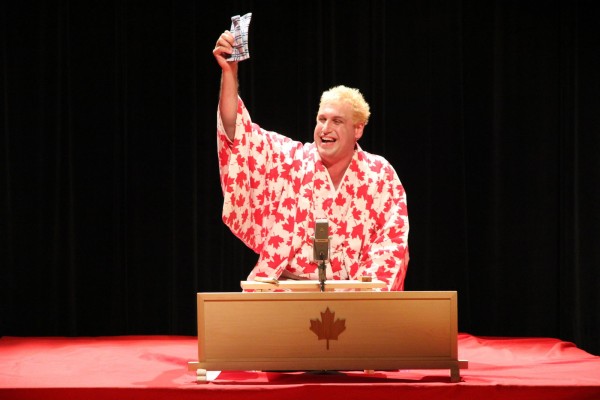 Rakugo is a 400-year-old tradition of comic storytelling in Japan. Storytellers, wearing kimonos and brandishing fans and a hand towels as props, kneel down on a zabuton (a Japanese cushion) and engage the audience in elaborate skits. Depending on the story, the fan is used to represent and act out various objects such as chopsticks, a pencil, or a fishing pole. Similarly, the hand towel takes on a number of roles as papers, a book, a dish, or a wallet. Performing alone on the stage, these storytellers make use of skillful words, tones, facial expressions and gestures to act out many roles on their own. The performance is a versatile form of traditional performing arts. People who perform Rakugo are known as Rakugo-ka.

In Japan, there are more than 700 professional Rakugo-ka, but there is one who is a notorious and fascinating performer with blonde hair. This one-of-a-kind person is  桂三輝 (Katsura Sunshine), and he was born in Toronto, Canada. 三輝 is his surname given to him by his master, and its meaning is ‘special’. 三 is pronounced as ‘Sun’ in English, and 輝 means ‘shine’ in Japanese. The name Sunshine is derived from a combination of Japanese and English components!

After graduating from UofT, Sunshine, who was interested in Noh and Kabuki (classical Japanese musical and dance drama), flew to Japan alone to pursue his passion. He bumped into and fell in love with the performing art of Rakugo. He was supposed to stay in Japan for six months, but he has ended up being there for over 13 years and lives in Japan to this day. Sunshine later moved to Ise City, Mie prefecture, and regularly performs his Rakugo in his theatre-renovated-house.

Sunshine is the only non-Japanese Rakugo-ka in the Kamigata-Rakugo circle, a type of Rakugo popular in the Osaka region. Compared to Edo Rakugo, a prevalent form of Rakugo in the Tokyo area, the key yet slight differences are in the particular intonation and unique phrases used during a performance. Due to these delicate distinctions, it is almost impossible for Japanese from other regions to master the Osaka dialect. However, Sunshine is able to speak it amazingly well.

Form is also an important part of Rakugo and it consist of two categories: Koten Rakugo, which is a traditional form carried over from generation to generation, and Sousaku Rakugo, which is a freeform created at a liberty of an individual performer. Sunshine’s master, Katsura Sanshi known as 六代目 桂 文枝 (6th Katsura Bunshi), is an expert of Sousaku Rakugo, and is one of the most prominent performers in Japan. Sunshine has been shaking things up in the contemporary Rakugo circle, and has made himself into a sensation, as his name implies. He translates the Rakugo, created by his master, and performs it in English. He even produces his own versions of Rakugo in both Japanese and English, and performs on the international stage. We spoke to him at the JCCC about his life as a Rakugo and his long journey to becoming one.

The following dialogue is based on an interview with Sunshine.

Nikkei Voice (NV): What made you want to learn Noh and Rakugo?

NV: However, you are a Rakugo-ka now. Why did you fall in love with Rakugo?

KS: Five years had passed since I came to Japan. When I first saw Rakugo, it seemed to have the elements of comedy, classics and drama characterized by individualistic interpretation. On top of this, it has kimono, Japanese lanterns, shamisen music, zabuton and many Japanese ornamentation. Everything that I have been interested in in my entire life was here all in one place, thus I was so inspired. I was like, “This is the thing I was looking for!” After I finished watching it, I asked how to be a Rakugo-ka. Then I knew that I needed apprenticeship called Shugyo and there was no foreign Rakugo-ka, so I thought it was impossible to become a Rakugo-ka at that time. Afterwards, I heard there was a monologue performance called an Accordian-Mandan and you would be able to be called up from Rakugo circle if you talked about something funny. Then, somebody told me “If you’re interested in Rakugo, why don’t you start with Accordion-Mandan?”, and I said “Ok, let me try.” I began with it and gradually got job offers. The more I studied Rakugo, the stronger my desire to be a Rakugo-ka became. That’s because I could not forget my first taste of Rakugo. That was so intense. Eventually, I met Katsura Sanshi and fell in love with Rakugo again. I was pretty sure that Rakugo could be impressive for Canadian if I translated his Rakugo into English. Anyway, I just wished I could be with him.

NV: A Rakugo-ka gets his or her name from a master after three-years of Shugyo. Sunshine did his Shugyo under Sanshi. What do you learn from Shugyo?

KS: A Shugyo is indispensable to become a real professional Rakugo-ka. You need to stick to your master for three years to study his character, and not only Rakugo itself. During Shugyo period, you never get a compliment. You just keep apologizing for three years. There is an idea that you must spend whole three years to read between the lines. For instance, when your master says “Give me that”, you have to recognize exactly what that is. The theory behind this idea is that you will not be able to reach out and appeal to the audience, for example what kind of story they want to listen today, until you can understand and interpret the feelings of your master. Although you learn Rakugo, the Shugyo period is mostly a care-giving for your master. You do laundry, clean up his rooms, fold his kimono and run errands for him. In addition to that, there are so many rules to keep: you cannot drink, you cannot smoke and you cannot date with women. You don’t know when he calls you up even late at night. Ironically, in other words, the main part of the Shugyo period is not for studying some Rakugo stories.

NV: What has been the most challenging part of performing English Rakugo?

KS: I thought I had to adopt and slightly change Rakugo to get Western people understand it because it is kind of difficult for them to appreciate the Japanese unique culture. I was expected to be the only person who could do that, so I made a great effort to pursue the goal. However, as I performed in Canada, I noticed that my performances were much better when I performed in a way that closely resembles the Japanese style. I mean, it’s better to play a long 400-year-old Rakugo itself rather than to remake it and to make it simple for them to understand easily. My lifelong work is to make Canadian and Western people listen to Rakugo in the same feeling as Japanese listen to Japanese Rakugo. I don’t have to forcefully adopt it, but simply believe Rakugo and its greatness. It took a long time to discover that.

NV: What is the most unique thing that you’ve ever discovered in Japan? Something that you cannot see here in North America?

KS: It’s definitely the Rakugo world. Imagine after you have done Shugyo for three years, you will be able to get some opportunities to perform. At first, this seemed like learning the violin from a prominent teacher. In this case, your teacher and you are in a fair position because you pay the tuition and he or she teaches you. However, I noticed that idea was totally wrong in the Rakugo world. During Shugyo period, my master paid for my house rent, treated every meal, and provided me allowance.
In addition, he named me Katsura Sanshine so that everybody can recognize that I’m an apprentice of Katsura Sanshi. Even after Shugyo, he still acts as a mentor to me. He gave me too many things and I am extremely grateful for this. I was always wondering how I could repay this debt and acts of kindness, but I ended up noticing it was impossible to repay it. All I can do is to brush up my performance skills and improve so that I can teach to the next generation of Rakugo-ka, so that the Rakugo world can remain prosperous for a long time. There is unique style of apprenticeship is not seen in North America.

NV: Any last comments for our readers?

KS: I will play in the Winter Garden Theatre in Toronto. In my opinion, it is the most beautiful theatre across all of Canada. In the theatre, you feel like you are in the forest. This year is the 100th anniversary for it. Actually, it has been my dream to perform there since I was a dramatist, and I am about to realize that dream. So, October 5th is going to be a very precious day.
Now, I’m doing something unbelievable that I bring Japanese culture to Canada. I know I still need more experiences, but I really want as many people as possible to appreciate the art of Rakugo, so please see my performance and give me a review!