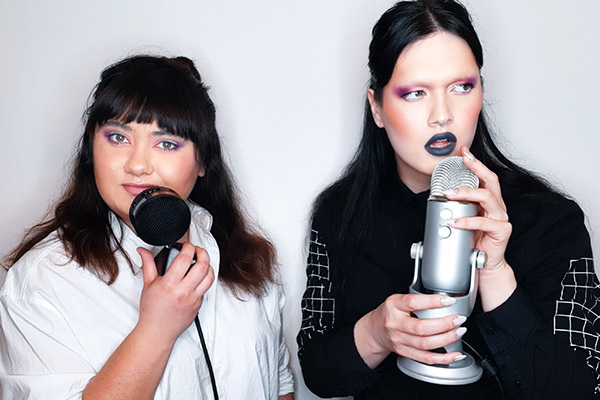 VANCOUVER — Kiyoko Sugimoto and Sakura Yoshida take a deep dive into what it means to be a mixed-race Japanese Canadian millennial in their podcast, The Hafu It. In the weekly, independently-produced, and unscripted podcast, the two women explore topics that range from the Japanese Canadian experience to current affairs and pop culture through humour and personal anecdotes.

The podcast, which launched in December, recently wrapped up its first season at the end of May. The season ended with a four-episode collaboration with the Vancouver Japanese Language School and Japanese Hall (VJLS-JH) and the explorASIAN Festival for Asian Heritage Month.

In their series with VJLS-JH, Sugimoto and Yoshida discussed rediscovering their heritage as mixed-race Japanese Canadians. By amplifying the mixed-race experience, they hope to create a sense of belonging and community for other mixed-race people, similar to what the two friends felt when they first met each other. Two years ago, the two met through work and instantly felt a connection over shared mixed-race identity.

“I really noticed in our first year working together that there were very strong similarities between a lot of our experiences growing up, even though she grew up on the East Coast and I grew up on the West Coast,” says Yoshida.

Sugimoto was one of the first mixed-race Japanese Canadians Yoshida met who wasn’t a family member. Becoming friends and finding similarities in their experiences has strengthened their identities as Japanese Canadians, adds Sugimoto. 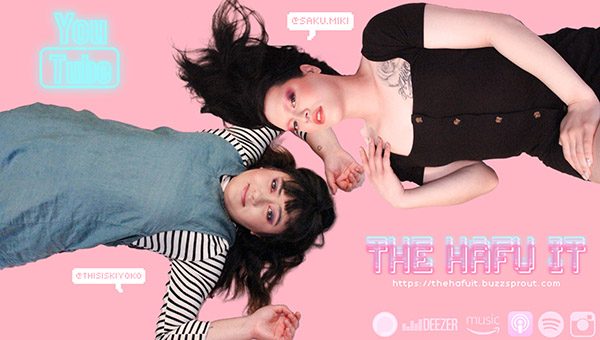 The Hafu It podcast is available on all podcast streaming platforms. Photo credit: The Hafu It Podcast.

Sugimoto grew up in Toronto and had little involvement in the Japanese Canadian community there. Growing up with Asian friends who lived in more traditionally Asian households, she felt inauthentic in claiming her Japanese Canadian identity.  She remembers wanting to wear a kimono for her middle school graduation. Her Obaasan excitedly started pulling out the family kimonos and dressing Sugimoto in one.

“I remember looking at myself in the mirror and thinking that doesn’t belong on you. This is appropriation, this is wrong. And I felt embarrassed,” she says. “I went out and bought a different dress so I would not stand out in the way that would draw attention to me, where I would have to explain that I have Japanese roots, out of genuine fear that no one would believe me.”

Since moving to Vancouver, meeting Yoshida, and attending community events like the Powell Street Festival, Sugimoto found confidence in identifying as Japanese Canadian.

“I’m really thankful that I’m here now, confident in who I am and knowing that I can wear a kimono and pull it off because I am Japanese, and it’s not up to anyone else [to decide].”

Yoshida grew up in a predominately Caucasian community in the B.C. Interior, and always knew she stood out as not white. She learned to play taiko at the local Buddhist church and realized she didn’t quite fit in there either, unable to speak Japanese, people assumed she was Caucasian.

“I knew that when I looked in the mirror, I saw a Japanese person, and so it was always just very confusing to me why other people didn’t see that,” she says. “Now that I’m an adult, I’m so proud to be mixed-race. Being mixed-race is such a huge part of my identity.” 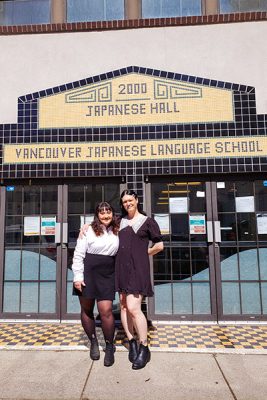 Something that has solidified Yoshida’s identity as a Japanese Canadian was learning her family history. Shortly after their podcast launched, VJLS-JH reached out to collaborate for Asian Heritage Month. Yoshida and Sugimoto recorded four episodes in the historical building, discussing Japanese Canadian history and culture and learning about their family histories.

Yoshida knew very little about her family history, it was never written down and her family didn’t talk about it. On the podcast Sugimoto presented Yoshida with family documents obtained from the Landscapes of Injustice archives, along with documents from other historical and online databases. To see this evidence of her ancestors’ history, to hold it in her hand in such a culturally significant space like the VJLS-JH, was an emotional and spiritual experience, says Yoshida. She learned when her family immigrated to Canada, the vessel they arrived on, and saw the government files related to her family’s internment through Bird Commission and Office of the Custodian files.

“Learning where they came from, when they emigrated, none of that information was available. So having that makes my family’s story and my story so real, and I think that was one of the largest things that contributed to me feeling a little bit more comfortable with my identity,” she says.

Meanwhile, Sugimoto has extensively researched her family history, working on a documentary exploring her cultural roots in Japan, before the pandemic put it on hold. Sugimoto, who was close to her great-grandmother and great-grandfather, who she called Obaasan and Ojiisan, felt the push to explore her history as they got older. Told not to ask her great-grandparents questions about the war, they began having fewer reservations about telling their story as they got older, Sugimoto says. In her second year of university, she interviewed her Obaasan for a documentary about her family history.

“At that point in my life, I barely knew anything about my family. I was always told never to talk to [Obaasan and Ojiisan] about the war. And they said, ‘Why don’t we tell this story?’” she says.

That became the springboard for Sugimoto’s family research, even connecting with a distant relative in Japan. After her Ojiisan passed away, she began uncovering parts of his family history that even her Obaasan didn’t know, even after 70 years of marriage.

“She said to me during some of our earlier conversations, I don’t understand why you’re so interested in this,” says Sugimoto. “But later, towards the end of her life, [she said], ‘I really wish that I asked those questions. I’m really proud of you for going out there and doing all of this work. You’re telling me things about your Ojiisan that I didn’t even know.’”

This exploration into family history has also started conversations for both Sugimoto and Yoshida within their families. For Yoshida, her father is now more willing to discuss family history and the recent rise in anti-Asian violence. For Sugimoto, she does this research so her three-year-old sister will be proud of her heritage and family history. 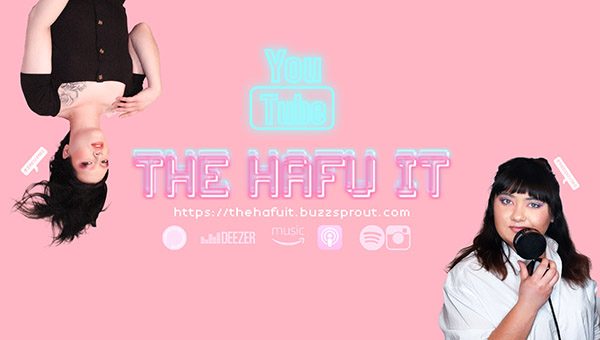 The Hafu It podcast is available on all podcast streaming platforms. Photo credit: The Hafu It Podcast.

While some of the topics about identity, culture, and history they cover on the podcast are heavy, the podcast also delves into pop culture, discussing topics like Sanrio, Japanese food, manga, and origami. They reminisce on the Japanese pop culture that the millennial generation grew up on and current pop culture with humour and insightfulness.

The podcast has built a community of listeners, mostly in Canada and the U.S., but also in Japan and Europe. Whether similar or different experiences, the podcast had led to insightful conversations with listeners.

While the podcast wrapped up its first season at the end of May, Yoshida and Sugimoto are already floating around new ideas for the next season. They are hoping to introduce a new structure, open the conversations to new people through interviews, and cover more political content.

“It’s been a really incredible experience to get to touch base with people who are not even from Canada who are mixed with Japanese and have the same experiences that we have. It’s even more validating to be able to see that the content we are putting out is relatable,” says Sugimoto.

“It always goes back to what we wished we had when we were kids,” adds Yoshida. “I just want [the podcast] to be something that an isolated mixed-race Japanese person living in North America can listen to and have some connection to the community, so they don’t feel so alone.”

Listen to The Hafu It here. Please note some episodes contain adult themes and language.