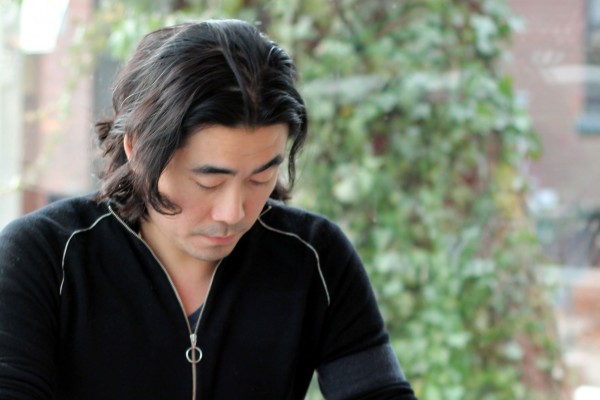 Whether you’re an amateur or master chef, a sharp knife is one of the essential tools you need to cook. A good knife, however, isn’t something we all think about on a day to day basis.

While we use these tools all of the time from eating food to cutting open packaging, that rusty blade inside your knife block on your kitchen counter can be sharpened to a fine edge, but no knife is made equal.

Nikkei Voice had a chance to sit down with owner of KNIFE Eugene Ong to talk about the importance of sharpening your knives and the artistry involved with the creation of his store’s selection. 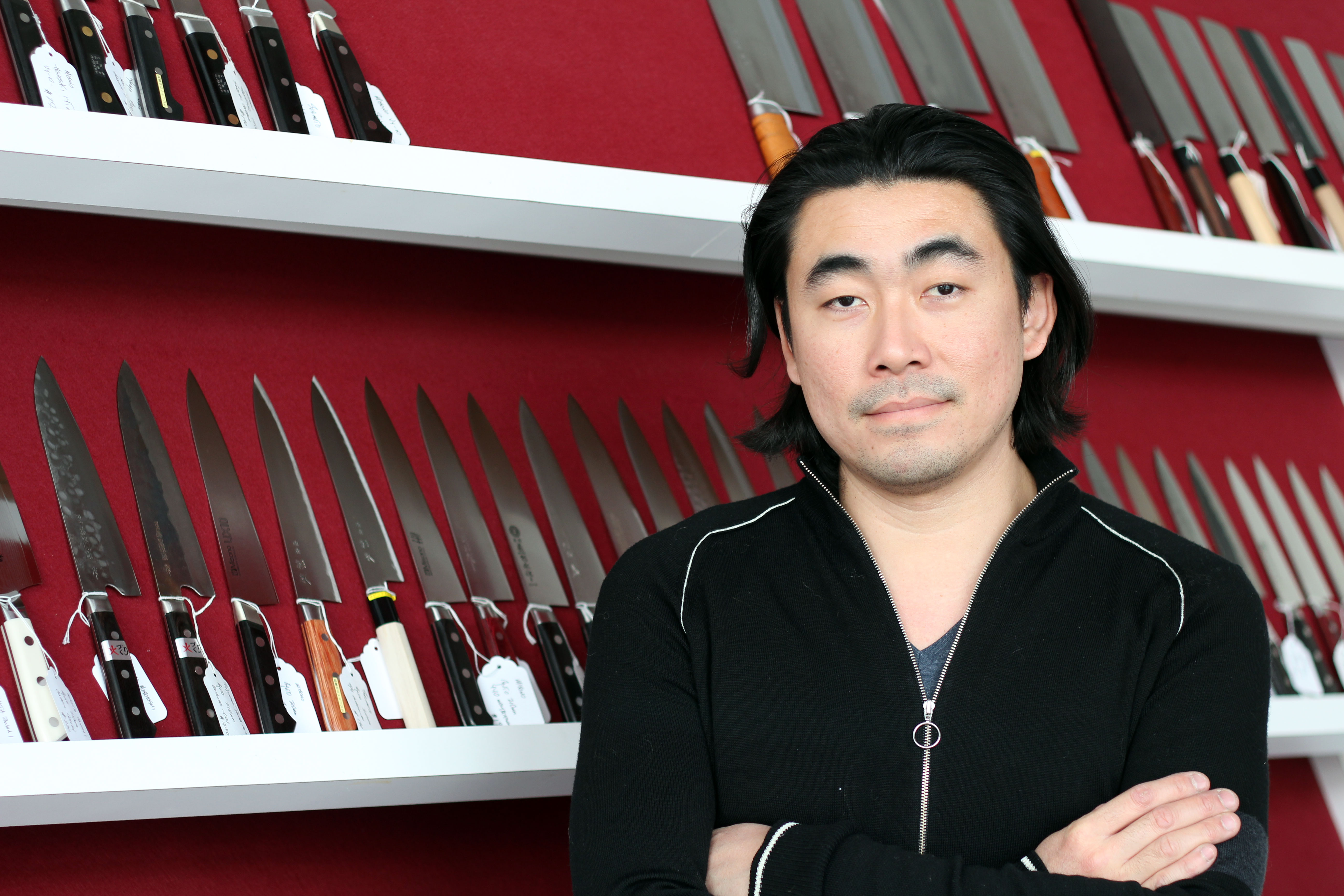 Eugene Ong, seen here, has been the owner of KNIFE for four years. His love for knives comes from twelve years spent as a chef and knowing how important a sharp blade is to own.

Nikkei Voice: How did KNIFE get its start in Toronto?

Eugene Ong: I cooked for twelve years or so, I obviously love knives and did a little traveling and a bit of that was in Japan. When I was there, you see the knife shops and you get pretty obsessed. I just had a thing for knives for years and when I got back to Toronto there just wasn’t a place for them here. That was about four plus fives years ago now. My last shop that I opened four years ago on Queen was a super dinky, little, weird second-floor about a third of the size of this room. It definitely got our name out very word-of-mouth and got all of the chefs and food types around on board. And we’ve been in this location since June.

NV: What was the selection like in Toronto before you came along?

EO: Locally it was definitely just the Williams-Sinomas. They had Macs and stuff that was huge when I was working. In the late 90s, Mac and Global Knives were all the rage, but as far as what I carry here… well, there are other shops that have opened since I’ve opened, but this kind of quality definitely didn’t happen in Toronto. 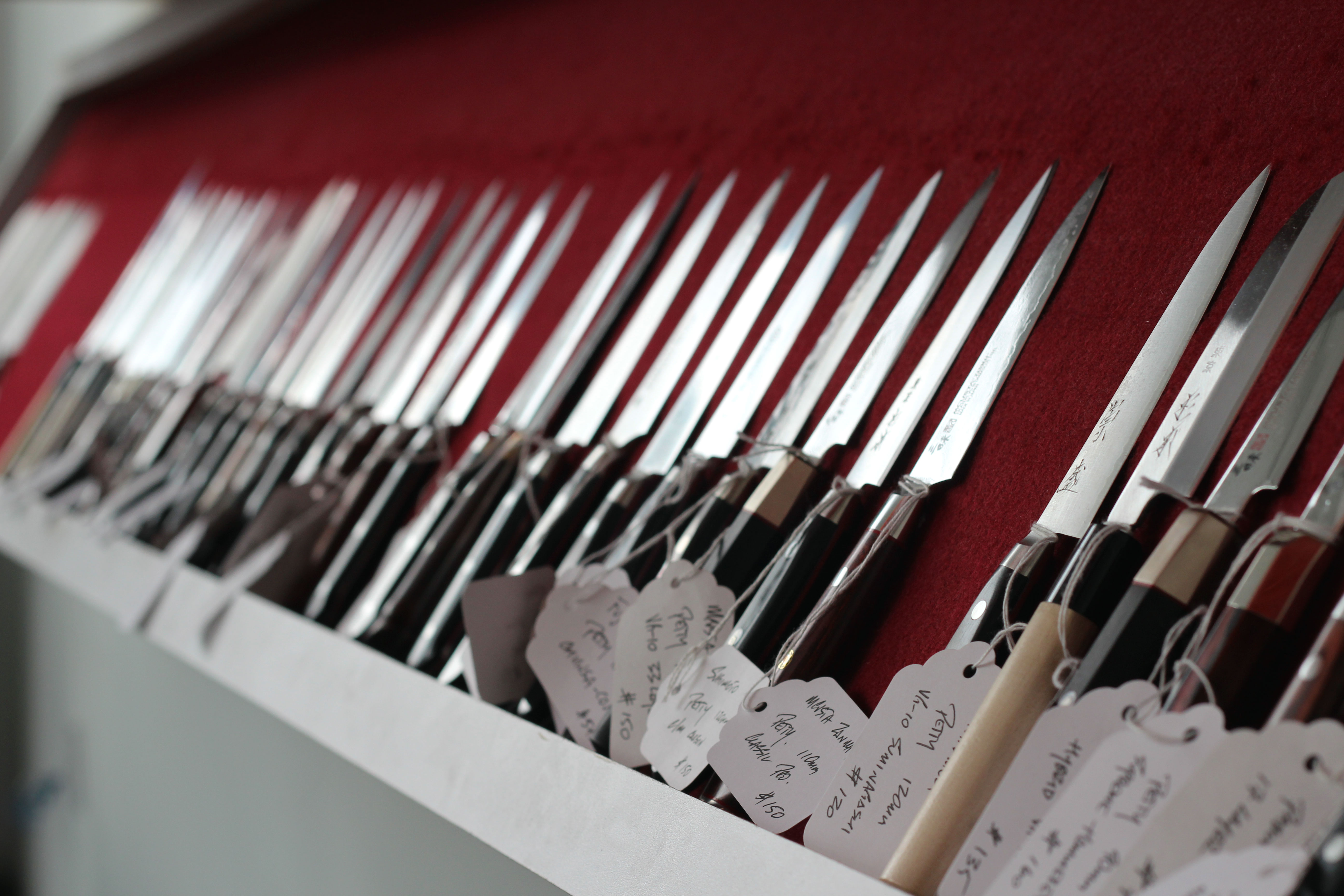 KNIFE has a wide selection of knives, mostly for cooking, available to patrons, though Eugene says you’ll never find one that will cost you over a thousand dollars.

NV: For you, what’s the allure of Japanese knives?

EO: It’s a samurai thing. They’re so sharp, they’re thin as anything, and half of these are handmade so you get that story behind with an old man with a hammer. And I think, frankly, they just look awesome. Especially say that customer there, she chose those brands because she bought one from me two years ago and loved it. These are knives designed to last forever. Once people use it and that’s the biggest part once you use these knives you realize how awesome they are.

NV: Is it just with how they cut or how fine the metal is?

EO: I find with Japanese knives since they use harder metals and the makers forge to get harder steel, the harder the blade essentially the thinner you can make it and just naturally a thinner blade is going to have less friction and less resistance, and very clean cuts and everyone wants that like those infomercials with those tomatoes. They’re horrible. Those Miracle Blade things and any cook worth anything will know they’re horrific. It went dull in like a minute. 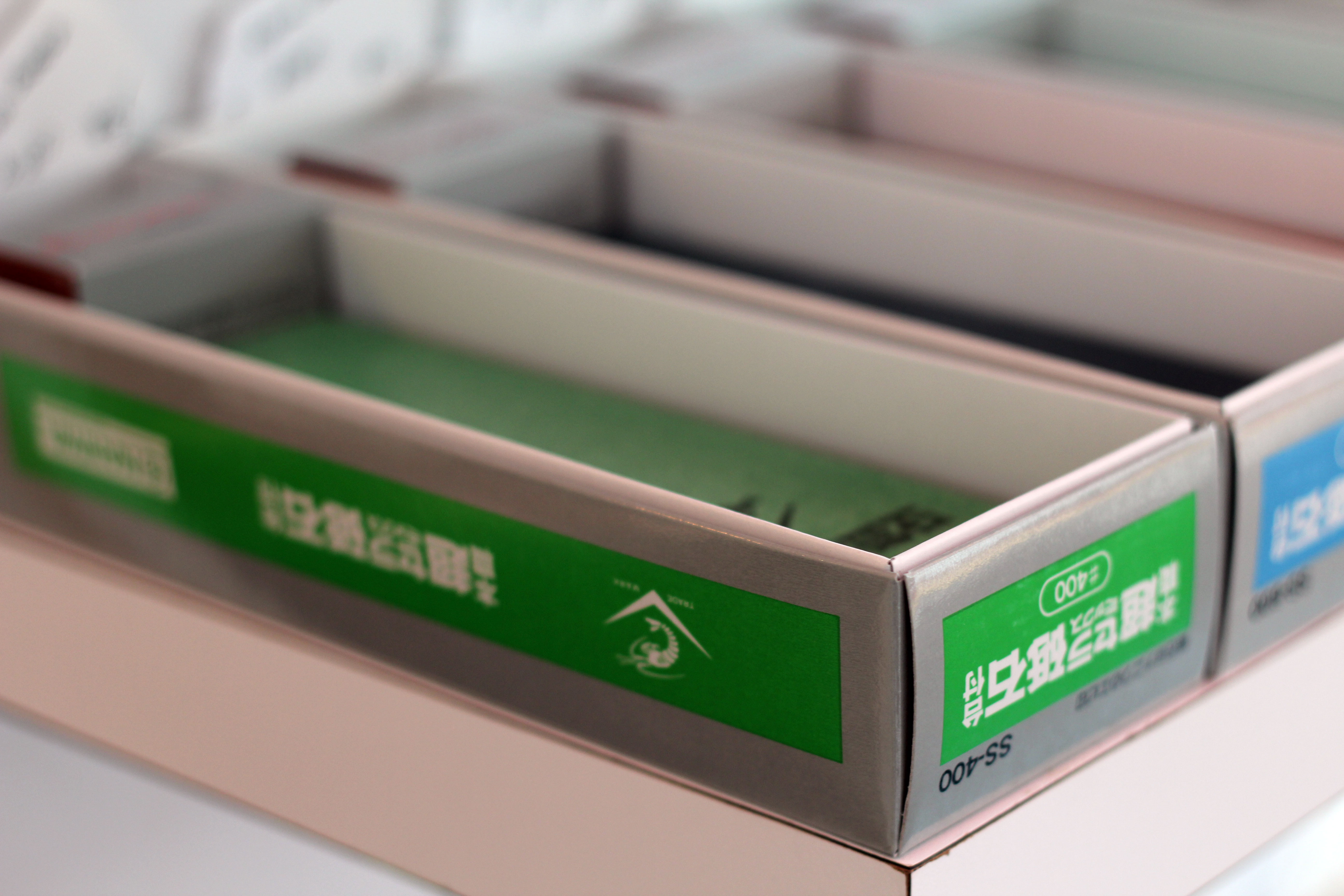 Wet stones are the only real way to keep a knife sharp and they come in all kinds of grains to help keep blades in tip-top shape.

NV: What is the real function of a knife? One part is being able to cut things and on the other hand it’s a physical object of great beauty and simplicity.

EO: That’s an interesting question. There are millions of knife nerds out there of course and if you’re into collecting on the one side you enjoy the handmade-ness. Look at these blades: they’re gorgeous made from a piece of iron into something like that within a week. Beautiful works of art on one side. If you ask me, I believe flat-out that knives are tools. That’s the way I see it personally. Say like a car there are guys who buy a car to get to work everyday, but then there are guys who buy one because they’re just going to polish it everyday and stare at it and joy ride. That’s the way I see it. For me, that’s why you’ll never see a knife in this shop that’s five thousands dollars because it makes no sense. I supply cooks and people who love food over all this stuff. I love my knives, but I don’t care what the knife looks like if my food tastes horrible. I eat out a lot and I eat out at restaurants where people have nice knives, but if it doesn’t taste good.

NV: How has your experience in the restaurant industry informed your knowledge about knives?

EO: Just through experience and having to use so many knives working long, long hours. Say some chef says, hey you have to cut these three-hundred pounds of tomatoes… you better have a sharp knife that will last. But that being said too many cooks and myself included are so broke that you can’t buy the fanciest knife. That’s a big role to play. Your average second-year apprentice doesn’t have five hundred dollars to drop on a knife. I started out with junk for years. One of my favourite knives was a Chinese clever. It was a twelve dollar clever that I used until it disappeared because I sharpened it so much. That’s my beauty knife, but it’s retired now since it’s been so beaten up.

Eugene also holds classes at KNIFE to teach other how to keep knives sharp without whittling down the metal.

NV: How important is maintaining knives?

EO: Super important. That’s one of the reasons why I do classes and why some of them are free. I do demos and I go to George Brown and I go to restaurants because to me it’s hand-in-hand. When you start culinary school and the first thing they teach you is how to cut an onion or how to do basic veg cuts, but I think sharpening is just as important because it’s part of what you do as a chef. You have to and there’s no such knife in the world that doesn’t need sharpening. Everything needs sharpening one day and some more often than others. You’re not going to buy a Ferrari if you don’t know how to drive stick.

NV: You run those classes, how do people react the first time?

EO: The classes I do are more home cooks and foodie types. They sign up, so they’re already super interested into sharpening. It’s usually at the end of it. Nine out of ten times and they start to shave their arm hair or shave a piece of paper they’re like, ‘Holy crap.’ Everybody’s perception of sharp is different as well. Maybe the sharp knife through your isn’t the same way I think of a sharp knife, and so one. Many people will come in and I tell them to bring a dull knife, but once it’s done, polished, and ready to go you get that ‘wow moment’. 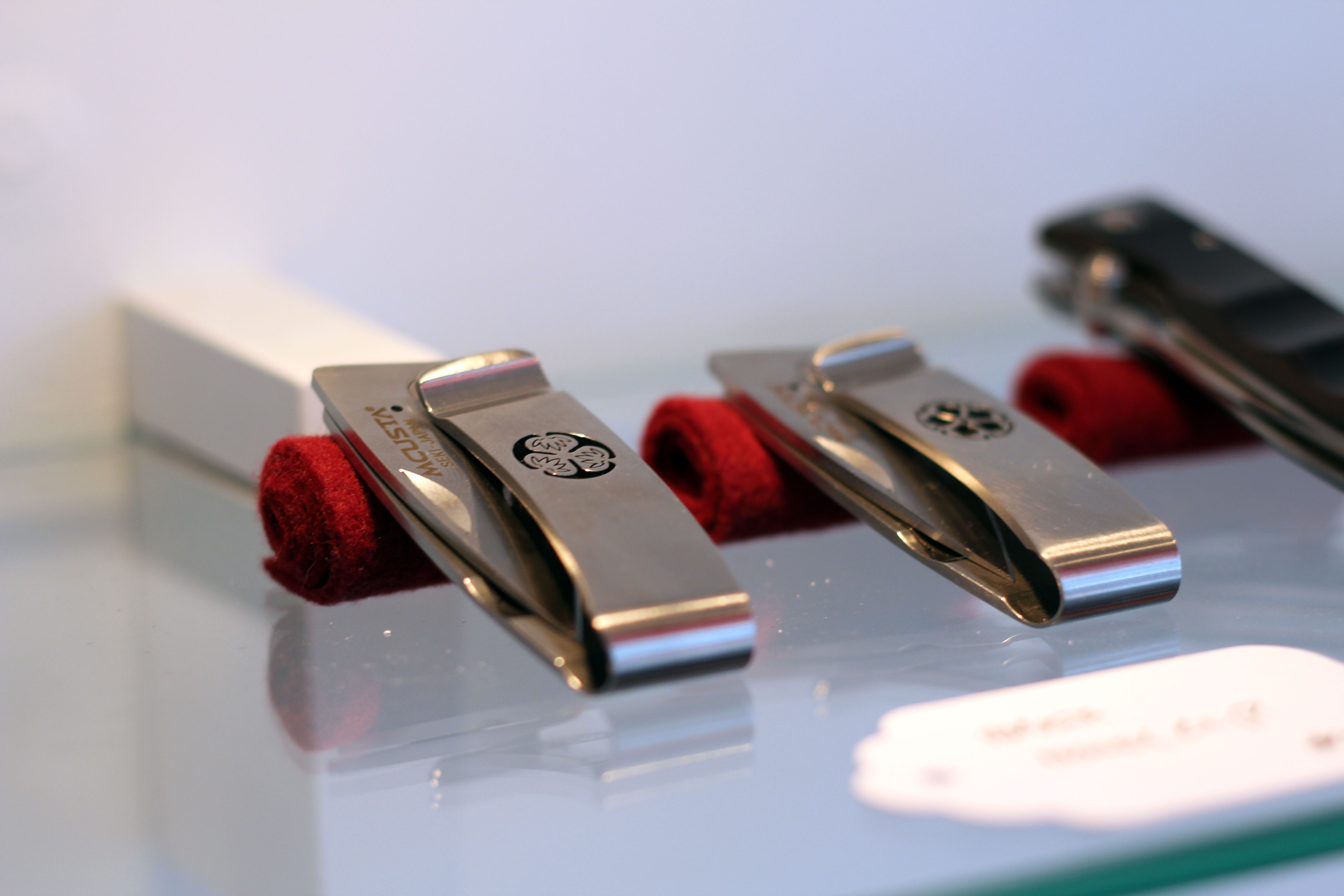 KNIFE also has a selection of Mcusta pocket knives that have made knife nerds go crazy over these well-designed knives.

NV: What is in your mind the perfectly designed knife?

EO: That’s a tough one. The most versatile of knives is the chef knife. The eight inch or whatever you’re comfortable with is always personal. Some guys have huge Shaquille O’Neill hands and they might need a bigger knife. I like a good seven or eight inch Gyuto Chef Knife, but as far as a perfect knife there’s no such thing. Everyone is different and if you ask me personally, I go for the lightest I can find. Very, very light and thin as anything. There’s benefits in having really hard steel or really soft steel, but somewhere in the middle works best. It’s easy to maintain, not super expensive, and I don’t like buying one thousand dollar knives.

NV: I know that you also have a selection of Mcusta knives, which are growing in popularity among younger people. Why do you find people like owning their own little pocket knives?

EO: Knives are just kind of cool. I like those knives solely for the utilitarian purpose and there are guys out there who just collect it, but I like to keep a little money clip. I rarely use it, but I used it yesterday when my wife bought a pair of gloves and she wanted to cut the little price tag. Instead of ripping it with you teeth using something like this are cleaner and you don’t ruin the fabric of the gloves. I have a buddy who is an electrician and he needs something to strip wire, or any utility purpose I think they’re nice. In a world of old men, they’re very modern and they use modern techniques. They push the envelope with the deign of the knife and they just look badass. 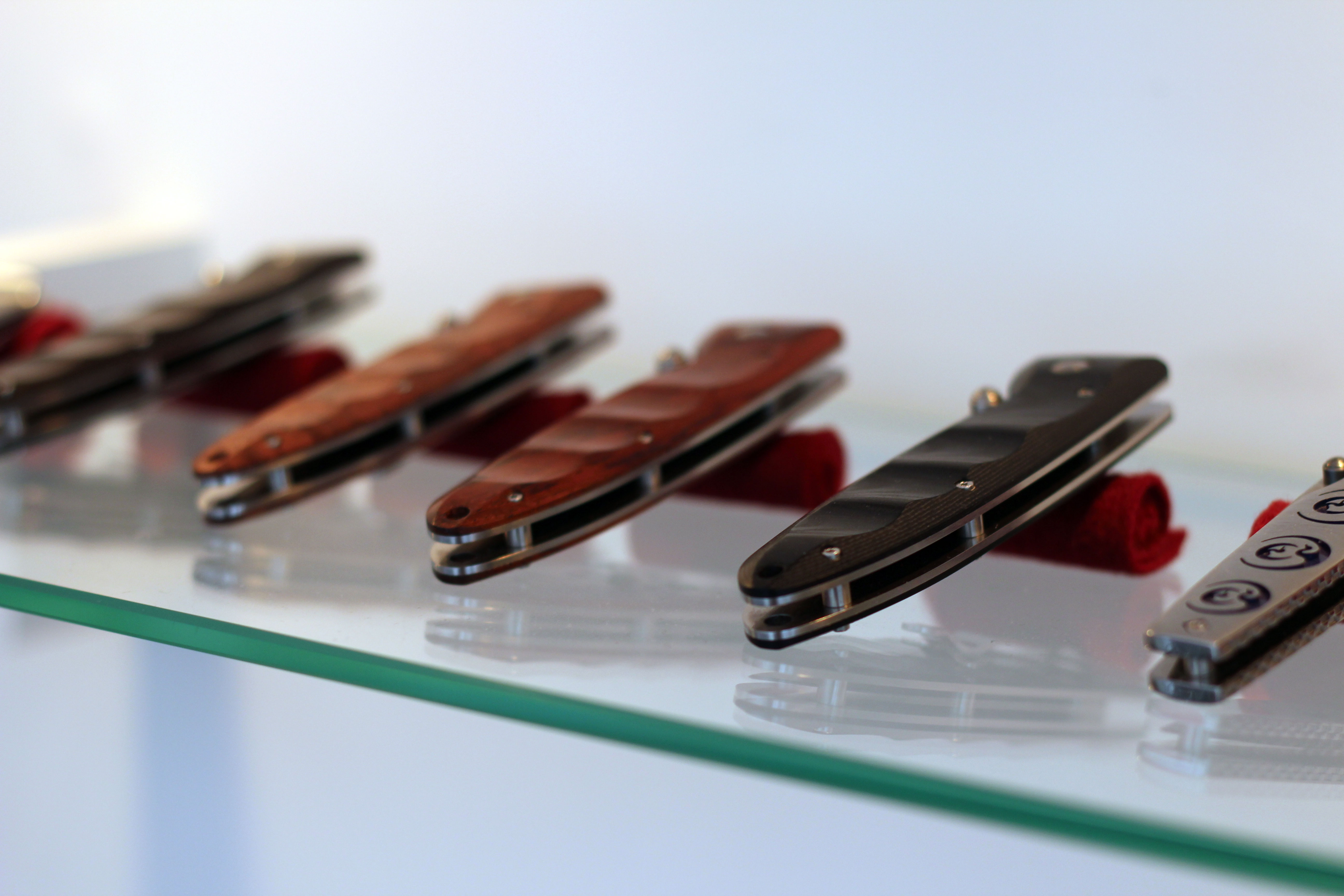 NV: Where do you see KNIFE going in the next few years?

EO: From KNIFE this store itself, there is more awareness now. We’ve only been doing this for four years. I think it’s more just how to maintain knives that’s important to use. People are respecting the need and the importance of a sharp tool in the kitchen. It’s not for everybody and those knives I was doing when you walked in it’s just like dropping the car off at the mechanic. Get it and pick it up the next day, but I’m seeing people out there being more aware of what they like. With the Food Network and celebrity chefs, everybody is hawking some new blade or some brand, and people like it and get into it. I’d like to be an outlet in Toronto and we don’t do online for Toronto chefs, foodies, or whoever to just have a place to put it in your hand. You feel it and get the idea. For the store itself, I’m happy what we’re doing.

KNIFE is located at 249 Crawford St along Dundas Street West in Toronto. It’s open from 11 am to 7 pm, and Eugene hosts sharpening lessons for those who want to learn.