Mark Sakamoto’s ‘Forgiveness: a Gift from My Grandparents’ is an interwoven tale of two family histories 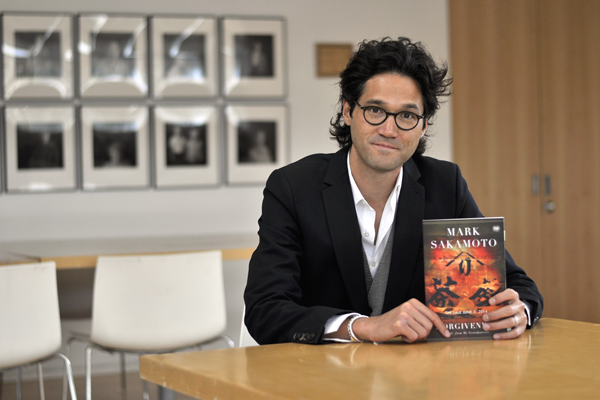 When Ralph MacLean traded his quiet, yet troubled, life on the Magdelene Islands for the ravages of war, he never thought he’d fight from the confines of a prisoner of war camp.

In 1941, he would be transported on a Japanese Hell ship from Hong Kong to Japan where he would live life on the very edge of existence.

On the other side of the world, Mitsue Sakamoto and her family are taken away from their pleasant lives in Vancouver and thrown into camps following the Japanese attack on Pearl Harbor. With their property sold off and burnt they would move from camp to camp living through a Canadian nightmare.

And years later, the two families would collide and would forgive one another for the transgressions of the past. This is where Mark Sakamoto comes into the story.

A lawyer by training and now a novelist, Sakamoto has brought together his family history in a new book Forgiveness: a Gift from My Grandparents. It tells the harrowing tales of each side, but also explores the nature of forgiveness.

As someone who has known tragedy in his own life, the lessons learnt from the stories of his grandparents are something that has changed how he sees the world.

“It’s a two-sided story,” Mark Sakamoto tells Nikkei Voice. “My grandpa McLean who was a POW that was not a summer camp he was on. It was a horrific experience and he lived life on the edge of survival living through starvation and beatings.”

“And I still don’t think I really appreciate what it’s like being ripped from your home just because of your ethnicity, but I do know what feeling loss is,” he says. “Their stories are a roadmap and there are steps you can take that are helpful in finding forgiveness.”

Sakamoto has written pieces for the Globe and Mail, Toronto Star, and Winnipeg Free Press, but this was his first book that encapsulated his experiences.

The biggest challenge he faced was gathering the personal stories from the two sides of his families.

The book started as an essay and was a love letter to his grandparents, but through researching the 30s and the 40s he found himself transported back in time; however, he constantly found himself thinking about the present.

“For me the difficult part was going as deep as I could in the details of that story, which like any story has a lot of sadness and joy as well,” Sakamoto says.

And one of those moments of joy is when the families are finally brought together when Stan Sakamoto, Mark Sakamoto’s father, brought home his would-be wife Diane and her parents.

Through this meeting, the tensions created by war and strife started to fade away.

“It was in the 60s and literally 15 or 16 years after that my mother brought home a man who looked exactly like his perpetrators, his guards and my Grandpa McLean looked a lot like the RCMP officers who shuffled them out of their lives,” he says. “There was forgiveness in their hearts, but if you don’t scrub your own heart clean it’s all for not.”

Many Japanese Canadians know the term Shikata ga nai and what it means in the context of the internment experience. ‘There’s nothing we can do about the past, so let’s move on’ is the general meaning of the term.

And many Canadians know how mum older generations are in passing along knowledge of their wartime experience. In a world bereft of mandatory enlistment and World Wars, younger generations live relatively comfortably compared to their forebears, so why burden them with these memories?

However, while writing the book, Sakamoto found the term began to transform.

“I think I had a difficult relationship with that term and I thought of it before writing this book as defeatist. I thought of it as a bit of a cop out. You can’t change it, so don’t.”

Mark Sakamoto’s new book is available as of June 3. He will also be taking his book on tour and the dates are as follows:

This article was reprinted from Nikkei Voice’s June Edition. Why not Subscribe or donate today?


[…] these very tales of toughness and tenacity that light our paths and often define who we are. Forgiveness sheds light on a shameful chapter in our history, but it also shows us that healing is possible […]


[…] Award for Drama for his play Indian Arm. Currently, Kanagawa is developing the stage adaptation of Mark Sakamoto‘s memoir, Forgiveness: A Gift from My Grandparents, winner of Canada Reads in […]