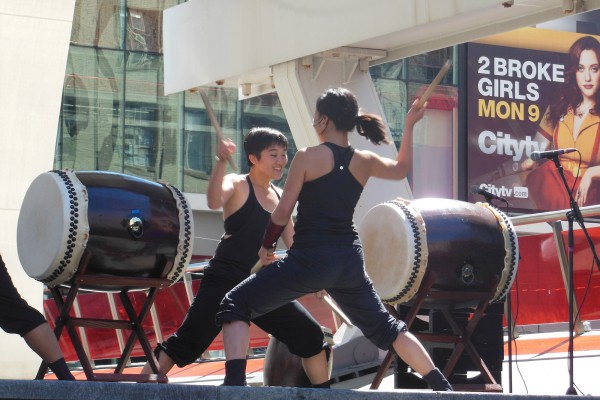 By Miki Nomura and Mizuki Ogi

There were vendors from both the Japanese community and Toronto’s many Japanese restaurants whose carts lined the square, and people wearing Japanese traditional clothes – happi or yukata – created unique atmosphere at Yonge-Dundas Square. Hundreds lined up to get a taste of karaage (fried chicken), yakitori (skewered grilled chicken), or kakigori (shaved ice dessert), which are staple foods of Japanese summer festivals.

At the main stage, performances were held every hour to help make Matsuri unforgettable event. Audience gathered in front of the stage and clapped to the beat of the music played. We are sure that people in attendance had a memorable time.

So be sure to look out for the full story in the September issue of Nikkei Voice, but enjoy our picture gallery until then!