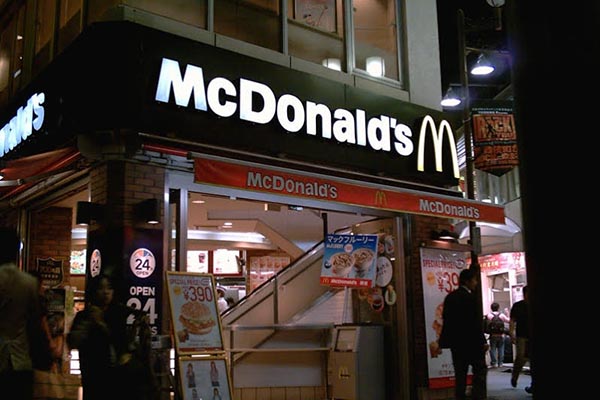 TOKYO – If McDonald’s in North America is treading water with the recent news of its financial problems then McDonald’s Japan is waterlogged.

With several year-on-year losses under their ever-shrinking belt, the fast food giant in Japan is making a bid to get more customers into their locations by offering more inexpensive menu items.

The Hiru Mac deal was priced at ¥350 to ¥550, but was sold only at lunch time. It appealed to customers of all kinds because of the price, but perhaps it was too good of a deal.

The new lunch combo, revealed last week, is priced at ¥500 and will be sold from 10 a.m. onward any day of the week. The three ¥500 combos each featuring a different new hamburger, served with french fries or chicken nuggets and a drink.

Chief executive officer of McDonald’s in Japan, Sarah Casanova said that the new menu items will provide customers with better value, but many have cried foul on the chain removing the cheaper Hiru Mac.

“Customers overwhelmingly told us they wanted a better range of different sized options on the menu to satisfy their hunger but still at an affordable value price,” Casanova said at the menu launch in Tokyo.

McDonald’s Japan is also starting a new campaign that will be taking place between 2 p.m. and 5 p.m. on October 25th.

The new hamburgers being served at the restaurant have been given the nicknames: Eguchi, Babepo, and Hamutasu. If you live in Japan and just so happen to have that as your name you and four friends can get a free burger.

Considering how few people in Japan are likely to have the names Babepo and Hamutasu it’s likely that few free meals will be had that day.

However, customers who do have those names only need to receive a confirmation of their identity through a text message to receive a burger. SMS profiles can be changed, so it’s likely that a few Babepo’s may be showing up at stores on October 25th.

Many speculate that the deal is part of a new effort of the restaurant to engage its customers through their phones.

What hasn’t satisfied the hunger of Japanese consumers are the various controversies McDonald’s Japan has found itself in over the last few years including an expired-meat scandal, shortages of menu items like french fries, and several incidences where foreign objects were found in food items.

It has taken a long time for the fast food restaurant to regain the trust of consumers, but they’re going all out in their efforts to reach out to consumers.