Meet Carlos Sulpizio: a Canadian artist who can’t get enough of Japan 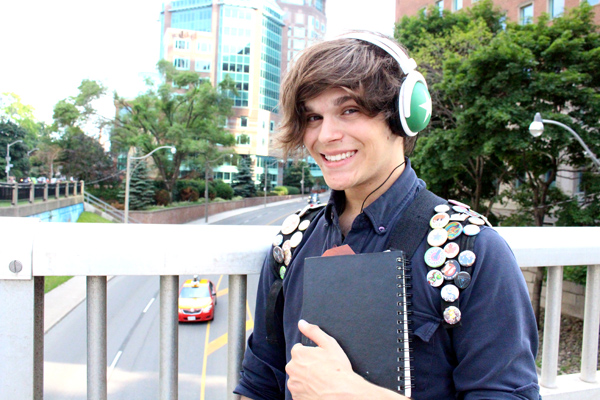 When Carlos Sulpizio, 21, is in Japan, he sticks out.

“You’re in a sea of business men in suits, teenagers and then you see a white kid with a pen drawing. I like being a fish out of water,” he said.

You can tell a lot from the notebook he brings with him. It consists of pictures taken at photo booths with friends in Japan, Air Canada plane tickets, sketches and past works of art he’s made.

It all started at the age of four, when Sulpizio loved playing Super Mario on his Nintendo 64.

“After I used to play, I would draw Mario levels, draw stars,” he said.

The signature backpack he wears and brings with him wherever he goes is covered with buttons, many with Mario characters along with his headphones decorated with stars that like those in the game that, “give him a power up.”

Eventually, as Sulpizio kept on drawing, creating his own detailed Mario levels, he became interested in drawing everything from trees to cars to stars, and as Sulpizio said, “It never really stopped.”

At school, when there was a class art assignment, he was the guy all his friends would ask to do their project.

“It was like I was a drug dealer, but with art,” he said.

As he grew up and went on into high school, for Sulpizio, art was always a passion. But a two week school exchange trip with Oakville’s sister city, Neyagawa, Japan, changed everything.

At the time, he knew he loved art but wasn’t confident he could make a career doing it.

Even though he practiced his Japanese language skills before the trip, the flight attendant spoke too fast for him to understand and when the nervousness kicked in, he thought to himself, “I hope this ends soon.”

But the fear quickly turned into relief when he met Tateki Ueeda and his family, who he was staying with for the exchange.

He said that Ueeda’s family embraced him with open arms and now, “They are my family.”

Even after the exchange took place, he’s stayed in contact with the Ueeda family and he and Tateki are, “Forever bros.”

If he had to describe the trip with one word, it would have to be “magic,” he said.

Learning to “go with the flow” helped him gain confidence, break out of his shell and taught him to stop second-guessing himself not just in his art, but in life.

Despite people who spoke faster than he could understand, the new sea of people around him, the organized chaos of Tokyo and new customs, “I just learned and adapted,” he said as he snapped his fingers, “Like that.”

“I’m not as hesitant now, if a friend asks me to talk to a stranger, why not.”

He now speaks almost fluent Japanese and has been to Japan 10 times since, travelling to Osaka, Tokyo, Hiroshima, Kobe, Matsue, Nagoya and Kyoto.

His trips to Japan have also inspired a unique way of make art.

In Toyko’s Shibuya, he sets up and with his super Nintendo controller holding his canvas, he draws, incorporating the people he meets and sees into his works.

In his illustration, Tokyo Smiling, he incorporated 38 people into his work. He knows each of them by name.

“Everyone has a story, I want to try and tell all of those stories in my art,” he said.

After repeatedly going to Shibuya along with other crowded areas and painting, he’s been interviewed five times on national television about his work and why he’s in Japan. This eventually turned into, “So, Carlos, what are you going to do this time.”

When it comes to all the attention he gets while painting on the street, he said, “I don’t feel like I deserve it, I’m just a guy.”

To afford his trips to Japan, he flies on standby. Meaning he waits at the airport, hopes a last second seat will become available and buys it for dirt-cheap.

“My dad says they call it standby because you’re always left standing at the airport looking at the airplane you wanted to get on, saying bye.”

Even though it’s not convenient and sometimes it takes a few days to find a plane ticket home, he said it’s worth it because it allows him to go to Japan as often as possible.

Sulpizio is graduating from Sheridan’s illustration program in April 2015 and is planning to move to Japan in 2016 for the Japanese Exchange and Teaching program to teach English while pursuing his art career.

He wants to move to Japan and live where he feels most like himself, standing out as beautifully different.

“I can stay at home, be a part-time illustrator while working at Sobey’s, or I can just go for it in Japan.”

“I can’t think of a greater life,” Sulpizio said.