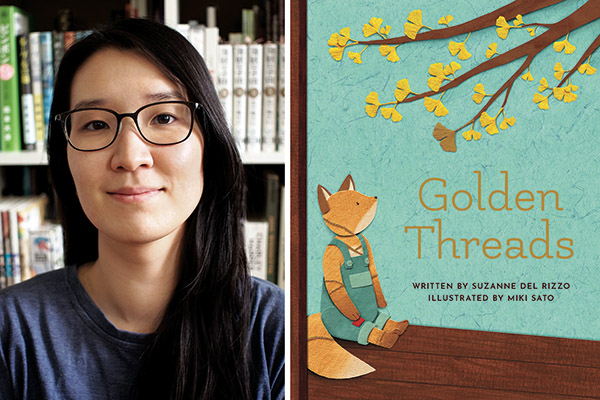 TORONTO — Japanese Canadian illustrator Miki Sato uses a variety of textures and materials to create delicate and whimsical three-dimensional images. Born and raised in Ottawa, she currently resides in Toronto, where she attended the Ontario College of Art and Design to study illustration.

Her first picture book, Golden Threads (Owlkids Books, Spring 2020; for ages 4 to 8) written by Suzanne Del Rizzo, is inspired by the Japanese art form of kintsugi (golden joinery), where broken pottery is repaired with resin painted gold, as well as, the Japanese philosophy of wabi-sabi, the belief that there is beauty in things that may be incomplete or imperfect. Kintsugi values repairing rather than replacing, believing that the cracks give the broken item its story.

Nikkei Voice caught up with Sato to discuss Golden Threads and the technique and inspiration behind her charming illustrations.

Nikkei Voice: When and why did you decide to be an illustrator?

Miki Sato: Since I was young, I knew I wanted to do something in the creative field. I was always drawing and crafting whenever I had the chance, so going into illustration seemed like a natural progression.

NV: Can you explain your technique?

MS: I use a wide range of different papers and fabrics, which are cut and pasted to create a layered illustration. More recently, I’m using embroidery thread in my work and am branching out to new materials. For example, last year was my first time using sand in an illustration.

MS: It’s great playing around with the layers and creating depth with it. It almost becomes like a puzzle with the different pieces and figuring out how it all comes together. Sometimes I think about how much easier it might be to paint or draw the finicky parts of an illustration, but I think working with the limitations of this medium is part of the fun.

MS: Whimsical is pretty fitting! The subject matter is typically the one influencing the materials. I think about how I want parts of the illustration to feel (soft or hard, smooth or rough) and decide on the materials accordingly.

NV: Can you share with us your creative process?

MS: It starts with coming up with the idea and drawing it out. This is actually where I spend a lot of my time, hemming and hawing with concepts and compositions. Figuring out which texture to use happens here too, and I try to make sure there’s a wide variety of it throughout the illustration.

Once it’s all decided, things go relatively quickly. I trace out all the parts and prepare the paper and fabric to be cut. When everything is glued down, it’s scanned into the computer to be colour corrected. Sometimes I like to digitally add a little extra flair to achieve a look that can’t be done physically.

NV: What is it like to collaborate with writers? Was there a big difference working with Deborah Kerbel and Suzanne Del Rizzo? How did working with each of them come about?

MS: Both times, I was approached by the publisher with a finished manuscript and asked if I was interested. I had only done editorial illustrations for magazines until then, so it was an exciting surprise. There was a bit of nervousness from me when working on Golden Threads because it was my first picture book, but I’ve gotten a better grasp at illustrating stories over time.

Golden Threads with Suzanne has a cast of characters and a continuous story, while the Weather Days collection with Deborah is more focused on illustrating scenes that are distinct from one another with an overarching weather theme in each book. Both types of books have their own challenges, but they’re equally a joy to work on!

NV: What inspired the storyline for Golden Threads?

MS: Golden Threads was all written by Suzanne with the editorial guidance from Owlkids Books. I didn’t have any direct influence on the story itself, but I did connect with the message in the book about finding beauty in imperfection. I also added little touches of Japan from my experiences of visiting my grandparents in the Japanese countryside.

NV: What children’s illustrators do you like and why?

MS: I love seeing illustrators who take the layered illustration style another step further and make diorama scenes that are photographed. It’s very inspiring to see how they can create such an atmospheric mood by playing with the lighting and depth of field. Some of my favourites who work in this style are Elly MacKay and Kelly Pousette.

NV: How has being Japanese Canadian impacted/influenced your work?

MS: There is definitely an influence on my work by being Japanese Canadian. Growing up, I consumed a lot of Japanese media in the form of anime and manga—maybe even more than English content. Studio Ghibli films especially are one of my major influences. It might also be where the touch of the previously mentioned whimsy comes from.

There was a time where I tried to avoid leaning too heavily into my Japanese influences, but over time I’ve come to accept that this is part of who I am. But because of that, I’d like to think that my work now has a mix of both Japanese and Western influences. 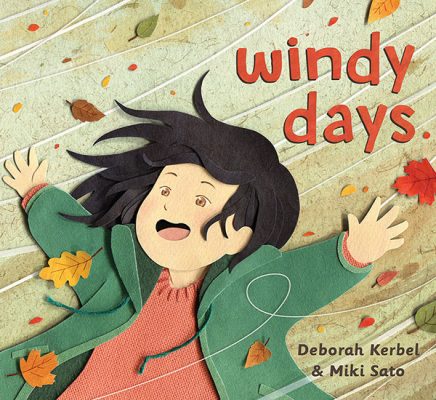 The cover of Windy Days, by Deborah Kerbel and illustrated by Miki Sato coming out in Fall of 2021.

NV: What are you working on now?

MS: I just recently wrapped up work on Windy Days, which is the next instalment in the Weather Days collection from Pajama Press and is set to release this fall 2021. Like the rest of the series, it’s written in playful couplets by Deborah Kerbel and is full of scenes of children experiencing all the different kinds of wind: from flying a kite to almost being blown away!

NV: What would you like to work on in the future?

MS: I would love to keep working on picture books, both in collaboration with other writers and maybe eventually writing my own. I’d like to focus on creating illustrations with more intricate layers, along with doing backgrounds that are out of my usual comfort zone. I’m happy as long as I can keep creating!

To learn more about Miki Sato and to see her work, visit www.mikisatoillustration.com.