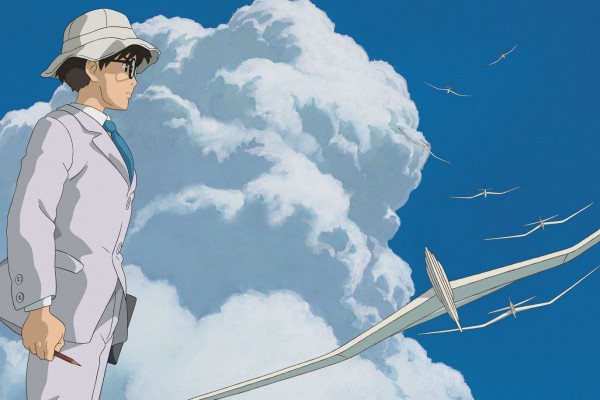 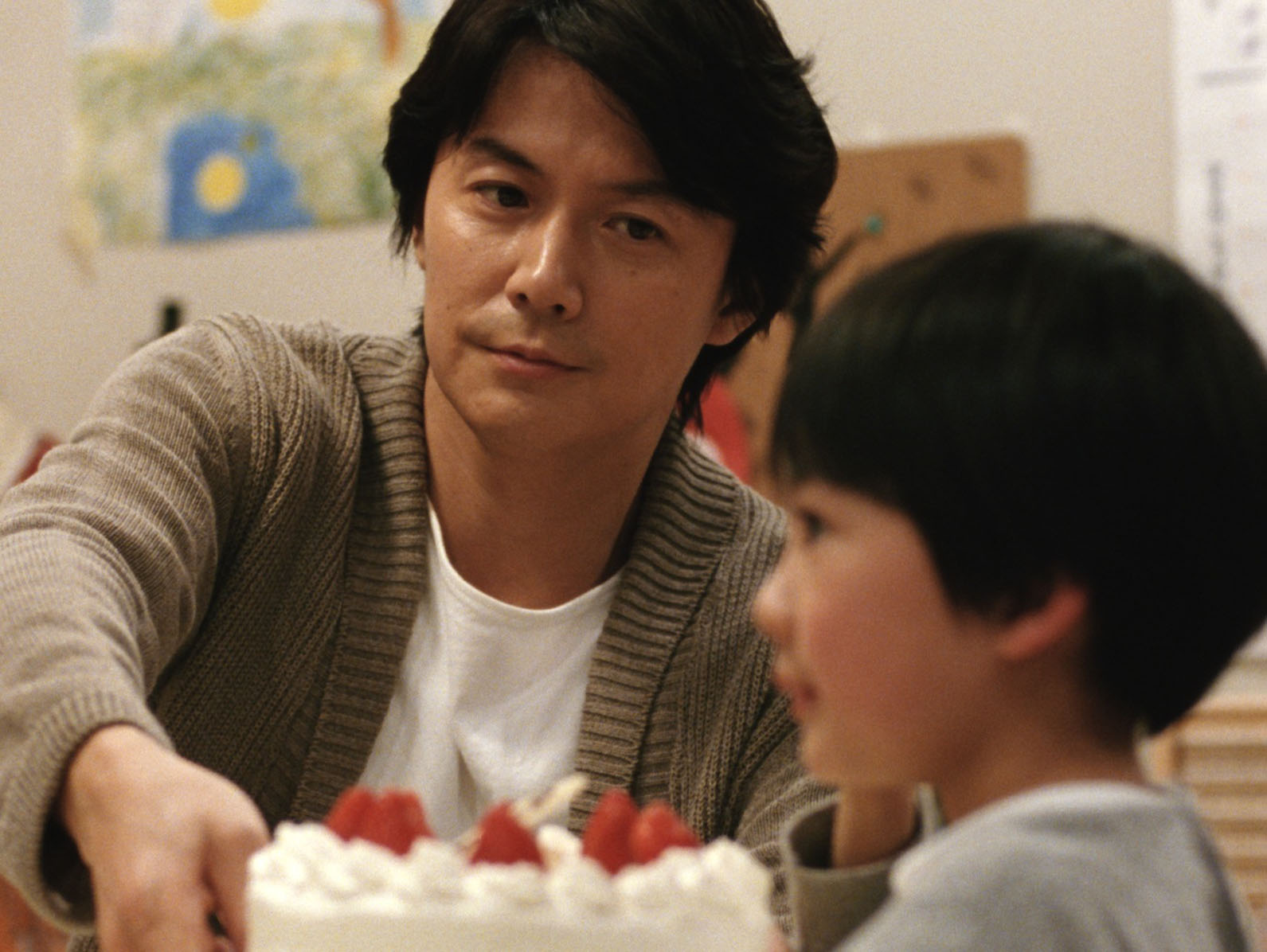 TIFF is of a stature that allows its organizers to attract the biggest and most anticipated films from Japan’s top film makers and 2013 is no exception. Here are our thoughts on the highlights of this year’s Japanese line-up.

Like master director Yasujiro Ozu, to whom he has often been compared, Hirokazu, Still Walking, After Life Kore-eda’s finest films explore the theme of family.

In films such as I Wish and Nobody Knows he has demonstrated an uncanny ability to coax charming, unaffected performances from children. Unlike many of his previous films, Like Father Like Son shifts the focus from the children to the parents; a move that reflects Kore-eda’s own life experience as the busy father of a young daughter.

To achieve this he takes a plot device which might otherwise lend itself to farce: the discovery by two families — one rich, one poor —that their sons were switched at birth, and makes it into something exceptional, at once light as a feather  and weighted with emotional and sociological resonance. 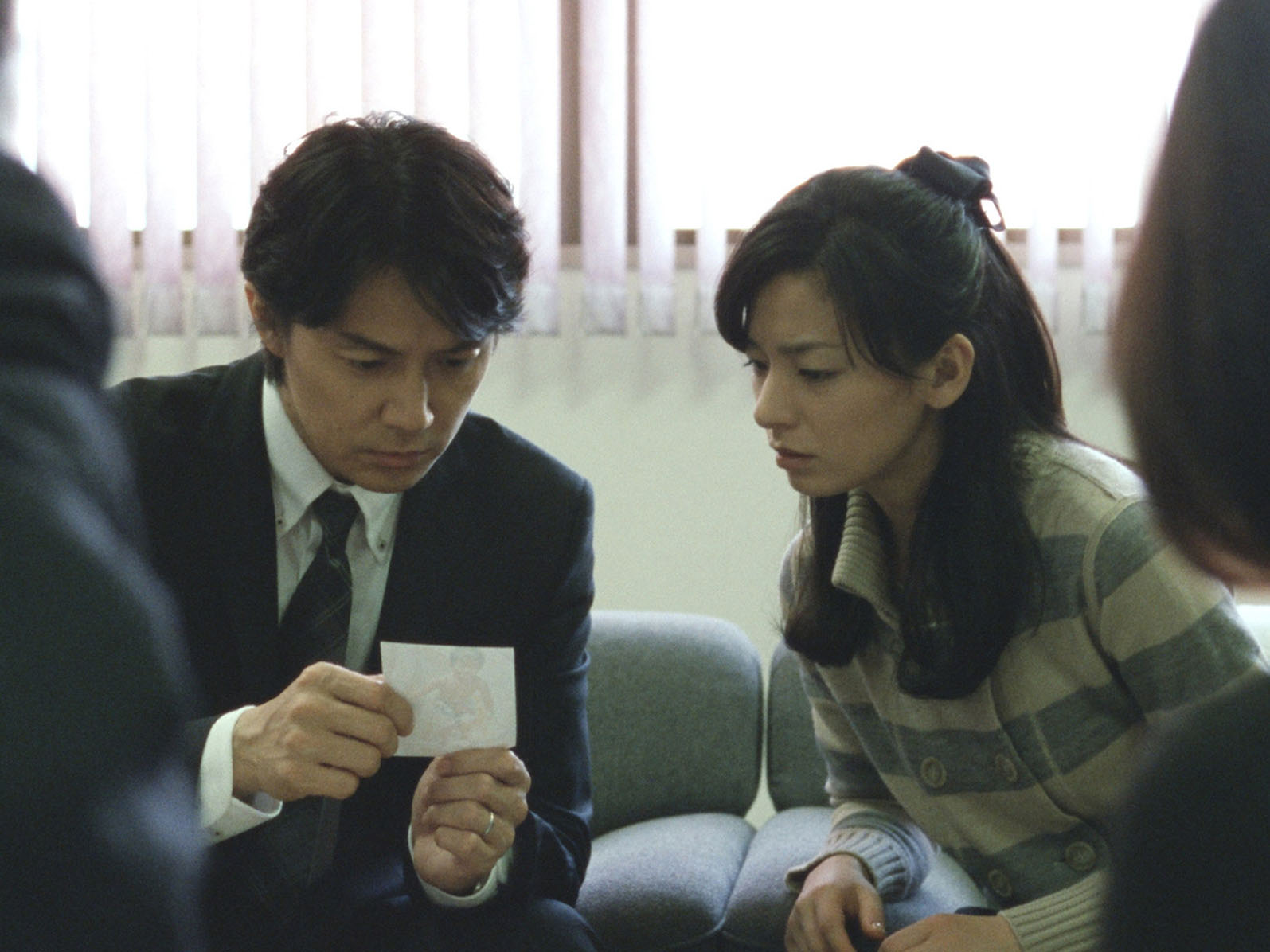 The Nonomiyas are a comfortable professional couple living in a well-appointed but sterile Tokyo high-rise:  Ryota (Masaharu Fukuyama) is an ambitious architect; Midori (Machiko Ono)is a devoted stay-at-home mother who carefully monitors their son Keita’s academic and cultural education. During the Keita’s rigorous application process to an exclusive private school, a phone call arrives from the provincial hospital where he was born: Keita is not their biological son. The Nonomiyas’ world is turned upside down and to it is introduced a new cast of characters: the amiable underachiever Yudai Saiki and wife Yukari (Lily Franky and Yoko Maki). The Saikis, son Ryusei and his siblings lead an easygoing life in a small apartment above Yudai’s less-than-thriving appliance shop.

Ryota is initially appalled that a son of his could be raised in such a course, proletarian environment  and at one point considers gaining custody of his real son Ryusei without giving up Keita, whom he has so carefully raised. There is one undeniable complication however: the Saiki’s is clearly a very happy home and their children literally squeal with joy as they roughhouse with their dad.  Dismay gives way to a faltering acceptance and both couples, at first hesitant to force an abrupt environmental and emotional change on their families; agree to weekend, then more significant exchanges.

Like Father, Like Son received a Jury Prize and was a favourite at this year’s Cannes Film Festival and it is the strongest film in TIFF’s Japanese line-up. It asks questions about the fundamental meaning of parenthood and the bond between parent and child: is the bond one of blood or something that develops through shared time and experience? Typically, Kore-eda provides no easy answer.

The film belongs to Fukuyama who is pitch perfect as Ryota, the main but certainly least sympathetic character: an arrogant, disconnected father who projects his own unattainable expectations on his son and who initially betrays a certain relief when we learns there may be another boy out there that is his. The other leads offer fine support, especially Ono as his isolated, devastated wife. The Saikis too could have been played as a simple counterpoint to challenge Ryota’s values but Franky and Maki bring great warmth and an understated irony to their characters. It is a great ensemble cast and the constantly shifting tone of their interplay is one of the joys of the film.

As usual, Kore-eda works wonders with the children, seeming to set them free within the scene to behave naturally while gently guiding and documenting the results. Through the artful assembly of subtle, tenderly-wrought detail and progression of small revelations Kore-eda stealthily builds to an emotional impact that is overwhelming. The audience I watched the film with clearly loved it, offering voluble and tear-streaked approval over the closing credits. We are happy to report it has already received a Canadian distribution deal so you won’t have to be a lucky festival ticket holder to enjoy this lovely film.

Why Don’t You Play in Hell

I had the opportunity to speak, over drinks, with Sion Sono, the maverick Japanese filmmaker of such past TIFF favorites as Cold Fish and Himizu following last year’s premiere of his masterful Land of Hope.

When asked if that very personal chronicle of the emotional and environment fallout of the 3.11 Tohoku disaster represented a new, more serious direction for him, he laughed mischievously: “No, next time I am going to make a crazy, violent yakuza movie. Something like Kill Bill but made by yakuza! It will be soaked in blood!” Why Don’t You Play in Hell is that film and Mr. Sono has delivered on his promise, and then some. 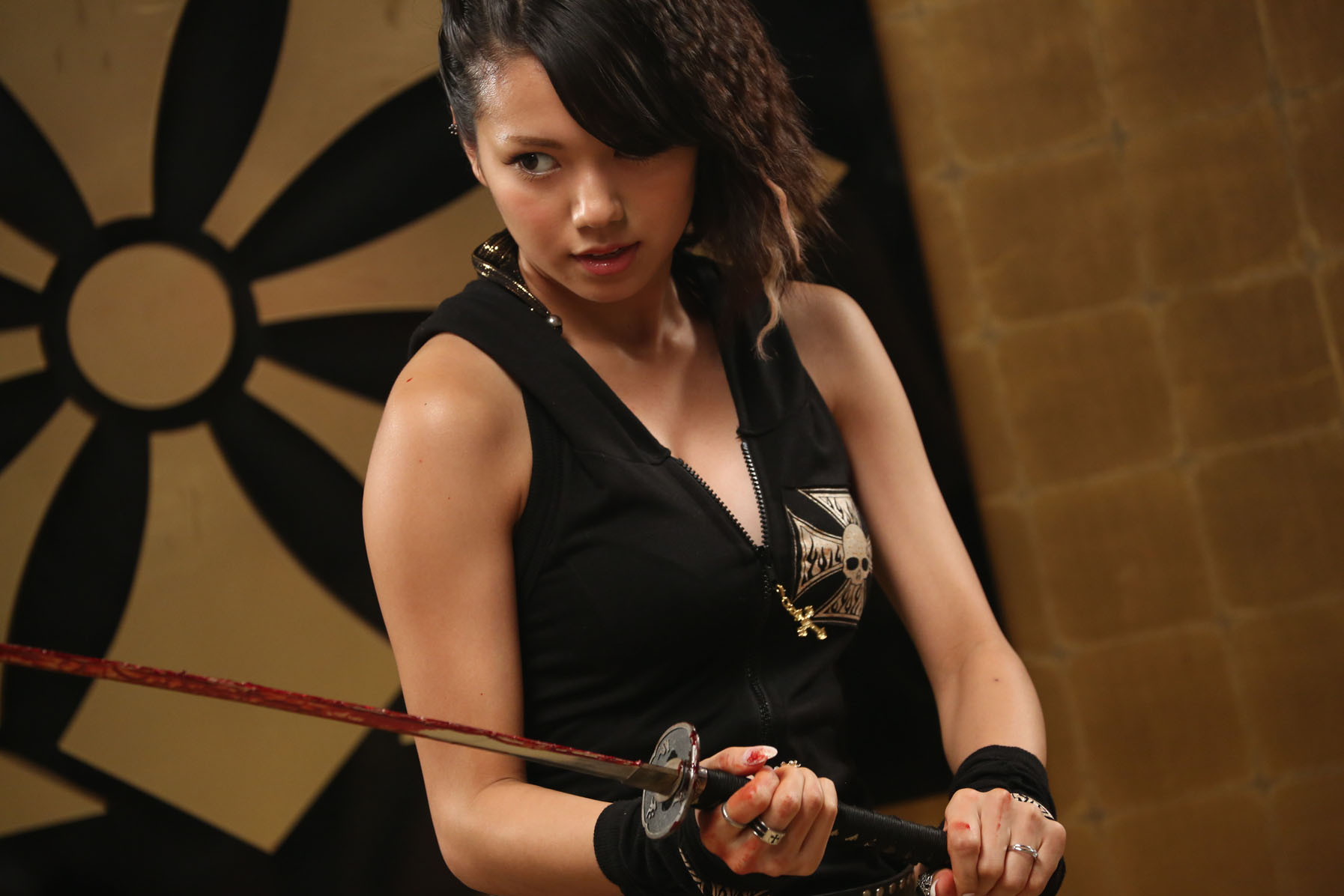 Why Don’t You Play in Hell [Photo Courtesy: TIFF TORONTO]

Originally famous for his perverse, outrageous – and very good – cult offerings like Suicide Circle and Love Exposure, Sono’s recent work has demonstrated a growing maturity and depth as a writer and a filmmaker. With WDYPIH he throws all that out the window and goes back the kind of filmmaking that earned him his cult status. I am not sure that is a positive step forward but Sono is certainly having a lot of fun, and so is his audience.

Two rival yakuza gangs go to war with a rag-tag film crew in tow in an attempt to make a movie star of one of the boss’s daughters (her previous experience being  in a 10 year-old toothpaste commercial); all  of this to appease the boss’s murderous but beloved wife who is only days for being released from prison. Does any of this make sense? I am not sure. Does it matter? Not really, because this is old-school Sono at his most propulsive, unhinged best.

Gone is the emotionally resonant characterization of his recent output; in its place we have wildly charismatic turns by Jun Kunimura and Shinichi Tsutsumi as the bosses and Fumi Nikaido has the lethal daughter. A surreal, deliriously hyper-violent comedy and a heart-felt tribute to Sono’s own on-the-fly renegade filmmaking past, WDYPIH  was the deserving recipient of TIFF’s People’s Choice Midnight Madness Award.

Having said that we hope this slightly self-indulgent detour will not derail Sono’s otherwise impressive maturation as a serious filmmaker. He is too good to spend his career directing arterial spray at his audiences. In the meantime though, sit back and enjoy the decapitations, stabbings, dismemberment; and did we mention murder by French kissing with a mouthful of broken glass?

Oh, and good luck getting that toothpaste jingle out of your head when it’s all over.

Just prior to the TIFF premiere of The Wind Rises, Hayao Miyazaki, the internationally acclaimed and undisputed king of Japanese animation, announced that this would be his final film.

Visually rich, elegant and elegiac in tone, TWR is a fitting film on which to close his career but also a striking departure from earlier work like the much celebrated Totoro or Spirited Away. It is a decidedly adult affair tracing the life of Jiro Horikoshi, visionary designer of the famed Mitsubishi Zero fighter plane; and Tatsuo Hori, author of the novel bearing the film’s title, drawn from a lyric by Paul Valéry:  “the wind is rising, we must attempt to live.” 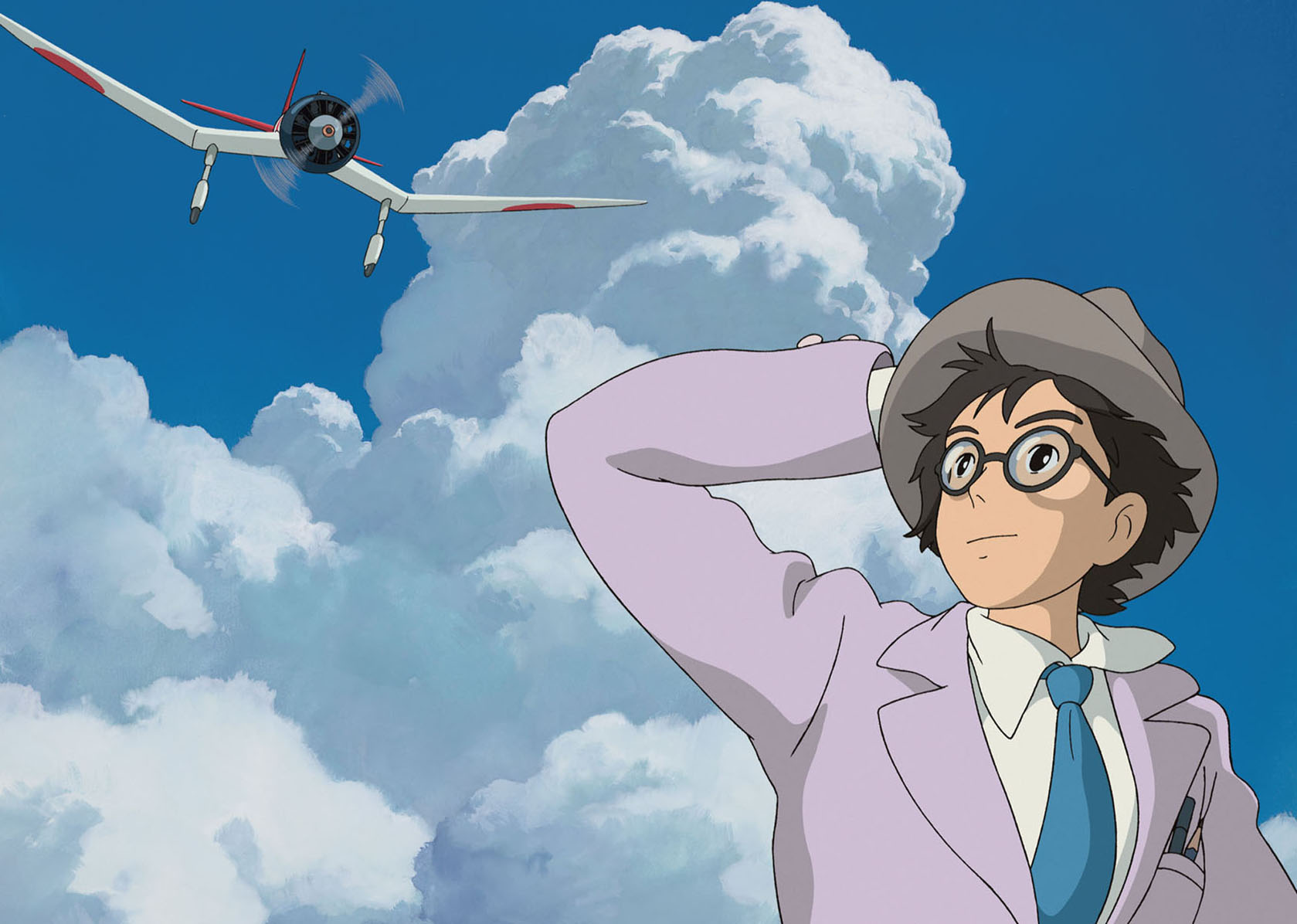 Miyazaki’s Jiro grows up in simple, rural idle. In sleep he finds himself in a fantastical shared dream with Caproni, an Italian aeronautical engineer who designs huge, elaborate flying machines upon which the two skim the surfaces of Italian lakes. With Caproni’s encouragement, Jiro excels in his studies and is accepted into a top Tokyo university. His intelligence and dedication lead him to become an elite engineer of aircraft as Japan and Germany work to rearm their militaries.

For Western audiences it is an odd experience to find ourselves rooting for the successful development of what would become one of imperial Japan’s most effectively deadly killing machines of the Pacific War. But Miyazaki sets the moral component of these issues aside; TWR is a about the pure liberating power of the imagination, self-sacrifice and the nature of genius. When Jiro poses the question of either such planes should be built, even though they are cursed, doomed to weaponization, Caproni counters with: “is the world better with the pyramids or without?” Their role as engineers is one of pure innovation and creation.

TWR is firmly rooted in the harsh realities of Japan between the wars: poverty, growing militarism, the Kanto earthquake, the tuberculosis epidemic. In fact, it is these last two that neatly parenthesize the tender love story with his fragile painter wife, Naoko.

Miyazaki has stated in interviews that this is his favourite film and that earlier acknowledged masterpieces were less satisfying to him as acts of creation. TWR engages the heart and mind while dazzling the eye with Miyazaki’s usual visual fluency. One trick that may be lost on Western audiences is the manner in which he uses visual markers in a manner not unlike how haiku poets use the kigo  (seasonal word) – tiny details that elicit teeming cultural associations and open up great depths of memory and emotion.

Audiences will enjoy TWR best if they are able to align their expectations to a new kind of Miyazaki film. Parents with children expecting another Ponyo may find the kids getting a bit restless as Jiro works out another engineering problem in his drab smoky office. 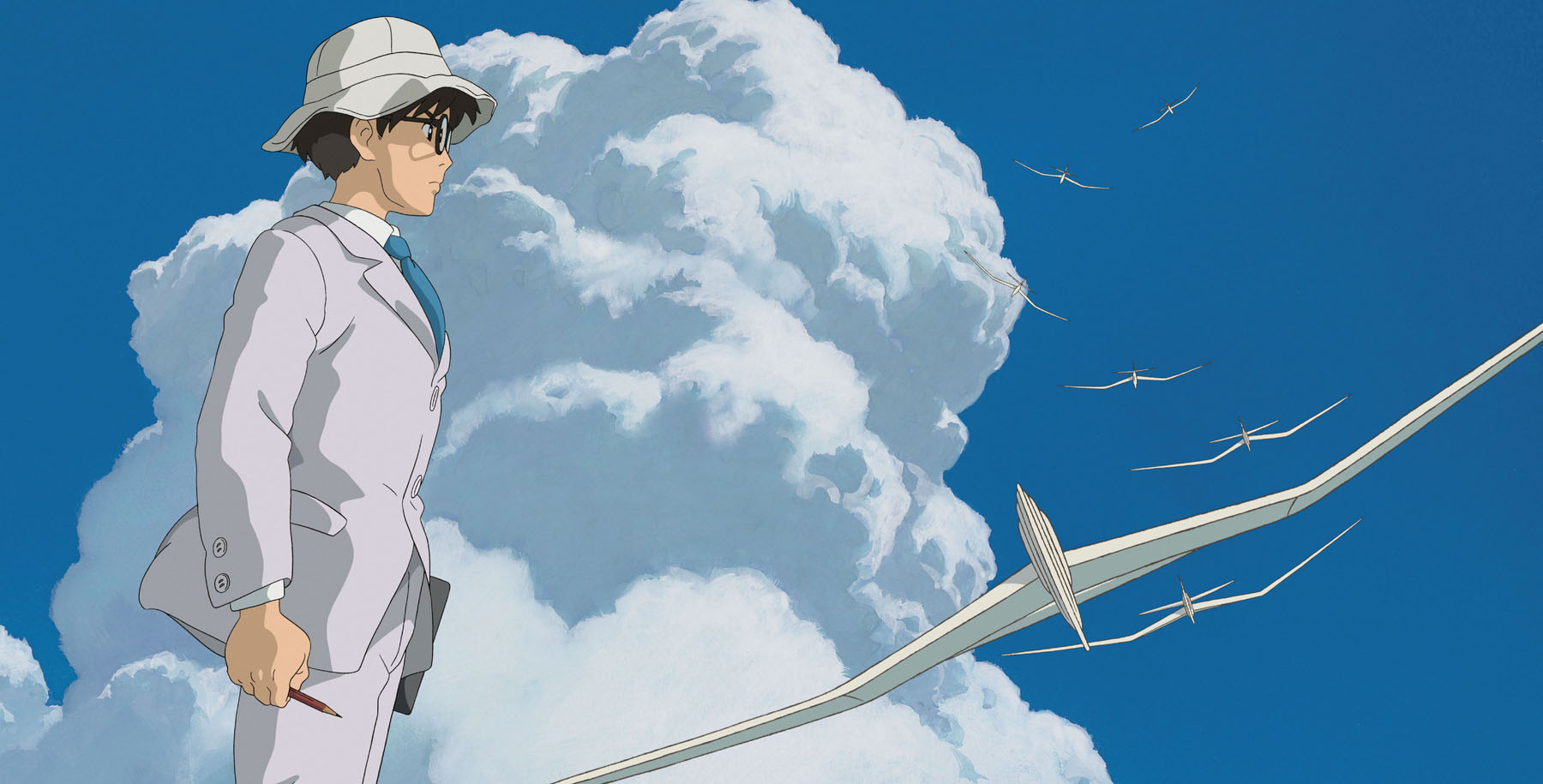 In a final scene Caproni tells Jiro that he has decided to retire from aeronautics and that the engineer, and the artist; probably have only ten years of potent creativity – words that obviously reflect the director own sentiments. But Miyazaki has given the world so much more than a mere ten years; as a visionary animator he leaves a rich canon of work including films acknowledged as some of the finest animation ever made. We thank him for all of that and for leaving the soaring achievement that is The Wind Rises as the final piece of his film legacy.