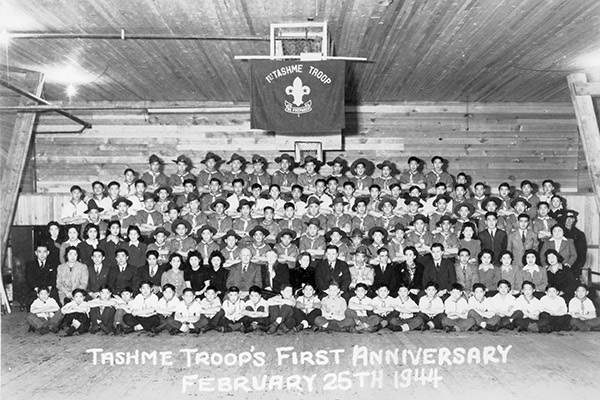 This image shows a group portrait taken inside of a large building of boys in scout uniforms with their arms crossed. There are also men and women in dress clothes. Behind them is a banner that reads, “1st Tashme Troop. Be Prepared”. On the front it reads, “Tashme Troop’s First Anniversary. February 25th 1944”.

How did the children and youth of Tashme spend their recreational hours? One way was through the scouting program started by Shige Yoshida.

Aptly named, the “Tashme Troops” this program came about as Mr. Yoshida’s way of introducing scouting to the community, but it quickly became a way of providing children with constructive and enriching activities, while also fostering a strong sense of community among the Tashme youth. The Tashme Troops was a quick success among the parents, who saw this as a great opportunity to keep kids occupied, especially when school was out.

The Tashme Troops were composed of two factions: the Boys Scouts, and the Girls Guides. The two troops were then split into smaller “patrols” that comprised of 8 members, and one team leader. Each patrol was given an animal name, such as Beaver Patrol or Owl Patrol. Once a week the kids would gather at Tashme’s “Building D” at one o’clock for their scout meetings where they would learn various scouting activities such as first aid, tying knots, and communicating in codes.

The patrols would also compete with each other in games such as tying the best knots, or communicating a coded message as accurately as possible from one end of a line to another. Patrols also received points based on the attendance and punctuality of their scout members. The best patrols would be given the “Honour Patrol Pennant.” In the summer, the Tashme Troops organized hikes, camping trips, and various competitions. They also participate in parades, and hosted many other recreational and entertainment programs.

The Tashme Troops played a vital role in the everyday lives of children in Tashme. Amid the difficult and unjust circumstances that the Japanese Canadian community faced in Tashme, it was all the more important to enrich the lives of these children and youth, many of whom according to Mr. Yoshida, “had nothing else to do.” The Tashme Troops were officially formed in February of 1943.

Title: “A group portrait of the Tashme Troop; Tashme, B.C.”