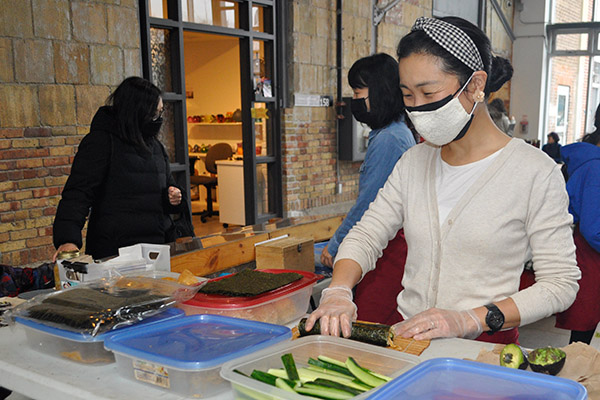 
For 12 years, Chihiro Maezawa has brought healthy Japanese treats to Toronto farmers’ markets with Natural Japaneats. Above is Maezawa at the Artscape Wychwood Barns farmers’ market. Photos by: Kelly Fleck.

TORONTO — On a Saturday morning at the bustling farmers’ market at Artscape Wychwood Barns, alongside vendors selling fresh fruits, vegetables, meats, and baked goods, is Natural Japaneats, selling some of the best daifuku mochi in the city. Soft, pillowy mochi with anko and fillings made from fresh seasonal ingredients like berries, fruits, or nuts. Alongside the mochi is freshly-made brown rice onigiri and sushi.

Behind Natural Japaneats is Chihiro Maezawa, whose passion for healthy vegan treats comes from her sincere love and respect for nature. She has been bringing authentic and healthy plant-based Japanese treats to farmers’ markets in the GTA since 2010. The secret behind Natural Japaneats’ soft mochi is that Maezawa makes it fresh that morning. On Saturdays, Maezawa starts making mochi at one in the morning, leaving her home in Uxbridge by six to open her farmers’ market stand by eight in Toronto.

“It is tough, but it is only once a week, so I can handle it,” Maezawa tells Nikkei Voice in an interview.

Currently, Maezawa can be found at The Stop’s farmers’ market at Artscape Wychwood Barns and she will be at the Evergreen Brick Works farmers’ market from May to December. Pre-pandemic, Natural Japaneats’ stand was always at festivals and events at the Japanese Canadian Cultural Centre. Maezawa’s mochi was also part of the centre’s recent Keep The Lantern Lit fundraiser gift bag. 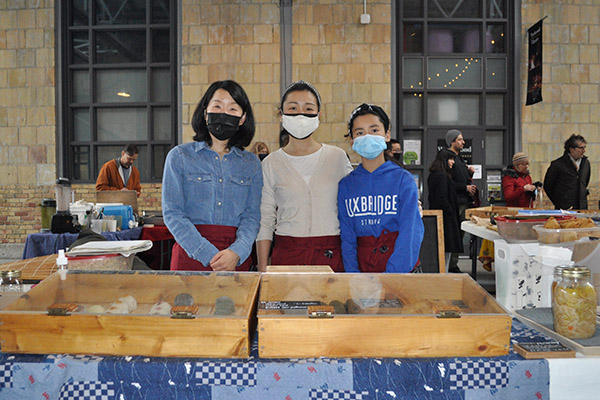 During the week, Maezawa makes the anko, or sweet red bean paste, and the different fillings to prepare for the mochi wrapping on Saturday morning. In the summer, when the farmers’ markets are the busiest, Maezawa can make up to 700 mochi in one morning, sometimes enlisting the help of her parents when they visit from Japan or her friends.

Maezawa first taught herself to make mochi by watching videos online. On her children’s playdates with a group of Japanese mothers, they would often bring snacks to share. Maezawa found the mothers were missing mochi, and she wanted to learn how to make it to share with the group.

“They were all Japanese moms, and what we all missed was mochi. So I often made mochi. Everybody liked it, and I loved [making it].”

At that point, Maezawa was already selling brown rice sushi at the farmers’ market every other week and started offering mochi, selling 20 or 30 pieces. Over the years, Maezawa has seen mochi become more popular with her customers. Some of Maezawa’s regular customers are Japanese Canadians who feel connected to their culture through the authentic mochi. Maezawa has built a community of regular customers at the farmers’ markets and festivals. Throughout the pandemic, she stayed in contact with her customers by launching a newsletter.

“I see the same faces every week. So it was really nice to connect with them through email too. To hear how they are doing, how their kids are doing, we want to make sure they are okay. There are many elders too, so I was really worried about them,” says Maezawa.

Maezawa decided she wanted to take formal lessons on making mochi and travelled to Japan to learn. Maezawa’s healthy cooking methods stem from her interest in macrobiotics, a lifestyle that stresses balance and harmony drawn from Zen Buddhism. The diet emphasizes whole grains, local vegetables, seasonal fruits, beans, and some white fish; and cuts out meat, dairy, and most animal products. Inspired by the macrobiotic philosophy, Natural Japaneats uses vegan, seasonal, and local ingredients.

From season to season, the daifuku mochi fillings change according to the local ingredients available, says Maezawa. In the winter, Maezawa uses flavours like ginger, kumquat, and tangerines. In the springtime, sakura, raspberry, and mugwort. In the summertime, Maezawa picks organic strawberries from a farm in Uxbridge and blueberries from a farm in the Niagara area. 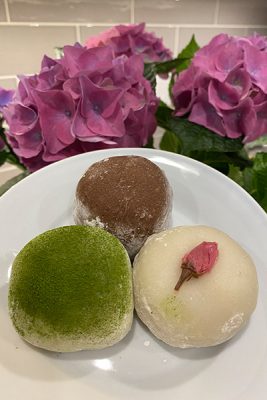 Natural Japaneats’ daifuku mochi. The three flavours featured on the plate are matcha, sakura, and chocolate.

“One of the big reasons we moved to Uxbridge was we wanted to grow our vegetables and fruits,” says Maezawa. “Fruit mochi is only available in the summer. Sometimes I freeze fruit for winter, but I don’t really want to. I want to [showcase] seasonal ingredients, and you have to get them in summer.”

Not a local ingredient, but still very special to Maezawa, is the pickled sakura and umeboshi her parents make in Japan for her to use. Maezawa is always looking for ways to expand and grow and experiment. She is excited to explore making savoury mochi mixed with different vegetables, like kale, tomatoes, or beets, from her fellow vendors at the farmers’ market. She wants to make colourful mochi that customers can take home, cook in the oven and enjoy wrapped in nori and dipped in shoyu. Maezawa is also experimenting with pickling Ontario apricots to use like umeboshi for mochi and onigiri.

Maezawa enjoys experimenting with the different flavours and local ingredients available in Canada, like caramel and pecan mochi inspired by sweet butter tarts or rhubarb grown in her garden. Customers can find Maezawa’s different creations and stay connected through her newsletter, website, and social media.

Maezawa learned how to cook rhubarb when she was an exchange student in New Zealand in high school. Her host mother was an excellent cook and baker, and Maezawa became curious about cooking. In New Zealand, she wanted to make and share Japanese food and called home to learn, Maezawa says.

Maezawa’s grandparents ran a restaurant and catering business in Japan, specializing in traditional Japanese foods like sushi and sashimi. As a child, Maezawa would spend the summertime visiting her grandmother and helping in the restaurant. She remembers her grandmother in a kimono and apron, coming out of the big kitchen to give her a long roll of unsliced cucumber sushi to eat. These memories are the origin of the sushi mega-bites, long handheld sushi rolls, that she makes for the farmers’ market today. 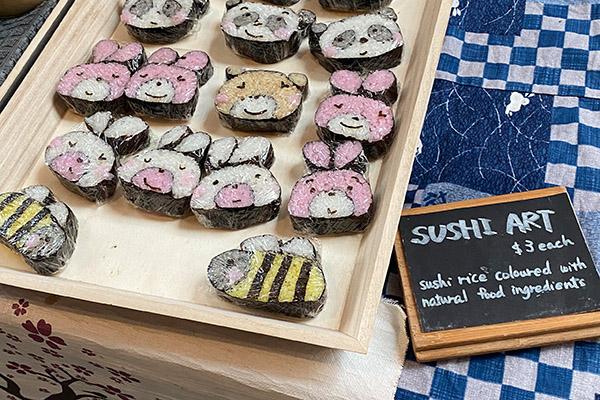 “During summer vacations, I stayed at my grandma’s place for long periods of time to help her. In those years, I never consciously thought of becoming a cook, but I clearly liked my grandmother’s work. She was the person who taught me how to do what I do now and how to enjoy it,” says Maezawa.

Watching her grandmother do work that she loved is a lesson Maezawa wants to show her children. By example, Maezawa shows her children how to take their skills and apply them to work that they love and that brings joy to others. Her two daughters help care for the garden, cook in the kitchen, and at the farmers’ market.

“Of course, I want to show them their Japanese culture as much as possible and hope that they will love it, but at the same time, I want them to learn how enjoyable it is to do work you like,” she says. “What I’m doing here is a simple cycle to live. You grow the vegetables yourself, and with those ingredients, you make something and then sell it at the market to people and buy other ingredients. I want them to learn about it from me. Right now, it’s really important.”