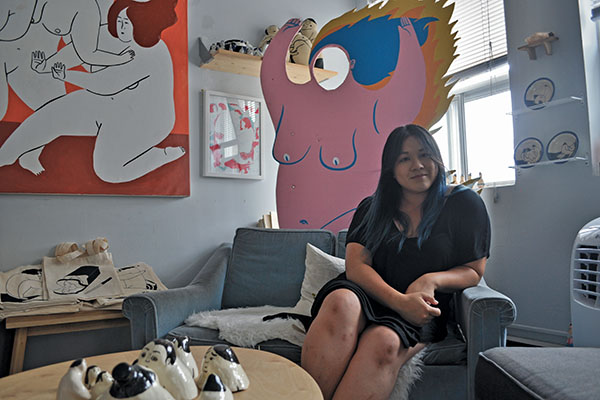 
Artist Ness Lee opens up about sumo wrestlers, sex and finding herself in Asian culture. Pictured, Lee sits among her work in her East Toronto apartment/studio. Photo credit: Lauren Scott.

Toronto-based artist Ness Lee works from her East-end Toronto home studio surrounded by her art. In every corner of the small space there are cute and quirky ceramics, banners, floor to ceiling canvases, cardboard cut-outs, and even sculptures, all hand-made by Lee herself.

Ness Lee has been working as a visual artist in Toronto for about five years. Since graduating with a degree in illustration from the Ontario College of Art and Design, at 27 years-old, her Asian-inspired art has already generated a lot of buzz. She was recently approached by Mia Nielsen, art curator for the trendy Drake Hotel on Queen St. West, to create a piece for a special installation called “Angel Dust.” The name of the piece is “Pleasure Mountain,” which is very fitting for Lee, as her work is largely centred on Asian culture and sex. 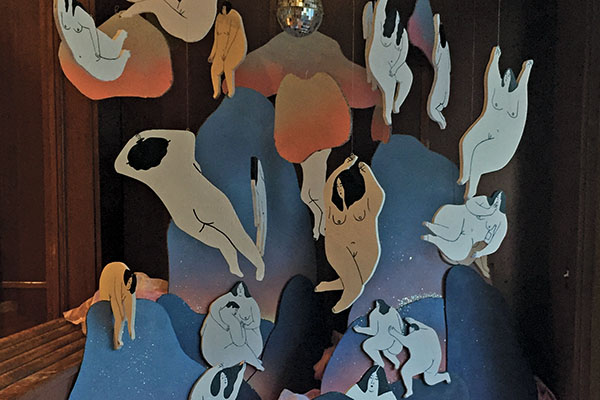 Lee’s art is very eclectic. She makes great use of a variety of different mediums from ink and paper, to ceramics, to textiles and sculptural work, but there is one common theme to her work: large, nude Asian figures.

Lee found herself drawing sumo wrestlers quite often, or people of sumo-like proportions, and it broadened out from there.

“Initially I really liked to draw sumo wrestlers and I got into the sport and everything.” Lee tells Nikkei Voice, sitting in front of a cardboard cut out of a large nude woman in her living room. “I watched it the last two times I was in Japan and it’s such a fun sport.”

Because much of Lee’s imagery is associated with Japanese culture (sumo wrestlers and sushi rolls, for example) her work is often dubbed as “Japanese inspired” by the likes of art culture publications, It’s Nice That and Juxtapoz Magazine. However, Lee says that her art is very much about her exploring her own culture and where her place in the world is.

“I like drawing [sumo wrestlers] a lot, so that’s how it started. Everything else kind of was more in the scope of Asian culture and me finding my identity within it. My figures just kind of ended up being Chinese looking, but a lot of people just refer to it as Japanese,” she explains. “The only reason I figured that happened was because of the sumo wrestlers and… Japanese food, which I love. So I think that’s how it all started with that perception, which I don’t really mind.” 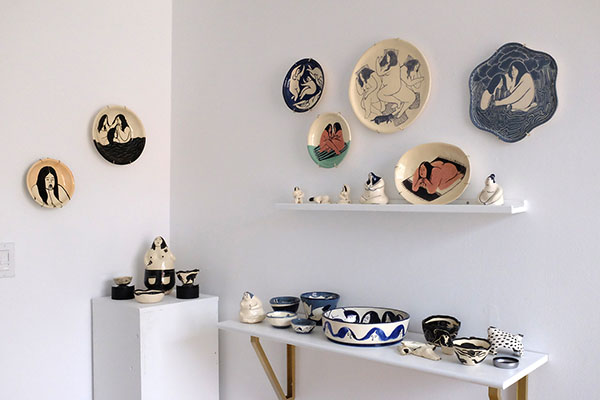 Lee is Hakka-Chinese, whose parents moved from India to Toronto before she was born.

The literal translation of “Hakka” in Mandarin is “guest family.” Hakka people are widely dispersed across the globe and are often referred to as a travelling culture. However, Lee says this Hakka diaspora made it difficult to find a place for herself among her Asian classmates at school.

“I grew up in Markham, in suburbia. Lots of immigrant families are there, and obviously you gravitate towards your own ‘kind,’ I suppose, when you’re at school. So I hung out with a lot of the Asian people, but didn’t [speak] Chinese,” she says. “In a sense that really launched my work into what it is now, because it’s a lot about me finding myself and really knowing my place within this community.” 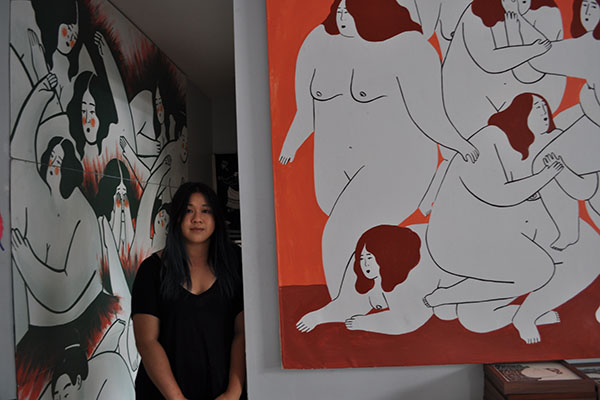 Ironically, Shunga art was inspired by Chinese medicine manuals from the Muromachi era (circa. 1330-1575), which brings Lee’s inspiration full-circle back to her own Chinese heritage.

“I’ve always found the aesthetic and orientation so beautiful and that’s where, for the most part, I have been most inspired,” Lee tells Nikkei Voice. “It’s really elegant and beautiful but then you see this massive dong and they’re having sex.”

However, soft-core pornography does not exactly bring to mind sumo-wrestlers, or their large soft bodies. Lee says there is good reason for choosing this body type.

“Most people ask me, ‘why are they so big? Why are they more plump?’ I told them it’s not necessarily about body image; it is more about a feeling. For me, the larger they are, the greater the feeling,” she says. “A lot of the time, I feel things quite heavily. So, I like [my art] to encompass the whole canvas in terms of mass and take up most of the space, because of how much I feel.” 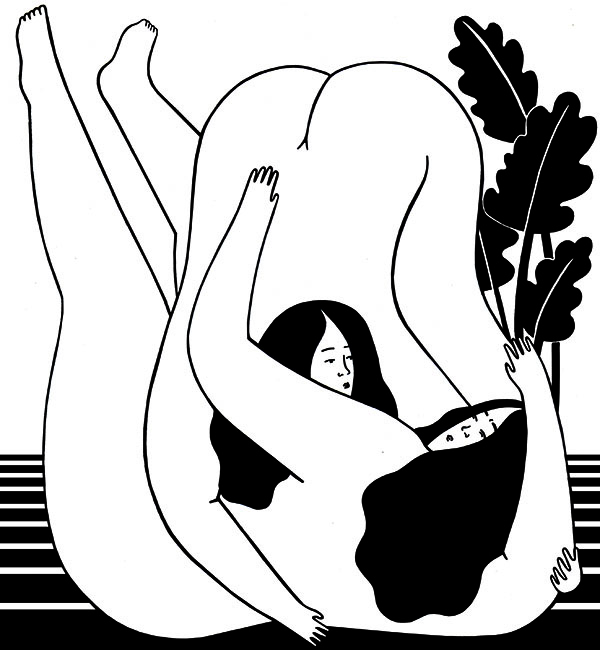 In the studio at the far end of her apartment, Lee has laid out her ceramic pieces on a table by the window. She looks out onto the street below and her black dress sways in the wind. She returns her gaze to the ceramic bowls, each with a nude figure resting inside as if they were bathtubs.

“It’s the easiest way for me to get my thoughts out, through art,” say says. “It’s very meditative.”