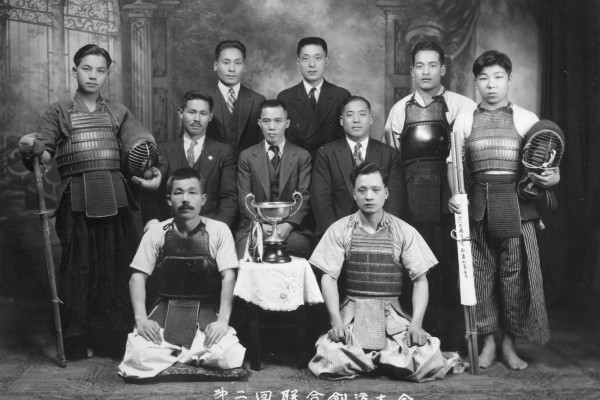 As I write these lines, Canada is on the way to a Japanese takeover. There is nothing sinister in this: the Zen Nihon Iaidō Renmei (All-Japan Federation of Iaido, or ZNIR), the largest association of its kind in Japan, is currently in the process of reshaping its administrative structure to include national organizations worldwide in its own regional chapters.

This decision, which was announced last year, is part of a move to counter the recent creation of a new association, the Kokusai Renmei (International Federation), a splinter group actively promoting the inclusion of non-Japanese practitioners of this ancient martial art. Through its restructuration, the ZNIR hopes to retain its position as the most authoritative organization specializing in iaido, and to tighten its control over schools abroad by appointing a head master to each national association. It is still too early to say for certain, but it appears that Canada (that’s right, the whole country!) will be absorbed by the Kantō area chapter of the ZNIR, under the supervision of Master Haruo Katō.

This shouldn’t come as a shock for most of us: corporations have been increasingly involved in transnational activities for the last few decades, and it is now common practice for a parent company to control a few or many foreign subsidiaries. What isn’t well known is that this is not the first time that a major Japanese martial arts organization set its aim on practitioners living on this side of the Pacific.

Indeed, on February 21, 1935, His Imperial Highness Nashimoto-no-miya Morimasaō gave his assent to the creation of the North American chapter of the Dai Nippon Butoku Kai (Greater Japan Martial Virtue Society, or DNBK) to “foster in the nisei a continuing interest in kendo, and to raise [them] as true Japanese.” The DNBK, which was founded in 1895 with the support of the national government and under the patronage of the Meiji Emperor, evolved into the single most authoritative Japanese martial arts organization before WWII. It functioned as a licensing authority for practitioners and instructors, and also trained military personnel in various hand-to-hand and weapons techniques. The DNBK’s influence was such that the Allied Occupation wasted no time in crippling it; the association was disbanded altogether in the fall of 1946.

The question that comes to mind naturally is: considering its links to both the imperial household and to Japanese armed forces in the first half of the 20th century, to what extent, if any, did the DNBK control the activities of the earliest kendo clubs in Canada?

While the written evidence is relatively scarce, it appears that the year 1914 was a pivotal moment in the institutionalization of kendo in North America. Whereas only a few isolated individuals may have practiced their swordsmanship in the early years of immigration to the United States and Canada, that year saw both the creation of a dojo in Steveston, and a first kendo tournament, which was held in the San Pedro district of Los Angeles. With dojos popping up in many places, some quite remote, these early years must have felt exhilarating. There were, however, many problems, including the difficulty of finding qualified instructors, who would teach for little or no compensation at all. Equipment was another issue: the cost of bogu (armor) sets, which were all made in Japan, was prohibitive. This meant that practitioners often had to use pieces that did not exactly fit their body size.

Nevertheless, at the outbreak of the Pacific War, there were thousands of kenshi (swordsmen) in North America, including a few hundreds divided among the six Canadian dojos. As far as I have been able to ascertain, there is no evidence that Canadian dojos were ever directly affiliated with the DNBK–nor, for that matter, with its competitor, the Hokubei Butoku Kai (North American Martial Virtue Society). There are many reasons that can explain this, not the least being that Canada as a country never was a major source of concern for Japanese authorities until well after the end of the Second World War, especially when compared to the United States. This does not mean, however, that Canadian kenshi were unaware of the organization’s presence.

In 1940, there were 25 dojos affiliated with the Southern California chapter of the DNBK, and it is a known fact that Canadian kenshi regularly participated in tournaments organized jointly with U.S. kendo clubs. It is therefore very likely that, notwithstanding their own position vis-à-vis the Japanese imperial project, Canadian practitioners would have at least been exposed to nationalist propaganda, the same way that iaido tournaments in Japan today are still preceded by the singing of the Japanese national anthem (Kimi Ga Yo) and Shintō devotions.

The fact is that kendo clubs, like most Nikkei associations, served many functions that went beyond the performance of their more obvious activities. As social institutions, they were also sites of cultural (trans)formation, where old and new ideas mixed and clashed, and collective identities were reimagined. They were places where Issei and Kibei would teach traditional Japanese values to the Nisei, at the same time as the latter tried to negotiate their way between two vastly different worlds. Children, in particular, were often at the receiving end of opposing ideologies, and this must have had a considerable influence in the shaping of each individual’s worldview.

Essays written by students of Tsutae Satō’s Japanese Language School in Vancouver reveal that, while they would grow up to be upstanding Canadian citizens, the children were indeed proficient in the language of Japanese nationalism and empire; there is little doubt that events such as school ceremonies to commemorate the 2600th anniversary of the mythical founding of the imperial line, in 1940, strongly contributed to the reproduction of this discourse. In fact, the Nikkei National Museum’s collection includes a picture (its access is restricted and therefore it cannot be shown here) of a ceremony held on November 30, 1940 to celebrate the promotion of Motoo Matsushita to the rank of shihan (master); the picture’s Japanese-language caption clearly references the 2600th anniversary (紀元二千六百年) of the foundation of the Japanese Empire. Kendo clubs, much like any other social institution, could easily become ideological battlegrounds.

We know from different sources (such as Linda Ohama’s excellent Obaachan’s Garden) that some individuals actually supported Japan’s war efforts, and that the traumatic experiences of the forced relocation and confinement lead others to take uncharacteristically “radical” actions. Moreover, it is easy to imagine that the possibility of belonging to a large organization such as the DNBK may have been attractive to some Canadian kenshi, if only for its promise of financial and logistical support. And yet, all of the above notwithstanding, there is no indication that the DNBK succeeded in converting any number of kenshi into rabid military-nationalist supporters of the Japanese Empire.

The fact that, in the end, Canadian dojos were not openly affiliated to the DNBK or the Hokubei Butoku Kai speaks volume of the politics of their members and the choices that they made. Many kendo dojos cropped up everywhere in Canada in the immediate postwar years, and some are still operating today. They were founded by instructors and kenshi (some of whom began their kendo journey in camps!) who elected to stay here, and there is no doubt in my mind that they were passionate, dedicated and fiercely independent people.

The author is a Ph.D. candidate in History at McGill University, a Vanier Canada Graduate Scholar, and an instructor of iaido (6th dan) and kendo (2nd dan).

This article appeared in the June issue of Nikkei Voice.