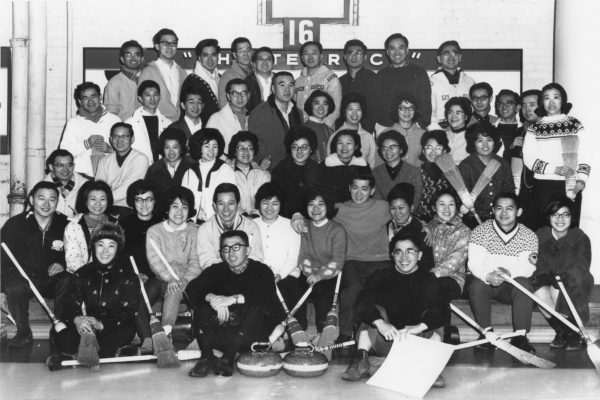 
Curling Club has been a way for JCs to socialize for over 50 years. Nisei Curling Club and a  JC curling club visiting from Montreal for a little friendly competition in Toronto. Circa 1964-66. Photo credit: JCCC Heritage.

TORONTO — After the end of Second World War, Japanese Canadian families left the internment and PoW camps for various parts of Canada. Many settled in the Toronto area, where they struggled to find new roots in a society where they were viewed as second class citizens.

Around that time, the Japanese Canadian community got together to build the original Japanese Canadian Cultural Centre at 123 Wynford Drive (1963) and formed a number of social and sport clubs, some of which have survived to today. One of these clubs is the Nisei Curling Club, which chose The Terrace on Mutual Street as its first home.

Up until 1962, the hockey rink known as the Mutual Street Gardens was host to Toronto St. Patricks hockey team (forerunner to Toronto Maple Leafs) in its early years. After the change in ownership and redevelopment, The Terrace became the social hot spot in Toronto with its roller skating arena, 18 sheet curling rink and restaurant.

In curling, Niseis found a sport that was both sociable and affordable and helped pass the winter months away.

Curling allowed young Japanese Canadians to socialize and mingle, while taking up a sport which today is as Canadian as hockey (even though the sport was invented in Scotland).

In 1989, when The Terrace was sold to developers, and Nisei Curling Club moved to Avonlea Curling Club at 101 Railside Drive in Don Mills, where they continued to hold their weekly curling competitions on Friday evenings.

In its heyday, Nisei Curling Club rented six sheets of ice and boasted approximately 60 regular and spare members. When Avonlea was sold in 2006 to an indoor soccer consortium, Nisei Curling Club was forced again to move, this time to Unionville where it now curls on Sunday evenings between 7 to 9 p.m. during the winter season.

Through TV exposure and its development as a professional sport, curling has gained a real momentum and popularity worldwide.

Curling is an on-ice sport that mixes complex strategy with fine execution and sportsmanship. Over the past several years, Asian countries such as Japan, China and Korea have started to establish themselves as some of the world’s best curlers, albeit they still can’t match Canada for its depth of quality curlers. For those that love to golf in the summer, curling is a great fit between golfing seasons.

If you’re interested in trying to curl, Nisei Curling Club is welcoming new curlers and has an instructional programme for those wishing to learn or improve. For inquiries, please contact Nao Seko either by phone (416) 579-6921 or by email at nseko@masamigroup.ca.