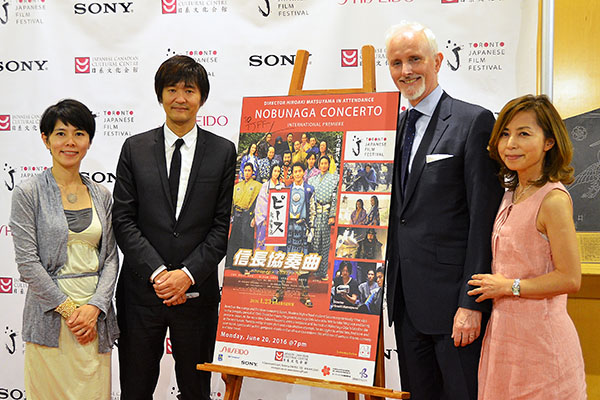 Hiroaki Matsuyama brought the tale of Oda Nobunaga to a new audience with a leap from television to film.

Hiroaki Matsuyama is no stranger to the story of Oda Nobunaga, the man who set out to unify Japan during the Sengoku period.

Matsuyama is the director of both the Nobunaga Concerto movie (2016) and the television series (2014), which re-imagines the story of Nobunaga in a fresh and compelling way.

The new film is based on Ayumi Ishii’s manga of the same name, which follows the story of a high school student who slips through time and must become Oda Nobunaga. Matsuyama was in Toronto for the Toronto Japanese Film Festival and the Canadian premiere of Nobunaga Concerto at the Japanese Canadian Cultural Centre.

Nikkei Voice sat down with Matsuyama to talk about the film and his promising career. The following are transcribed from the translator’s words

Nikkei Voice: What drew you to the story in Nobanaga Concerto?

Hiroaki Matsuyama: The original story is based on the comic books and Nobunaga is a very well known character that all Japanese people know, but in the comic book it is actually a high school student, and time slipped and he became Nobunaga. I thought it was quite interesting, the gap between Nobunaga’s character that everybody knows and the difference between the high school student and real Nobunaga from history.

NV: Nobunaga is a popular character in Japan, so how does Nobunaga Concerto differ from the countless other pop culture depictions?

HM: There are so many Nobunaga characters, but it is quite rare that Nobunaga is a guy from our current era. So, it is so different from any other Nobunaga characters in pop culture. When I was doing research about Nobunaga, he is really like a businessman or a business owner, the way he does things or the way he thinks. So, it kind of makes sense that he is from this era and knows the mechanism of how business works or how a business owner would do things.

NV: Because there have been so many previous Nobunaga adaptations, what has the response of the audience been like in Japan to this new take on an old character?

HM: When I made the Saboro character, I tried to make sure that people can really sympathize with Saboro. So whatever he says or does, the audience told me they really felt sympathy with him.

NV: Was it intimidating to re-imagine a character who had been re-imagined so many times?

HM: In Japan, so many people know who Nobunaga was he stood for, so for this particular tv series and movie, I purposely changed things. It is a new way of discovering Nobunaga and what he stands for. I did it on purpose to make it interesting. It is not a real Nobunaga historical story, so I am a little nervous because today’s audience, many of them are Canadians who don’t really know anything about Japanese history, so if they watch this film and they think this is real history or the real Nobunaga, it’s actually not, because I changed it on purpose. I changed the characters and story. So that makes me a little bit nervous, but for the Japanese audience I did it on purpose.

In history, the textbook says that the person who killed Nobunaga at Honno-ji is Akechi Mitsuhide. People don’t really know why, but that’s the fact. If you watch it, you will know that someone else killed him in the movie, so that’s the big difference.

NV: What do you want viewers, both Japanese and Canadian, to take away from the film?

HM: The character came from now when there is no war in Japan, and he time slipped to a time when Japan had a lot of wars between samurais, so when he became Nobunaga, he wanted to stop the wars and he was hoping for peace. So, the character basically wants peace and no more.

NV: Because you directed both the Nobunaga Concerto TV series and the film, how do the two compare to each other? Were there new challenges with the film that you didn’t have with the TV series and vice versa?

HM: For the TV series, it was more focused on Saboro, but the movie has both Akechi Mitsuhide and Nobunaga, which are played by the same actor. So during the TV series, it was quite difficult to do both characters with one actor because we didn’t have a lot of time and the actor was busy. For this movie, he tried to make sure that he could play both characters and give them an equal amount of time. Basically, that’s what is meant by ‘Concerto,’ he is playing two characters.

NV: Was that very challenging for the main actor, Shun Oguri?

NV: What are you most proud of with this film?

HM: When I received people’s opinions, they said ‘I could really think about peace, when I watched the movie,’ I was really happy because that is the message that I want to give the audience.

NV: Was there anything lessons that you learned as the director of Nobunaga Concerto that you will apply to your career later on?

HM: For a samurai film, I had to use staff who had been working on samurai films in Kyoto, so they know how to make samurai movies and roles and cultures and how to film particularly for samurai films.

Nowadays, there are not too many samurai films made in Japan, especially for young people, so there are not so many people who know how to shoot that kind of film anymore.

So I got to learn how to make samurai films and I want to teach young people and newcomers how to make them, because that is the great thing I learned through making this film and television series.

NV: If it was your first time working on a samurai film, what was it like to shoot all of these intricate fight scenes as someone who hadn’t previously done a movie like this?

HM: Fight scenes are actually not that difficult, but I had to shoot daily life scenes. For example, just walking, how to put the swords, how to open a door, that is very different from the current style. So that is what I really had to be careful of.

NV: What sorts of things make samurai films so different from the current style?

HM: When you wear kimonos there are certain manners and rules that you have to follow, even just how to walk, how to stand up, how to open a door to make you look nice. I think at the time, there were so many rules.

I think the mannerisms of the time changed so much after we got Western influence, so maybe that’s why it’s so different.

NV: Is there anything else that you would like your audience to know?

HM: It’s not really about the details of historical moments, but more about the message of peace. If the audience can take away this message, that would be great.