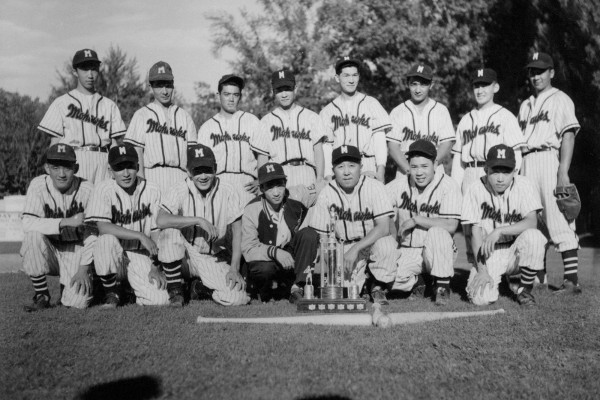 KAMLOOPS – Shortly after World War II many interned Japanese families were allowed to move into the Interior of B.C. and made the city of Kamloops their home. Amongst these families were a small group of young Japanese men who wanted to pursue and create a baseball team.

This team, originally known as the Kamloops Nisei Athletic Club (KNAC) and eventually commonly known as the North Kamloops Mohawks, was formed in 1952. The name “Mohawks” was chosen because it was thought at the time to be a neutral name, being so soon after the war. Also, during this time names like Cleveland “Indians” and Chicago “Blackhawks”, were very popular major sport team names.

The league was run by the B.C. Interior Baseball League with teams from Kamloops (Jay-Rays and Mohawks), Rutland (Adanacs; with Koga brothers: Mits, Morio, and Sue), Vernon, and Merritt. In previous years, there was also a team from Revelstoke (with big Pradolini brothers).

The North Kamloops Mohawks were a well-coached and managed team. The ‘Mohawks’ first coach was Seiji Kazama, who coached for the first one or two years. He was followed by Pat Miyahara, with Johnny Shimodaira as their team manager. The KNAC sponsored the team while local businesses donated uniforms for the players.

This article appeared in the June Issue of Nikkei Voice.


I earlier today was thinking about the Kamloops Mohawks who I as a young guy I really enjoyed watching. I knew Art Yuen and Sam Aura and met my favourite Mohawk, Stan Kato at the KHS 100 year reunion. I am very pleased to learn from Google and George Uyeda’s article that the Mohawks are in the Kamloops Sports Hall Of Fame. Good going all!! Brian N Stoodley