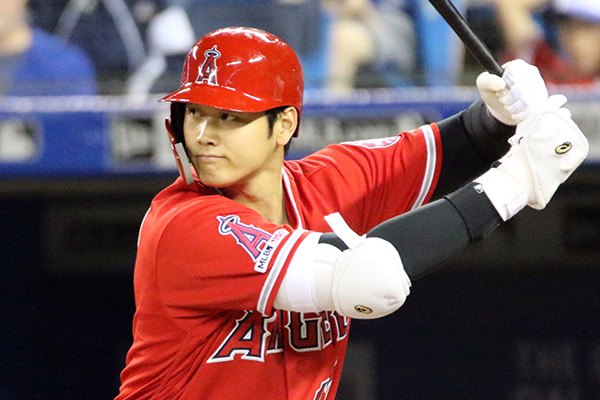 LOS ANGELES, Calif. — Los Angeles Angels’ Shohei Ohtani has solidified his name with legends, coming off one of the most remarkable seasons in over 100 years of MLB history. Along with being recognized with the Commissioner’s Historic Achievement Award, Ohtani has won every MLB player of the year award possible; the MLB Silver Slugger Award (AL designated hitter), the unanimous winner of the MLB AL Most Valuable Player, Edgar Martinez Award for Outstanding Designated Hitter (DH), and finally named to the All-MLB Teams as both a DH and pitcher (P).

“Sho-Time’s” incredible 2021 season is hard to sum up in words. What he has accomplished is awe-inspiring. Our last update was just before the All-Star Game when Ohtani became the first player in MLB history to be named the starting pitcher and bat leadoff. He retired three batters at the top of the first and went 0-2 at the plate, earning the win in his All-Star debut. Not faring as well in the Home Run Derby, fun was still had by all.

His first half of the season was heavy in hitting, but with a season-ending injury to superstar teammate Mike Trout and as playoff spots tightened, teams pitched differently to Ohtani, often choosing to walk him instead. On Sept. 24, he tied an MLB record with Bryce Harper (2016) for the most walks in three games, with 11.

On Aug. 31, in a game versus the Yankees, Ohtani successfully stole home on a double-steal attempt with a runner on first. An exceptional play by any elite runner, statistics from the first decade of the 2000s indicates that it accounted for approximately 1.2% of all stolen base attempts. Of those, only about a quarter of those attempts were successful! Not even the Great Ichiro has ever stolen home, and he once swiped 56 bases in a season! 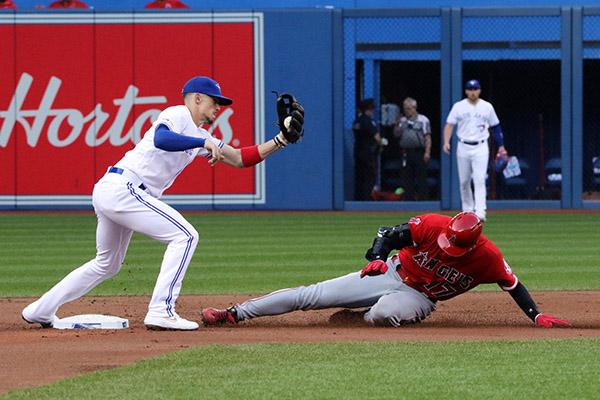 Los Angeles Angels’ Shohei Ohtani stealing a base from the Toronto Blue Jays. This photo was captured when Ohtani was playing at the Rogers Centre in June of 2019. Photo credit: Dr. Jonathan Eto.

On offence, he finished the season with 100 RBI, 103 runs, 26 stolen bases, 46 home runs, and a .257 batting average over 537 at-bats. He also led the league in intentional walks, triples, at-bats-per-home run, wins above replacement (WAR), and was recorded to have the fastest average speed out of the batter’s box to first base.

In Japan, his nickname is the “Real Nitoryu,” an expression for a samurai fighting with two swords at once, an analogy to his two-way season. Not since Babe Ruth in 1919 has there been a player with a successful full season of both pitching and batting.

For Ohtani’s successful season, he was awarded the Commissioner’s Historic Achievement Award before the first game of the World Series. The trophy, designed by Tiffany & Co., featured a golden baseball mounted on a sterling silver base and was last awarded in 2014.

After putting up one of the greatest seasons we’ve ever seen, the sensational Shohei Ohtani will become just the 16th recipient of the Commissioner’s Historic Achievement Award. pic.twitter.com/zBozIVTJMd

After the World Series, the awards started to pile up, including Player of the Year, by virtually every outlet, including the Player’s Choice (selected by the MLB Players Association), Baseball America, Baseball Digest, Sporting News, and the Excellence in Sports Performance Yearly Award a.k.a. the ESPY Award (presented by ABC, previously ESPN). Then the MLB Awards rolled in, first with the Silver Slugger Award for best offensive season in each position (AL, DH) and ultimately was unanimously voted the AL MVP. He also became the first player in MLB history to be voted to the All-MLB team as a positional player (1st team DH) and pitcher (2nd team P).

But the accolades extended beyond North America, as the day after Ohtani won the AL MVP, the Tokyo Tower at precisely 5:17 p.m. (17:17) shone red with his number (#17), displaying a congratulatory message on its main deck to honour his achievement. He was even offered Japan’s National Honour, the People’s Honour Award, but modestly declined it, stating that it was “still too early,” implying he had much more to do to receive such an award.

Only time can tell how healthy Ohtani can continue to play at this level but let’s hope he continues to rewrite history and change the face of baseball for years to come.


[…] Ohtani receives historic award for his season of a century […]


[…] Since then, Ohtani Canada has grown to be the largest Shohei Ohtani fan club in Canada, with almost 1,500 followers. Ohtani Canada is the most interviewed Ohtani fan club, not only in Canada, but also in Japan, often appearing in Japanese media coverage. While the club has grown in numbers, it has also formed a sense of community and camaraderie among a group of people who share one major-league connection, a deep admiration for Shohei Ohtani. […]