Okinawans prepare for Super Typhoon Neoguri, one of the strongest in 15 years 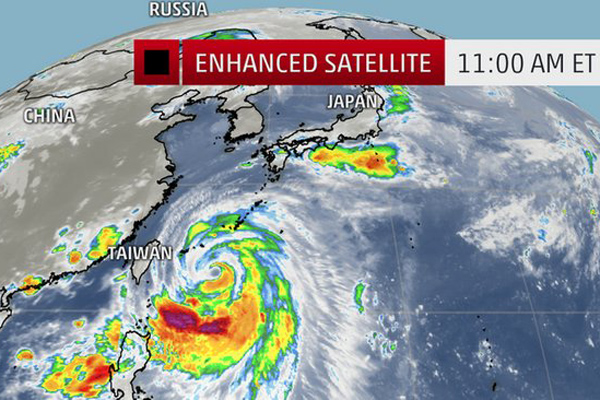 Super Typhoon Neoguri is forecast to pass dangerously close to Okinawa and other parts of Japan over the next few days.

On Friday, the weather system was classified as a typhoon and is currently turning northward about 340 miles south of Kadena Air Base, a U.S. Air Force installation on the island, according to Weather.com.

A “Super Typhoon”, according to Atlantic Oceanographic and Meteorological Laboratory, is a weather system that sustains 150 miles per hour (240 Km/h) winds. Neoguri was upgraded to this category early Sunday when wind speeds reached 155 mp/h.

“Please be vigilant, stay inside buildings and avoid working outside and making unnecessary trips,” a meteorological agency official said at a press briefing.

The official warned that the typhoon could stir up “record level” wind and waves.

“It is likely to arrive in Okinawa Tuesday morning, generating violent gales and high waves… and, in some areas, violent rains,” he said. “Please be ready to evacuate.”

“I can’t stress enough how dangerous this typhoon may be when it hits Okinawa,” Brigadier General James Hecker of the 18th Wing stationed in Kadena said in statement.

“This is the most powerful typhoon forecast to hit the island in 15 years; we expect damaging winds to arrive by early Tuesday morning, so be prepared!” Hecker said. “Tie down your outdoor items and work with your neighbors to help them.”

Described as a “once in a decade storm”, Okinawans are now battening down the hatches as it passes over 100 miles of the island as it continues North.

The storm will be passing over Japan’s main island of Honshu and is expected to lose some power as it passes over land, but wind and heavy rain could cause flooding, landslides, and other damage.

Japan’s weather agency has issued its highest alert as Neoguri heads towards the islands.