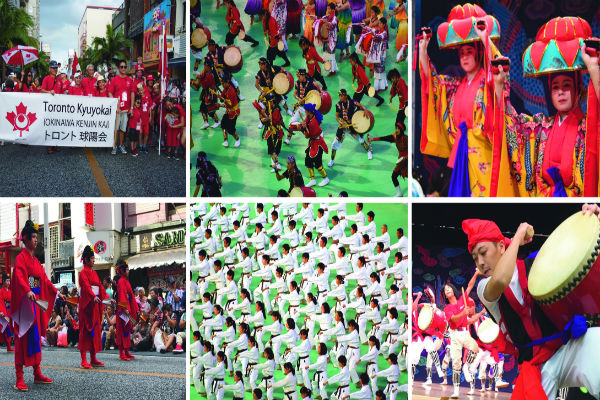 The 6th Worldwide Uchinanchu (Okinawan) Festival held its Closing Ceremony on Oct. 30 in a festive Okinawa Cellular Stadium in Naha City, after completing its four days of events. Uchinanchu is the term for immigrants and their descendants from the Okinawa prefecture. A total 15,395 people from Okinawa, other prefectures, and 26 different countries attended the ceremony.

The festival has been held roughly once every five years since 1990. It is meant to give a chance for Okinawans living abroad to come back to their homeland and deepen bonds with fellow Okinawans.

As well, as Okinawan Governor Takeshi Onaga says, “appreciate the various charms of Okinawa” which include “the locals’ spirit of icharibachode” (hospitality, and treating even strangers as one’s siblings).

The festivities began with a parade down Kokusai Dori Street. Catherine Nakaza, a “new” second generation Okinawan from Toronto expressed her feelings: “Thousands of participants proudly representing their home countries also demonstrated how proud they were to be Okinawan,” she said. “The streets were filled with locals welcoming us back to Okinawa. Many were so emotional that one could not help but be moved.”

Having attended the previous festival, Nakaza said that she was amazed by how many more participants were at the festival compared to the last, from both overseas and locally. She said it was evident to her that everyone living abroad found the Uchinanchu festival a very important way to keep the culture of Okinawa alive.

Marlene McCaughey, a third-generation Okinawan from Lethbridge, Alta, has participated in the festival three times. To McCaughey, “The festival provided us with opportunities to experience Okinawa at its finest,” she said. “The programs and events allowed us to experience the sights, the sounds, the smells of Okinawa such as sanshin, eisa dances, karate demonstration, hanagasas (flower hats) and bingata kimono, to name a few. The opening and closing ceremonies were absolutely stunning. For me it [the festival] stirred up feelings of immense pride in my roots and country of origin, like no other.”

Yoshihiro Kamiyama, president of the Toronto Okinawa Kenjinkai, expressed his gratitude to Governor Takeshi Onaga and his executive committee members for their hard work for preparing the festival.

“By attending the thoughtfully planned and organized programs, we all reconfirmed our pride as Uchinanchu,” he said. “As well, we were able to develop Okinawans’ network further which we should pass on to the next generation.”

It was announced at the closing ceremony that Oct. 30, the day when the Uchinanchu gathered together from all over the world, be designated as ‘World Uchinanchu Day.’ The idea was proposed by two participants, one from Argentina and the other from Peru.

They proudly declared: “Let us establish today October 30th as ‘World Uchinanchu Day,’ and let us engrave it on our Uchinanchu souls.”