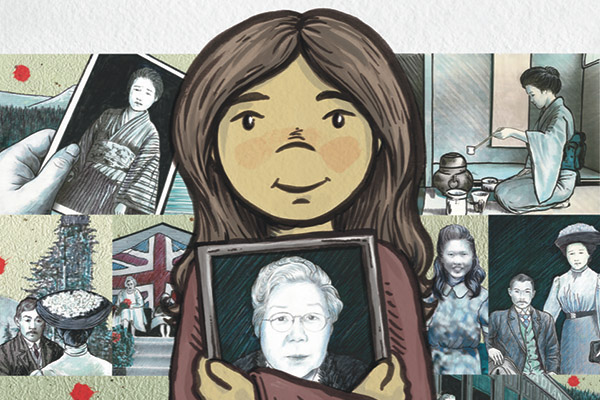 What does it mean to be Yonsei or Gosei? What does half or quarter Japanese look like? The Japanese Canadian community has one of the highest intermarriage rates in the country, meaning new and vibrant generations of mixed-race children. Two Japanese Canadian artists want to help these children navigate their cultural identities and understand that they are so much more than fractions or mathematical equations.

Artists Jeff Chiba Stearns and Lillian Michiko Blakey are looking to bridge the gap between generations of Japanese Canadians and teach preteens about their heritage and history with their new graphic novel, On Being Yukiko.

The story follows a young girl named Emma who is trying to understand what it means to be Japanese Canadian. She feels she doesn’t look Japanese, but she has a Japanese name, Yukiko, that only her grandmother uses. Seeing that spark of curiosity, Emma’s grandmother tells her the story of their family in Canada. Beginning with her great-great-grandmother arriving as a picture bride to the family’s forced relocation to a sugar beet farm during the Second World War, to rebuilding their lives in postwar Toronto.

“What we want to do with the book is help instill a better sense of identity in kids, and a lot of times identity stems from your cultural heritage and your family history,” Stearns tells Nikkei Voice in an interview.

“Whatever you inherit genetically is part of you, the stories that you inherit, are part of you, and it all goes towards making you feel more like a whole person,” adds Blakey. “I think it is really important for all kids to know about their family histories, that it is a really big part of who they are, and that they should embrace it and be proud of it.”

The book beautifully interweaves two storylines together from the past and the present. The past follows the story of Emma’s great-great-grandmother, Maki, coming to Canada as a picture bride and the generations of women that followed her. The present is Emma’s story, as she tries to understand her family history by asking her grandmother questions and sharing what she has learned with her friends. 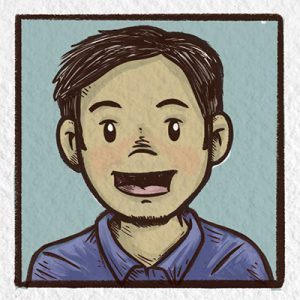 Self-portrait of On Being Yukiko‘s author/illustrator Jeff Chiba Stearns.

An intergenerational story that spans five generations of Emma’s family, the book is also told by two generations of artists, Stearns is a Yonsei and Blakey a Sansei. Stories from the present are illustrated in Stearns’ “hapanimation” style, an amalgamation of Japanese animation and manga with a North American cartoon-style twist. Stearns is a Vancouver-based illustrator, author and Emmy-nominated filmmaker behind films like What Are You Anyways?, One Big Hapa Family and Mixed Match.

The stories from the past are illustrated in Blakey’s sketch-like, realistic portraits. Blakey is an artist currently based in Burlington, Ont. A retired visual arts teacher, her artwork has been shared in exhibitions both mainstream and for Japanese Canadians, including the permanent collections of the Government of Ontario Art Collection and the Nikkei National Museum, as well as exhibited at the Royal Ontario Museum. 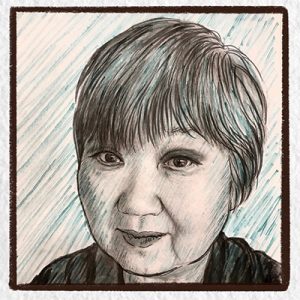 Self-portrait of On Being Yukiko‘s author/illustrator Lillian Michiko Blakey.

Together, their unique art styles merge to tell one cohesive story. Instead of being a story just retelling the past, Emma’s voice carries and questions the events in the story, so young Japanese Canadians can recognize their voices as they read, and see how they fit into this story.

For both artists, this project is deeply personal. For Stearns, with two young children under four, he wanted to create a story he could read with them when they got older, and they could ask questions about their shared cultural history. He is creating the kinds of stories that would have helped him navigate his own cultural identity growing up as one of the few mixed-race children in his Kelowna school, says Stearns.

For Blakey, this story is a retelling of her family history, and Blakey is the grandmother in this story. Blakey was born in Coaldale, Alta. in 1945, on the sugar beet farm, and her family was forcibly relocated to during the Second World War. She grew up disconnected and rejecting her heritage, and she did not start exploring her Japanese Canadian identity until she was in her 60s. Blakey learned her family story when she asked her mother to sit down and write what she remembered. Her mother told her it wasn’t a story worth sharing, says Blakey. Her mother’s story was one of hardship, loss, and perseverance for the sake of a better life for her children.

Blakey says she regrets never asking her grandmother more about her past, but her grandmother, who repatriated after the war, no longer spoke English. Blakey wanted to create a book for her grandchildren, so they could understand their history.

“When I looked at my own children and their children, I know that haven’t shared very much… I could see the whole story of what had happened and the value of what it means to be Japanese, slipping away,” says Blakey.

On Being Yukiko will be independently published by Stearns’ company, Meditating Bunny Studios Inc., and printed by a Canadian company in Manitoba. Using a publishing house can take years, and they wanted to get their book in the hands of Nikkei youth now, says Stearns.

Since the book is based on personal family stories and covers complex topics like race, identity, and Canadian history, they wanted to get community input during the editing process, explains Stearns. Community organizations and community members and their children and grandchildren to read drafts of the book. Blakey, a former consultant for an equity in the curriculum program with the North York Board and a retired educator, asked her network of librarians and educators to read the book.

“It’s important because this is a project, not only for the community, but it is going to go out, hopefully into schools, and we want to make sure all the facts are right, and all the details are correct,” says Stearns. “I think for us, the support from the community has been very strong, we have been very fortunate that we’ve had that support.”

They were overwhelmed with the support and feedback, spending months working that feedback into the book. From the clothing of the past to the current dialogue of preteens, they wanted to make sure the information was accurate and authentic. The book also received funding from the National Association of Japanese Canadians endowment fund.

Stearns and Blakey hope that this story becomes a jumping-off point for families to talk about their stories and histories with the younger generations in their families. It is a way to ensure that the history and culture of the Japanese Canadian community are not lost over time. 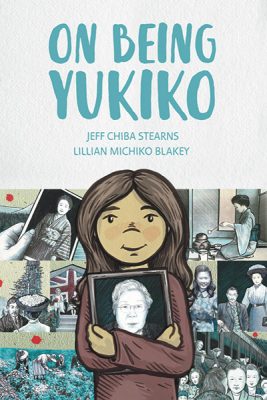 “I was really pleased that a lot of the kids and their parents or grandparents got into really deep discussions about their own backgrounds, and that’s what we want this to be, a beginning to look at a family story and how they came to Canada, and the challenges and joys they’ve experienced here,” says Blakey.

While Emma learns about her Japanese Canadian family’s story in this book, Blakey says it can be a story for all Canadians and hopes other families will see their stories reflected in Emma’s.

“It’s really about everybody who comes to Canada to belong. It’s really very difficult to integrate into mainstream society if you have language barriers and cultural barriers and all those things,” says Blakey.

Stearns and Blakey hope the book can also get into the hands of teachers. The book covers relevant topics to children today, about race, identity, and social and racial injustice. While the book is only 56 pages, it can be a springboard for important discussions in the classroom. They also hope this book will spark curiosity for Japanese Canadian children. That they will want to ask questions and learn about their family history and find pride in their cultural history and identity. They hope that parents and grandparents who read the story will be inspired to share their own, says Stearns.

“With this book, not only is the history of the Japanese Canadian community important, but the future of it,” says Stearns. “I think this is what we’re really stressing on, that this is a book of past, present, and future. We want the next generation to not just discuss the history and heritage, but also themselves, their own identities and encourage that dialogue too.”

On Being Yukiko is set to release in early December. For more information or to pre-order a copy, visit: www.meditatingbunny.com