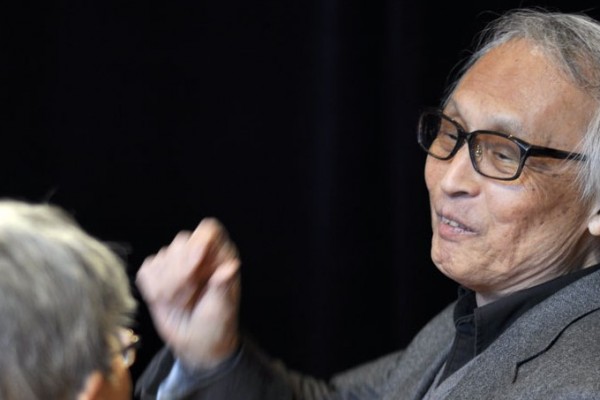 On Saturday, a reception was held to honour Order of Canada recipient and playwright Toyoshi Yoshihara, for his works and for his translations of North American plays for Japanese audiences.

Inside the small theatre at Wychwood Barns near to Christie Station in Toronto, Yoshihara was introduced by James Roy, former CBC Radio Drama Producer and Artistic Director of the Blyth Festival and his partner Lynda Hill.

As someone who has worked closely with the Blyth Festival, and many festivals here, Yoshihara is a well known hand in the Canadian and Japanese playwriting scenes and entering into the small theatre, Yoshihara was greeted by many of friends in the Canadian theatre circuit and many asked him why he wasn’t wearing his newly acquired medal.

“I had enough of that last night,” Yoshihara laughed telling the small crowd about the ceremony held in Ottawa the previous night.

Although Yoshihara was honoured for receiving the Order of Canada, he has also received a number of other awards in recognition of his work.

In 2008, Yoshihara received a Lifetime Achievement Award from the University of British Columbia and Kirsty Johnston, who presented the award, recounted many of his experiences in the Canadian theatre scene.

Arriving in Canada during the 1970s boom in theatre, Yoshihara was enthralled by Canadian plays and found himself watching and then re-watching plays all of the time. These experiences and many others made Yoshihara feel at home in Canada.

“Toyoshi Yoshihara came to Vancouver in the 1970s as a businessman,” Kirsty Johnston from the University of British Columbia said during an awards ceremony in 2008. “He once explained to me that he quickly felt at home in Canada when, almost immediately, a stranger asked him for directions on the street.”

“For Yoshi, theatre-going, and particularly repeat theatre-going, became a great way to immerse himself in those aspects of Canadian language and culture missed by more formal training and study,” Johnston said.

This was something echoed by Margaret Lyons, retired vice president of English Radio at the CBC, at Saturday’s reception.

“He watched plays to learn Canadian English,” said Lyons. “It helped immerse him in the culture.”

While known for his work in theatre, Yoshihara also worked as a chairman of Komatsu Canada for many years before his retirement. His ability to work on translations on the side of his demanding job at Komatsu showed his dedication to the craft and to bringing Canada’s plays overseas.