The best goal of all: Paul Kariya inducted into the BC Sports Hall of Fame 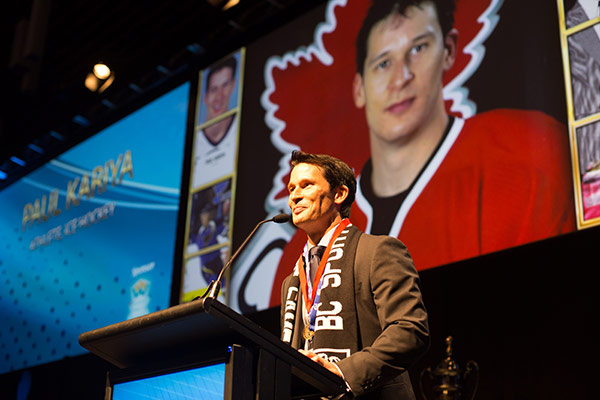 Paul Kariya speaking at his induction at the BC Sports Hall of Fame. Kariya retired from professional sports in 2011 after a 16-year career in the NHL and now spends his time surfing and skiing with family in California. Photo by: Kayla Isomura

It’s been a long time since Paul Kariya has stepped into the spotlight or even spent time skating on the ice.

Instead, the longtime member of the Anaheim Ducks has been living in California, enjoying every sport other than hockey.

But Kariya, 40, left that behind for a few days in late May when he was inducted into the BC Sports Hall of Fame. He emerged into a large ballroom for the Hall of Fame’s Banquet of Champions, accepting his induction in front of a few hundred attendees.

“Never in my wildest dreams would I think I’d be here tonight,” he told Nikkei Voice. “When you’re playing, or growing up, you never think of receiving an honour like this.”

Kariya was born in Vancouver to a Japanese father who was born in the Greenwood internment camp and a Scottish mother. In 2011, he announced his retirement after a 16-year career on the ice. Kariya suffered several concussions during his career, which led to his retirement.

It was a hard first couple of years following his decision, but he’s now found a new routine that doesn’t involve hockey at all, except skating with his niece and doing “a little bit of roller blading.”

He’s also found a new interest in surfing and skiing.

“I’ve always enjoyed doing a lot of different sports growing up. When I was 15 or 16, I stopped,” he said. “All I did was play hockey, so it’s been nice to get back into doing other sports.”

Kariya was one of five athletes inducted into the BC Sports Hall of Fame this year, including Olympic speed skater Denny Morrison and wheelchair rugby’s Garett Hickling.

When discussing the highlights of his career, Kariya turned to the 1994 Winter Olympics.

“I was an amateur,” he said. “When I was a kid growing up, I was told that I’d be too small for the NHL, maybe my skills would be okay for the Olympic games on the big screen, so that was my goal. To achieve that and play for my country was the highlight of my career.”

During his time on the ice, Kariya was also famed for returning to the ice during Game 6 of the 2003 Stanley Cup finals and firing a slap shot into the back of the net, after taking an elbow to the head and being carried off the ice.

He could also be famed for winning gold at the 2002 Winter Olympics, which he would say is the best team he’s ever played with.

Despite winning national titles, being an NHL All-Star, and winning gold internationally, Kariya credits his local winter clubs for getting his start in hockey and his minor league coaches for teaching him how to play.

And of course, he recognized his parents for all the sacrifices they made in their lives, “so I could succeed in mine,” he said.

Kariya’s hockey skills blossomed at a young age and he was a standout player for the Penticton Panthers in the BCJHL. He scored 244 points over two seasons earning Canadian Junior “A” MVP.

In 1991, he won silver with Team Canada at the inaugural Phoenix Cup, which would later become the Ivan Hlinka Memorial Tournament.

In 1993, he won the national title, and became the first freshman to win the Hobey Baker Award as the top NCAA player. Later that year the newly formed Mighty Ducks of Anaheim made Kariya their first pick ever. He also was the fourth pick overall in the NHL Entry Draft.

He has also been garnished with gold at all levels of international play.

With notes from Jonathan Eto. 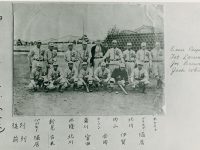 The ‘Mightiest Duck’ of them all, Paul Kariya ‹ Nikkei Voice | The Japanese Canadian National Newspaper


[…] team selected their first ever pick, a young talented Japanese Canadian from North Vancouver, B.C., Paul Kariya. He was fourth overall in the draft and playing for the University of Maine. This would queue the […]