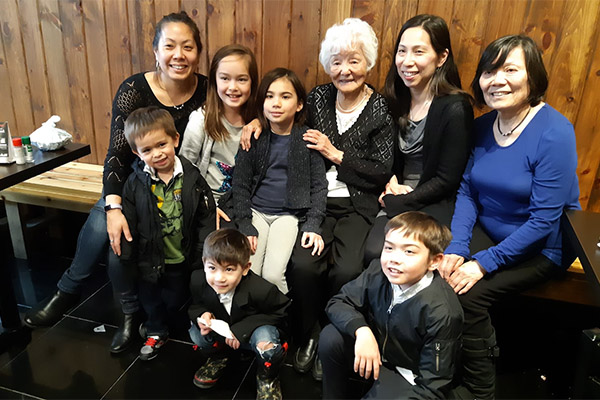 TORONTO — On Nisei Masako Okawara‘s birthday, she looked out the window to see her two granddaughters and their families in the parking lot of her North Scarborough condo next to a sign reading, “Happy 100th Birthday!”

The rest of the day was filled with phone calls, flower deliveries, and a zoom video conference call with friends and family singing Happy Birthday, while she blew out the candle on an ice cream treat. Her five grandchildren made virtual flowers, since Okawara loves flowers, as one of the original members of the Toronto Ikenobo Ikebana Society.

It was not the way Okawara imagined celebrating her 100th birthday, but she was not going to let the Coronavirus ruin her day. 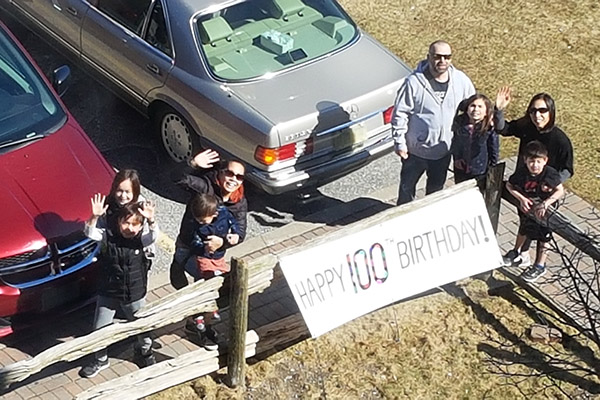 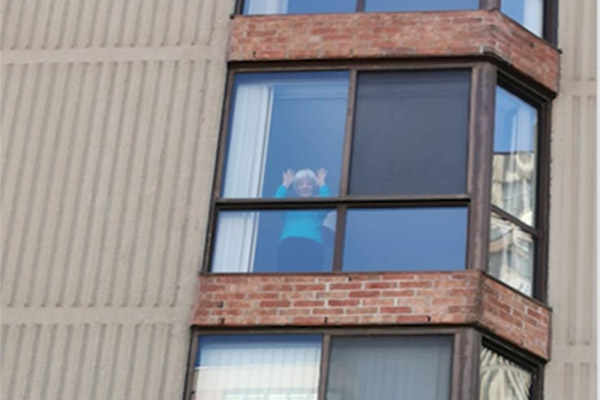 Above: Masako’s two granddaughters and their families, waving from the parking lot. Below: Masako waving back from the window of her condo. Photos courtesy: Grace Tanaka.

“She was just flabbergasted that you could do this on the computer,” Grace Tanaka, Okawara’s daughter, told Nikkei Voice in an interview. “We all sang happy birthday on zoom, out of tune, not in sync at all, but it was fun.”

Before the global pandemic, Okawara lived an extremely active life, explains Tanaka. If she wasn’t walking to the grocery store or Japanese market, she would be out at six in the morning with a pair of scissors to gather flowers. Not leaving her home since March 15, Okawara does 10 minutes of pilates everyday through video calls with her granddaughter, Allison, to stay active.

Last June Okawara fell and broke her hip. Tanaka rushed her mother to the hospital, where after discussion on quality of life, Okawara had surgery to replace the hip on the same day. Waking up after her surgery, the first thing she said was, ‘I’m fine,’ says Tanaka. After a week in the hospital, Okawara was transported in a bed to the rehabilitation centre, unable to walk.

“[The doctor] told me they doubt very much that she will ever get back to where she was, so I’m looking for a nursing home for her. She did her therapy twice a day, and by the time she left, she was in a walker,” Tanaka recalls. “And she came home and I insisted that she use her walker and a cane, but within a week it was gone and she was walking on her own and went to the casino.”

Tanaka started taking Okawara to Allison’s house to exercise in her home gym. Allison, who used to work for Gymnastics Ontario and has a degree in kinesiology, is a pilates instructor. Working up from five minutes, Okawara can now do up to 12-minute workouts and has stronger legs and shoulders, and she says she feels good. Okawara’s recovery is indicative of her resilient spirit, says Tanaka.

“She’s been saying this to me for 70 years, be good to others, it’ll come back, don’t worry about anything else, just give, give, give, that’s her motto. She never expects anything else from anyone,” says Tanaka.

Okawara is a two time survivor of colon cancer, first in her 50s, and again at 92. She immigrated to Canada from Okayama, Japan, as a teenager and was interned in New Denver during the Second World War. It was there that she met and married her husband of over 60 years, Shojiro. Shojiro died of pneumonia in the epicentre of Toronto’s SARS outbreak, Scarborough Grace Hospital, where the family could not visit him. 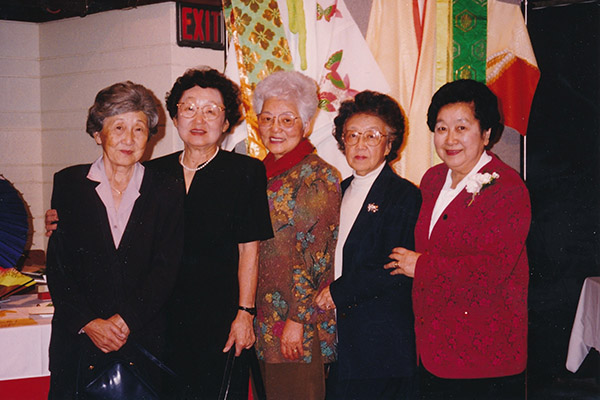 Okawara used to volunteer at the original Japanese Canadian Cultural Centre on Wynford Drive, cooking for weddings and other events, when the centre rented out its space to raise money, says Donna Yoshimatsu, a close family friend. Yoshimatsu remembers her mother and Okawara used to spend hours on the phone every night, discussing what needed to be done at the centre, or just laughing and giggling away. 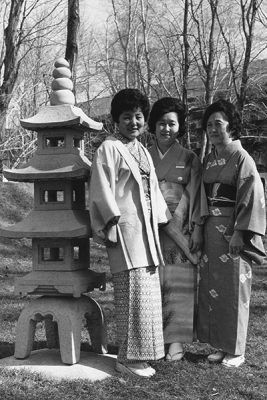 Friends for over 70 years, Yoshimatsu’s late mother, Shizuko Kadoguchi, had be a loyal friend of Okawara since their husbands met in Tashme. Kadoguchi went on to establish the Toronto chapter of the Ikenobo Ikebana Society. Okawara was an original member, taking ikebana lessons from Kadoguchi in her home before the centre opened. Kadoguchi and Okawara travelled around the world to promote Japanese culture through ikebana, from Jamaica to Southeast Asia and taking advanced lessons in Kyoto.

“They just donated all their time, and that’s why the centre is standing today,” says Yoshimatsu. “It gave them a place where they could congregate and create an establishment where they could have pride in their cultural heritage, and it is also really at the heart of multiculturalism in Canada.”

Now that she is 100, being locked inside during a pandemic doesn’t slow Okawara down. She still cooks, her specialties for her great grandchildren include tempura, chow mein, salmon and rice and cucumber salad, says Tanaka.

She has her own solarium of flowers arranged on the windowsills of the condo. Adept with technology she plays free casino games on her tablet and video chats with her family every day.

Still at 100 years old, Masako can juggle! Watch a video of Masako juggling below: