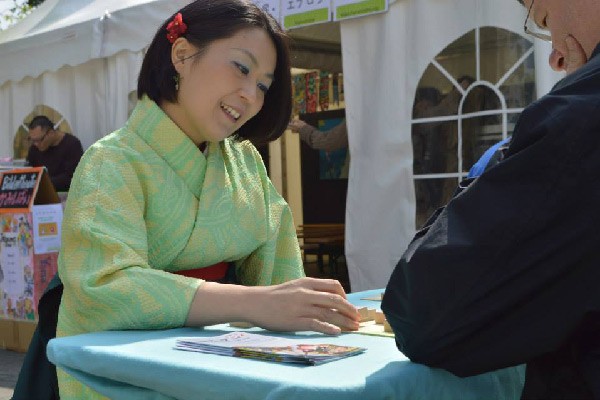 VANCOUVER – Professional shogi (Japanese chess) player Madoka Kitao will visit Vancouver on April 17 and 18, marking the first time that a shogi pro has come to Canada to promote the ancient board game. Her visit will involve several Japanese chess events including two visits to schools and a free public event for Vancouverites of all ages.

Shogi is Japan’s version of chess and was first played in its current form during the 16th century. The main difference between shogi and Western chess is shogi’s “drop rule,” in which captured pieces can be brought back into play under the captor’s control.

Additional differences between the games include several unique pieces used in shogi (such as gold and silver generals), and that most shogi pieces are able to promote into stronger pieces (such as a rook transforming into a dragon king).

Kitao, who became a professional shogi player in 2000 at the age of 20, travels the world regularly to promote Japanese chess. She has written several books about shogi, and is the creator of Let’s Catch the Lion! (or “animal shogi”), a smaller version of the game that uses animal images to make it easier for people to try Japanese chess for the first time. It has become particularly popular with children and women, as well as with people who cannot read Japanese characters.

Kitao has also appeared regularly on the NHK TV program “Shogi Koza,” and is a partner at 81Dojo.com, an online shogi website geared toward the international community.

If all of that didn’t keep her busy enough, she also runs a company called Nekomado that sells shogi equipment to players outside of Japan through an English-language website, and operates the Nekomado shogi school in Japan that caters to children and women.

Perhaps most impressive of all is that Kitao funds her international travel to promote shogi out of her own pocket – a fact that she modestly does not advertise.

Kitao will be hosted in Vancouver by the Vancouver Shogi Club, which was initially established in 1968 and re-launched in 2014. The club organized the 2014 Canadian Shogi Championship, the winner of which competed at the International Shogi Forum in Japan and progressed to the quarter-finals against the best players from around the world.

After a fruitful re-launch in 2014, the Vancouver Shogi Club has high aspirations for the future. In addition to Kitao’s visit, the club intends to make the Canadian Shogi Championship an annual event, play a leading role in re-establishing the dormant Canadian Shogi Federation, and eventually launch the Cascadian Open Shogi Championship – an in-person tournament for players from British Columbia, Washington, Oregon, and around the world.

Further details about the mid-April events featuring Kitao will be announced shortly on the Vancouver Shogi Club’s website (shogivancouver.wordpress.com/events).