Rent a Gaijin? An odd, but educational, Japanese service 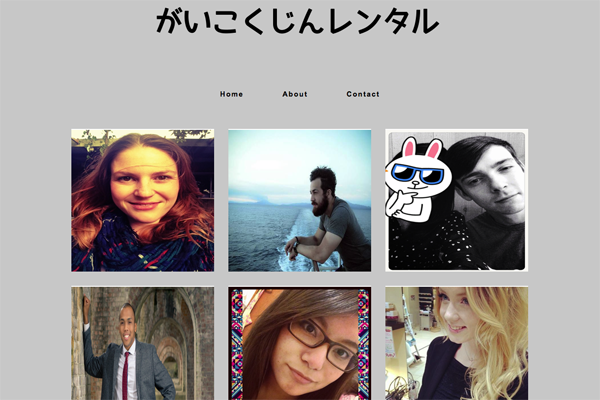 From 2000 to 4500 yen, Japanese can rent their very own Gaijin, but hold your horses it’s not as odd as it sounds.

Gaijin is a word used to describe foreigners in Japan and while there’s a bit of a derogatory slant behind the term it’s slowly beginning to soften. With an increasing number of workers coming from abroad, they’re more accepted in the country often working in contract positions or teaching English at schools.

Offering a range of services, Gaikokujin Rental offers a space for international workers to promote by hanging out with patrons. Some users also offer things like disc jockeying classes, home renovation, and building furniture as part of their services, though most offer help improving English conversation skills. The question is why no one had thought about this before?

“’Why has someone not?,’ is what we have been asking ourselves for years. Peer to peer business in Japan has always been big,” the founders of the service said in an interview with Tofugu.com. “Big for both client and contractor. Yet it seems every year the market is not adequately accessed, and unfortunately for many the public space for self-promotion is in, we feel, terminal decline.”

The website officially launched November of last year, and has since found a number of rentals to offer the Japanese public.

We realize our name is direct. “Foreigner” for rent, really? Yes, really — and it works. Gaikokujin Rental is a new social and economic frontier – abandoning the older closed systems (corporate to individual) for something more open-source and fun (peer to peer), allowing beneficial relationships to align between foreigners and Japanese.

We think this is important and remarkable.

Your talents are varied, and all worth something to someone. So in supplementation to your day job, the occasional one-off English conversation lesson or whatever you do that brings home the bacon, tout your stuff here and see what happens.

The website does not take a cut of the profits from the users. It’s mandate is to give the foreigners for rent a chance to show themselves off to interested Japanese patrons. It’s also a chance, as the website notes, for the rentals to network and expand through their clients. 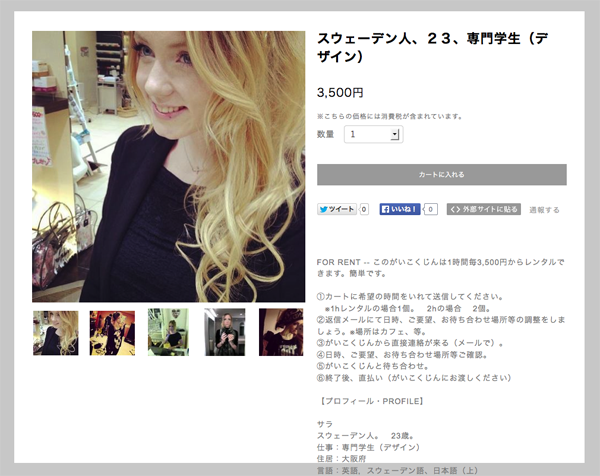 In January, the Japanese government announced that it would be taking steps to make open the door further to migrant workers to help spur economic growth. With an aging population, if Japan’s workforce is unable to keep up with the rest of the world it could drag down growth for the country.

According to the Health, Labour, and Welfare Ministry of Japan the number of foreign workers in the country exceeds 710,000, which is up 5.1 per cent from the previous year. In comparison, Britain has several million foreign workers.

Services like Gaikokujin Rental represent a growing trend in Japan to make the foreigner a little less foreign and to help promote cross-culture fertilization in the country. However, it is not a government-sponsored services and cannot be mistaken for sponsored initiatives like the Japan Canada Leadership Program or even Japan English Teachers.

We reached out to the team for a short interview and this is what they had to say.

Nikkei Voice: Why did you start this company?

Gaikokujin Rental: We wish to bring as many people together and build as many success stories as possible. To this end, we have invested energy and time into the idea, sustainability and scalability of Gaikokujin Rental. Like we say on our site and in interviews, we want to be online as a professional go-between for that all-important first direct connection between Japanese and foreigners. That is our service – a go-between, or a bridge. We genuinely want to help both Japanese and foreigners hook up directly, so as they can bypass the superfluous and expensive middle men (mostly big corporations).

NV: Is helping Japanese improve their English speaking skills a focus for most users of your service?

GR: We don’t think so, but maybe it is. Read their profiles. Some offer English lessons as their main thing, for others it’s secondary.

NV: How have people responded to the service? Do you have a lot of customers?

GR: Our customers (paying) are the foreigners. Japanese people become their customers. We have had an overwhelmingly positive response via social media, interviews conducted online and new people setting up their profile. A common misconception so far, however, has been that Gaikokujin Rental is “renting” people. In fact, we are not. As mentioned above, what we are doing is striving to turn the disconnected peer-to-peer business (foreign and Japanese) into uber-connectivity!

GR: To us growth means lots of little success stories the length of Japan, new networks forged, smiles, and satisfied customers. We plan to make this happen by staying online as a professional go-between for that all-important first connection between Japanese and foreigners. For Japanese, we hope to attract anyone and everyone, including businesses, who seek to employ foreigners in one way or another.

I’d rather be my own boss; make my own connections, as opposed to being at the helm of a recruiting office or shady dispatch company. I’ll be signing up today.


It’s certainly interesting seeing how the company has grown over the last year of business, and certainly a good thing that the space is meant for its users and not done through a shadowy agency.