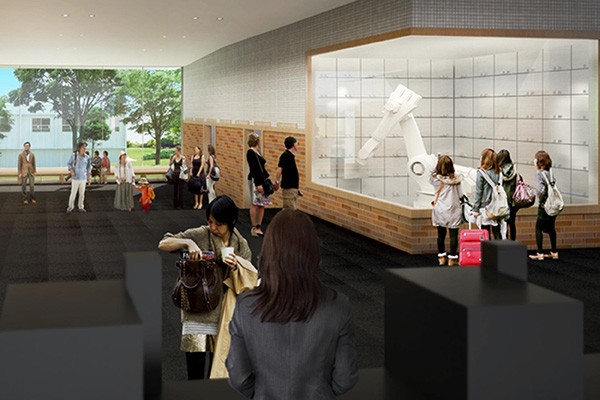 Concept art of the hotel with baggage being handled by a robotic arm in the background.

In Huis Ten Bosch theme park, Nagasaki prefecture, a new, weird kind of hotel is set to open. In this hotel, humanoid robots will serve as the main staff and no it’s not Blade Runner themed.

According to the Washington Post, this hotel will have 72 rooms and already set to open in July 2015. Ten robots will welcome customers, bring baggage to their rooms, and keep things clean inside rooms.

A new kind of robot called “Actroids” were recently exhibited by Kokoro Company and Osaka university, and will also work as frontline staff. They have been refined since they were initially released in 2003 and now resemble young Japanese women and men.

The “Actroid” is able to imitate human movements like breathing and blinking, plus they can understand Japanese, Mandarin, Korean, and English. More over, the “Actroid” can communication abilities allows it to reacts to eye-contact, body-language, and the tone of the speaker.

In other words, it’s as close to interacting with a human as you can get while traversing the uncanny valley.

According to hotel’s developer, for customers who feel uncomfortable, a few human staff will also be on hand to help. However, CEO Hideo Swada hopes that all of the services will be taken care of by the robots and says he hopes it will prove an efficient model.

Customers will also get to enjoy high-tech services during their stay. For example, when guests get into the room, face recognition software is used to download your person information and panels that can sense body temperature will keep things comfortable.

Compared to the price of a regular hotel stay ($200~$300), this hotel in Huis Ten Bosch will run a very reasonable $70 per night. The low cost, according to the company, is a reflection of the energy saving technology used and, quite obviously, low wages.

According to a JETRO report from 2007, the hotel industry is growing in Japan making hospitality a big employer of Japanese people. While the number of Western-style hotels is expanding, traditional Japanese hotels are diminishing in numbers. One can only hope that this new efficient style of hotel won’t become too popular and displace employees.

Let’s also hope that when the robot evolution comes, the staff will remember all the tips we gave to them.