Meet Setsuchan, a new contender for the title of the Internet’s most adorably ugly cat

Internet-famous Grumpy Cat is facing some stiff competition from equally as grumpy and perhaps just as adorably ugly rival, Setsuchan.

While he’s awake, Setsuchan is an adorable blue-eyed cat, but when he’s asleep that all seems to change. His tongue lolls out, his eyes roll back, and he takes on an expression similar to the walking dead.

We’ve heard of Sleeping Beauty, but we don’t often hear of Sleeping Ugly. However, the cat’s owners love the little guy’s sleeping mug and have just published a photo book showing off his hilarious sleeping face last Wednesday.

“The cat looks horrible when asleep. It looks dead. We were worried about whether those who have lost a pet cat before might be annoyed by the photographs. That’s how bad Setsuchan looks while asleep,” Shodensha employee Yoko Kaneda told Japan Real Time.

The 72-page book will feature all kinds of images of Setsuchan, but whether he’ll rival Grumpy Cat’s fame is up in the air.

In the interview, the publishers told Japan Real Time that Setsuchan’s success is due to his photos going viral over social media. Back in June when his face was first put online, the images were retweeted over 15,000 times. Of course, Setsuchan with his 58,000 Twitter followers hasn’t quite reached Grumpy Cat’s level of influence of over 258,000 followers on Twitter.

But we’ll let you decide who you think is the uglier cat with our slideshow below. 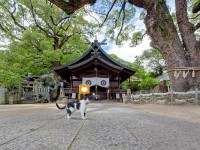 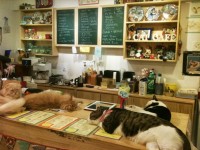 Cat Cafés are the latest trend that are the purrfect match for cat lovers
August 13, 2014