Shukatsu in Boston: Why thousands of Japanese students descent on Boston every year 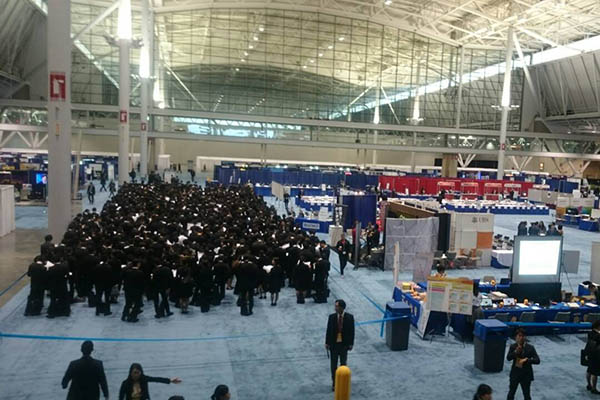 Students at the Boston Career Forum wait for the venue to opening on the first day. Photo by: Riku Kawahara

BOSTON – Every year, the Boston Career Forum attracts 200 Japanese and international companies, and approximately 10,000 young university-age students looking to get a head start on the job hunting season.

The only requirement in attending is that you are fluent enough in both Japanese and English to work, so there are always a few people there who are not Japanese but seeking employment in the country.

However, the majority of people who attend are Japanese students studying abroad at universities in the United States, Canada, and the United Kingdom.

And because new employees in Japan usually start working simultaneously from April, students who are abroad and graduate at different times often have difficulties finding work.

This inequality is the main reason Japanese students from far and wide descend on Boston at this time of the year, but the recruiting times have been changing along with Japan’s changing demographics and government policies.

A unique feature of job hunting in Japan is you have more opportunities if you have not graduated from university, but you are in your final year of study.

These students who get recruited at this time are called “shin-sotsu” in Japanese.

Japanese companies normally set two categories for the applicants, that is, for shin-sotsu students and for people who already graduated, which is what they call “ki-sotsu”.

Because most companies recruit much larger numbers of shin-sotsu than ki-sotsu, it would be extremely hard to get jobs once they graduate university.

Some students even repeat their senior year in fear of losing their titles of shin-sotsu.

For Japanese students who are studying abroad, this simultaneous recruiting system can be a big disadvantage because they may not be able to make it to the starting of the job hunting season.

In 2015, recruiting started in August, but according to the latest announcement by Keidanren, or the Japan Federation of Economic Organizations, job hunting season is most likely to start in June in 2016. This might have urged students to attend the job fair more than usual.

The Career Forum was first held in Boston in 1987, and it marked 29th this year.

It has also spread to other big cities such as Sydney, London, San Francisco, and Los Angeles, but Boston is by far the biggest.

These forums will keep on playing important roles as long as Japan doesn’t change its simultaneous shin-sotsu recruiting.