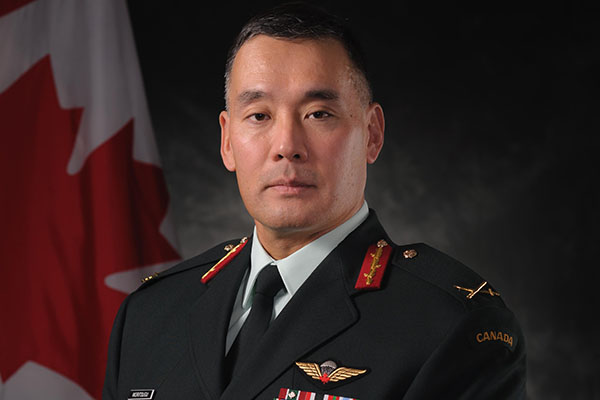 Brigadier-General Steven Moritsugu was promoted to his position on June 3. Before his promotion, Moritsugu has seen a number of highlights in his career like his role in the military pullout from Afghanistan. Photo courtesy: Canadian Forces

OTTAWA – On June 3, 2016, Steven Moritsugu was promoted to the rank of Brigadier-General with the Canadian Forces (CF) at a ceremony in Ottawa.

Over the course of his career, Brigadier-General Moritsugu has held 17 different positions with the CF, including staff officer at Canadian Joint Operations Command Headquarters and Commander of Canadian Forces Information Operations Group. In his new role, he will replace Brigadier-General J.J.M. Girard as Deputy Commander of Canadian Forces Intelligence Command and Director General Defence Signals Intelligence.

“At every one of the 17 different jobs I’ve had so far in the Forces, it’s not been about looking forward, it’s about doing the best you can with the job you have,” Moritsugu tells Nikkei Voice in an interview.

Moritsugu sees Sugimoto as a “pioneer” in the Forces and, although they have never met, says that he was an inspiration.

“Just the fact that he existed, for me at the time it was like, ‘oh, there’s proof.’ It doesn’t matter where your grandparents came from. If you do a good job, you work hard, you demonstrate you’re a leader and a doer, there is no limit,” Moritsugu says.

“So hopefully, if some young soldier or young officer out there who I might never meet is thinking the same things now, in 30 years might be in the same position as I am today,” he says.

Moritsugu had an early interest in the military, joining the cadets in high school. He was a member of 778 Squadron, Royal Canadian Air Cadets, in Richmond Hill, ON.

Since then, Moritsugu has been posted around the world from England to Washington, D.C., and has been deployed in Iran and Afghanistan. He was also the officer in charge of the withdrawal of Canadian troops from Afghanistan, which saw 2,800 troops being pulled out of the country between 2010 and 2014.

“There are so many different choices of things you could do in the Forces and it turned out that the ads were true: I got to see the world so far and do lots of interesting stuff,” he says.

He met success early on in his military career. As a 23 year-old Lieutenant, he was deployed in Iran, as part of the United Nations peacekeeping mission. With his commander a two-day travel away, he was left in charge of over 80 Canadian soldiers.

“At that age, it was an amazing learning and growth experience and that very much set the tone for the rest of my career,” Moritsugu says.

In addition to his role in the military, Moritsugu has also made significant achievements in academia. He received a Bachelor of Science degree in Physics and Computer Science from Royal Roads Military College, and three Masters degrees: Master of Science in Defence Technology, Master of International Service, and Master of Hemispheric Security and Defense.

Despite his success, he says that his story is actually quite average.

“Our family story is very much like every other Japanese-Canadian family’s story: first, the Isseis came and worked hard and built a life out of nothing, the second generation expanded and had even more success,” Moritsugu says. “Because of the launch pad, the foundation we had from our family, we’re not starting from home plate. We’re starting from second base.”

“A lot of leadership, in particular, is character based and I don’t claim to have the greatest character, but what I do have, I got from my parents and my grandparents,” Moritsugu says.

General Jonathan Vance, Chief of the Defence Staff, expressed his congratulations to those being promoted. “I have the utmost confidence that you will rise above expectations in your new roles,” he said in a press release.

Moritsugu says he is excited about his promotion and new responsibilities. “I am very much looking forward to the challenges of my new job because the higher you rise in rank, the more potential you have to influence how the whole organization goes,” he says.