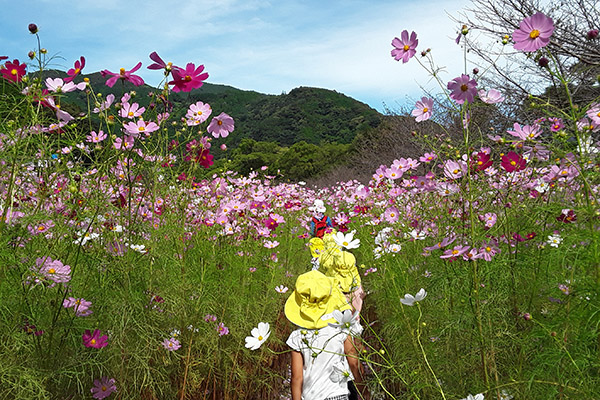 
Asking what it means to be Japanese Canadian while in Japan. Photos courtesy: Caroline Ishii.

OCHI, Japan — What is being Japanese? Where you are born or your citizenship? What part do skin colour and facial features play? This question has intrigued me for a while.

Growing up in Canada, I struggled with who I was because I didn’t look like the other kids in my class. In high school, I was one of a handful of Asian students. Even being Canadian, I feel by the way others talk to me, look at me and treat me, that I am different. I am proud of my Japanese ancestry, but sometimes, I wish my Japanese features weren’t one of the first things people see. I still get comments that make many Asians cringe. How long have I lived here? Or complimenting me on my English fluency. When I was opening my restaurant in Ottawa’s Chinatown, a media person commented on how nice it must be for me to be “with my people.” 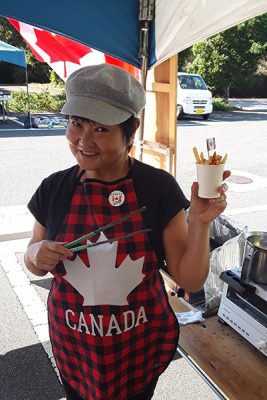 I thought it would be different in Japan. I would blend in because I look Japanese and thus, my features wouldn’t define whether I would fit in or not. But I realized it’s not that easy.

Since August, I have been working as an assistant English teacher with JET, the Japan Exchange and Teaching Program, in Ochi town, Kochi Prefecture on Shikoku Island. The more I try to fit in Japan, even dying my hair jet black and understanding more Japanese, the more I realize how Canadian I am. When I hear people speaking English—which is a rare thing in this rural town of 5,000—my ears perk up. When I see a group of gaikokujin (foreigners) speaking English, I want to rush over and say, “me too!” I know they will think I am not any different from the Japanese they see around them. But I know. I am Canadian.

When I was younger, I hated being Japanese. I wanted to be like the other girls with their blond hair, thin noses and wide eyes and dreamt about plastic surgery to change who I was. I followed the advice of magazine experts on how to use makeup to widen your eyes and make your nose look thinner. To be anything but be who I am. Skip forward a few decades, and I wondered how I got to a place where I don’t know who I really was.

I was worried people wouldn’t like me. I had worked hard to establish the titles, accomplishments and accumulate things to show my worthiness. But the more I had, the more empty I would feel inside. Why? I have found that these are the things that don’t matter to our spirits. What does is being authentic, honest and who we are. But what if we don’t know who we are? 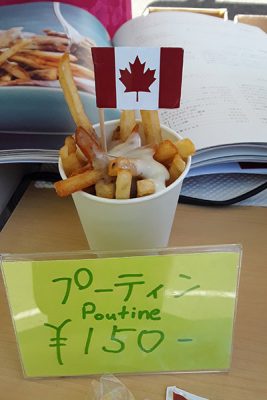 What is Canadian food? Caroline made poutine to let her students sample some Canadian cuisine.

We must find out. We start by removing the layers that we’ve put on year after year. It’s like wallpaper that we put up at the time because it was fashionable. But then another sheet goes up to please our partners, another layer to please our parents and so on. It’s complicated. I had been in this process of unravelling for years when I arrived on the doorsteps of Japan. I was passionate about digging into my Japanese roots, and I wanted to learn more about Japanese culture and language. It’s been a dream of mine for a long time to live and work in Japan. I love Japanese food and wanted to eat lots of it. Living in Japan, I don’t stand out and am part of the majority. Wherever I go, I am treated like any Japanese person.

However, as soon as I try to communicate in Japanese, people are surprised that I can’t speak like a native and realize I must be a foreigner. They are confused as I look like them, but I am not like them. This makes me equally confused, because I look like the people around me, but I know I am not like them too. Who am I then? I am the only person I can be, me. The person who has always been there through all the changes and layers I have put on. I am Japanese Canadian.

For me, this means that I am Canadian with Japanese roots. I was born and raised in Toronto with English as my first language, French as my second. I have Japanese ancestry as part of how I look but also in what I learned from my mother.

My parents are Nisei or second-generation, born in Canada to Japanese immigrants. When my mother was a young girl, her parents died, and she was sent to a rural town in Fukuoka, Japan, to live with her relatives. My mother was more like an Issei or first-generation because she did all her schooling in Japan and returned to Canada in her mid-twenties. She was sponsored by her older brother, who had remained in Canada after their parents died. This early uprooting from Canada and her siblings, and then returning decades later, made my mom conflicted about where she fit in and was home for her: Canada or Japan.

From my mother I learned about Japanese culture, traditions and cooking Japanese food. My mother used to make Japanese meals almost every night, from sukiyaki and teriyaki salmon to tempura and tonkatsu. She would buy the Japanese ingredients downtown at Sanko and Furuya Japanese food stores and would take the whole day to make things from scratch for dinner.

At our family get-togethers, there would be “Canadian food” such as fried chicken, cabbage rolls and lasagna. There also would be Japanese food such as futomaki and inarizushi, tempura, takuwan pickles and always hot Japanese rice and green tea. Food stirs up memories more quickly than most things. I called these memories “taste memories” in my first book, The Accidental Chef. In smelling, tasting or seeing food, there are often memories and emotions associated with it. 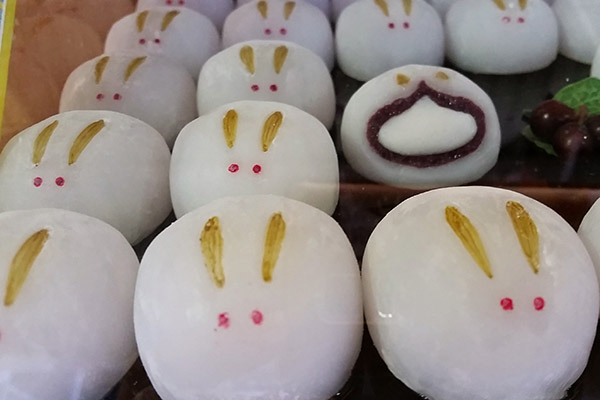 What I took away from those times of food shared with my mother, was the “taste” for good Japanese food, but more than this, my mother’s love of it. Even though she has been gone for almost thirty years, I feel she is close by in Japan as I taste so many foods that she loved.

I feel that my ancestors have pulled me to Japan. I have felt a deep longing to come to live and work here for a while, and I am not sure why. It is part of my ancestry, but I think it is more than this. It was tugging at me in Canada. I needed to find out more about my past and that part of me that makes me look Japanese, and I can’t get rid of with makeup remover or cosmetic surgery. 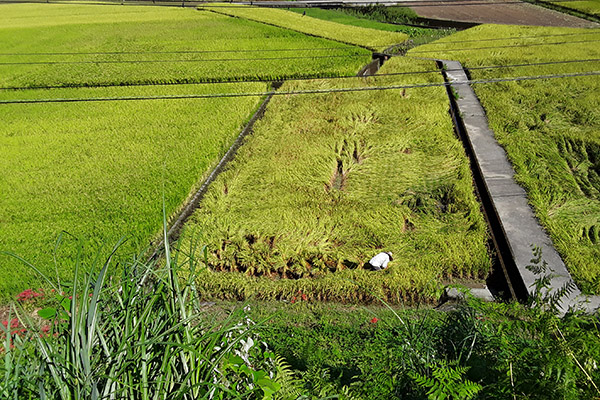 View of a rice field in Ochi, Japan.

I sense that by appreciating our pasts, whatever they may be, we can truly move forward into the future. There is part of being Japanese that is defined by the way I look. And, there is another part that is in my heart. I was born with this love of Japan. It is in my DNA and passed on from generation to generation.

My mother loved Canada, but I feel that her heart belonged to Japan. She was here during her formative years when she went through the school system, worked, made lasting friendships, and was immersed in the language, culture and the food. My mom transferred her love of Japanese food to me, through customs that she continued in Canada, such as the traditional New Year’s feast. She would spend weeks preparing for this. My mother’s making and sharing of Japanese cuisine with us was her way of expressing her love. It also consoled her when she would long to return to Japan and missed her life and friends.

Over time, I’ve come to appreciate that my identity is both Canadian and Japanese. What matters most, I feel, is what is in our hearts. 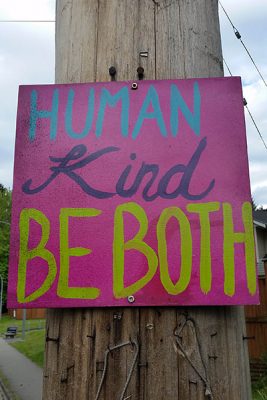 I have a deep love for Canada and Japan, and other countries that I have explored, and I have yet to explore. What I remember most—after the food that I have eaten along the way—is the people during my travels. The people I meet every day in my small mountain town inspire and touch me deeply, even though I can’t speak the language fluently. The more that I am here and talk in my broken Japanese with English, along with a great set of gestures, I realize that there is a language that is common to us all. This is being human. It’s the nod and smiles you exchange with another person when you meet them in the morning and say ohayou gozaimasu. It’s the cheering you give to a student before a race or test when you say gambatte, don’t give up. And it’s when I bring an elderly person some food and they reach out their hand to mine, and say arigato gozaimasu.

When I was living in Nanaimo, B.C. as I was out walking, and saw a sign that I had to stop and take a picture of. It was on a telephone post and in colourful letters. It said, “human and kind, be both.” It’s my motto now, and perhaps it has always been.

I am Japanese, Canadian, and humankind.