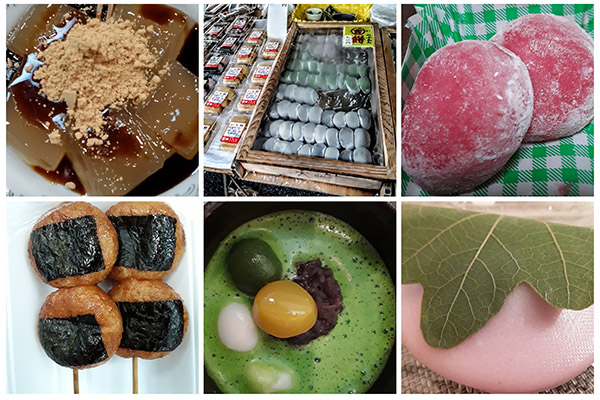 
What’s not to love about the soft, squishy pillow of deliciousness? Photos courtesy: Caroline Ishii.

OCHI, Japan — I love mochi. What’s not to love about this soft, squishy pillow of deliciousness? I know I am not alone. What is it about mochi that people love so much?

I’ve had a lifelong passion for food. I was born into it, with a mother and father who loved food. My mother was an excellent home cook, who made delicious Japanese food. My father’s experience as a short-order cook when he was young made him very quick at making breakfast. Sitting down at the kitchen table in the morning, out would come a complete breakfast with eggs, fried potatoes, bacon, toast, and porridge before I could say that I didn’t feel like breakfast.

Food made my parents happy. To cook it, eat it, and most of all, to share it with others. In a household that wasn’t open with feelings, food was the closest to saying, “I love you.” My mother and I disagreed on many things growing up, but we both shared a love of Japanese food. Often when I eat mochi and other Japanese food that my mother loved so dearly, I think of her. I imagine we are sharing the food I eat while I am here in Japan. 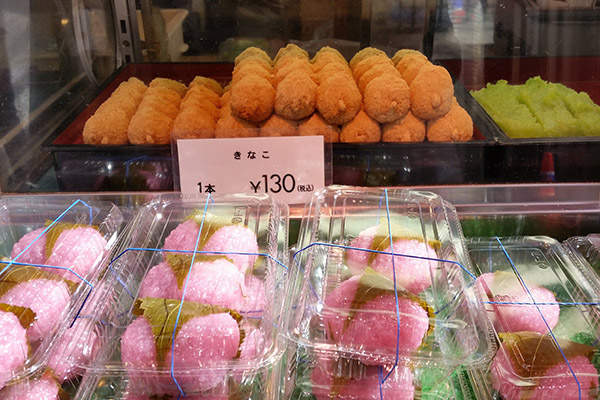 Mochi is made with short-grain glutinous rice. Traditionally mochi was made during Mochitsuki, the rice pounding festival. The hot steamed rice is placed in a stone or wooden mortar and pounded with a wooden hammer until it becomes a soft, sticky dough and made into round mochi cakes. Most mochi sold these days are made by machine.

Fresh mochi can be enjoyed immediately, dipped in soy sauce and sugar or eaten with kinako (toasted soybean powder) and anko (sweetened adzuki paste). Fresh genmai (brown rice) mochi is often eaten with steamed kabocha squash and finely grated daikon radish. It’s delicious! Often shaped into rectangles or circles, mochi hardens as it is cured and is typically used for cooking in a wide range of sweet and savoury dishes. 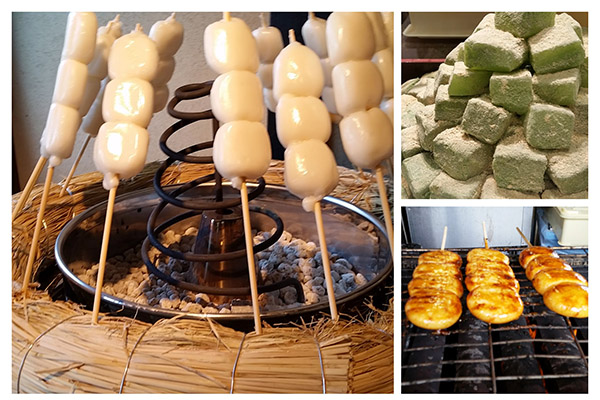 The history of mochi

The first Mochitsuki occurred after the birth of rice cultivation in Yamato, in the Nara Prefecture on Honshu Island, during the Yayoi period (300 BC – 300 AD). Red rice was the first variation used in the production of mochi and eaten exclusively by the emperor and nobles.

During the Heian period (794-1192), mochi was used as a ‘food for the gods’ and in religious offerings in Shinto and Buddhist rituals. Besides general good fortune, mochi was also known as an omen for happy marriages.

The tradition of eating mochi at New Year’s began during Japan’s Heian period (794-1185). The nobles of the imperial court believed that long strands of freshly made mochi symbolized long life and well-being. References to mochi can be found in the oldest Japanese novel, The Tale of Genji, written around 1,000 A.D. by Murasaki Shikibu, a novelist, poet, and lady-in-waiting in the Imperial court.

Mochi became popular among the Japanese and an easy-to-carry source of energy for farmers and samurai, especially during winter. The sound of samurai pounding mochi was a sign that they were about to go into battle.

The spirit of mochi

Mochi isn’t merely a food, it has inadama or spirit. The Japanese culture, through Shintoism, believes in yaoyorozu no kami, meaning there is a god or spirit in everything.

From a seedling to an ancient tree, from your sweater to your shoes, and from rice grain to mochi. Therefore, we need to respect and have gratitude for all that is around us. Since ancient times, Japanese society has depended on rice harvests for their survival and have a deep respect for rice and its spirit. Wasting rice is still considered a great sin in Japan today. 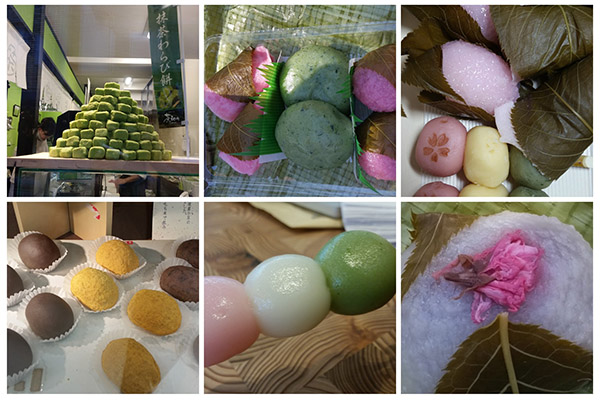 Growing up in Toronto, I was introduced to mochi by my mom as a traditional food for Japanese New Year’s Day. Kagami mochi (mirror mochi), a stacked pair of rounded rice cakes topped with an orange, was placed in our home to welcome the new year deities. In the morning, we would eat ozoni, a traditional hearty soup with mochi cakes. Later we would have osechi ryori, the traditional new year spread for good luck, which my mother prepared all week.

Living in Japan, I was surprised to see all the different kinds of mochi. There are special mochi following the seasons and accompanying special occasions. Here are just a few of the many: 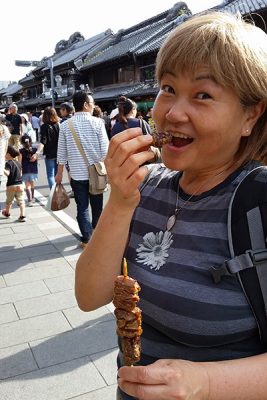 Sakura mochi starts appearing in stores with the arrival of spring. This is a pink-coloured mochi filled with anko and wrapped in a pickled cherry blossom leaf.

Ichigo daifuku is a strawberry covered in a thin layer of anko and enveloped in mochi. The two have now become some of my favourites in my mochi repertoire.

Hishimochi is eaten on Hinamatsuri, Girl’s Day or Doll’s Day, and celebrated on March 3. Hishimochi resembles a layer cake with its sections of red, white, and green mochi and is cut into diamond shapes.

Kashiwamochi is eaten on kodomo no hi or Children’s Day on May 5. A national holiday in Japan, families celebrate the happiness of their children by flying carp-shaped streamers and eating kashiwamochi, a mochi with anko or a white miso paste filling and wrapped in an oak-leaf.

Daifuku mochi: Translated as big belly rice cake, this mochi is regarded as a bringer of good luck. The soft round mochi cakes are often filled with anko or white bean paste. They come in white, light green and light pink colour and two sizes: mini and regular palm-size.

Botamochi: While daifuku fills mochi with other ingredients, botamochi is the other way around: mochi is the filling inside other elements. Classic botamochi uses a firm adzuki paste packed around the small ball of rice cake.

Oshiruko /Ozenzai: A soup of sweetened azuki beans with pieces of mochi. In winter, Japanese people often eat it to warm themselves and it is believed to drive away illness. 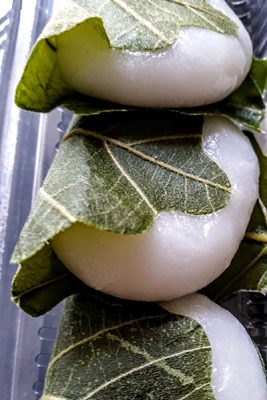 Yatsuhashi: One of the best-known local food products of Kyoto, these are fresh mochi triangles with a cinnamon flavour, wrapped around anko.

Mochigashi are traditional sweets that look like mochi but are made without rice, and instead use starch or wheat flour.

Dango is a dumpling that looks and tastes like mochi but is made from mochiko (rice flour), and not glutinous rice. Like mochi, dango is eaten all year round, and there are many varieties. One of my favourites is shiratama, a small mochi dumpling often used as a topping on desserts.

I love shiratama dumplings on top of matcha ice cream parfaits with anko and kakigori shaved ice with matcha syrup and anko. The pairing of mochi with matcha and adzuki is for me, a match made in matcha heaven!

Mochi is also used in a wide range of savoury dishes, from hot pot dishes like nabe and oden to chikara udon, where a toasted mochi is placed on top of the udon noodles and broth. It is also often toasted or grilled and eaten in a variety of ways, depending on the region and family preferences.

Modern mochi creations have become popular in North America, such as mochi ice cream, which are small balls of ice cream wrapped inside a mochi covering, in a variety of flavours such as coffee, chocolate and mango. Now I have a craving for mochi and will go out to buy some. Lucky for me, it is sold in almost every food store in Japan, even in my small town.

Mochi is a small gift of deliciousness from the gods. There is the spirit of rice in every mochi, bringing us energy, blessings and love. No wonder it continues to bring happiness to so many. Japanese soul food is great for these challenging times and for all seasons.