Students from Seiwa Gakuen in Sendai share culture and 3.11 experiences 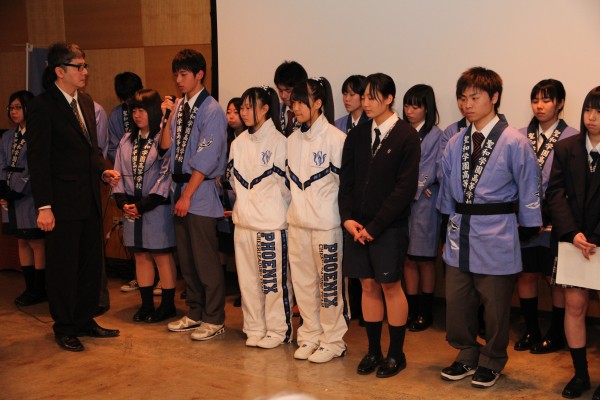 TORONTO – In only their second full day on Canadian soil, the 24 Grade 10 and 11 students from Seiwa Gakuen high school in Sendai, Japan showed no ill effects of their travels as they delivered an energetic presentation to the crowd gathered at Toronto’s Japan Foundation on March 18, 2013. The event, which was a part of their Kizuna Project itinerary, was an opportunity for the students to share first-hand experiences of the impact that the Great East Japan Earthquake of 2011 has had on their lives, and was one of several stops on a busy six-day Toronto tour.  Other destinations included the Japanese Canadian Cultural Centre to learn about Japanese Canadian history, the Kortright Centre to witness the production of maple syrup, and Malvern Collegiate to take part in school activities with fellow Kizuna Project participants.

On the same day of their Japan Foundation presentation, the students also visited Queen’s Park to meet with the Honourable David C. Onley, Lieutenant Governor of Ontario; and attended a reception in their honour at the official residence of the Consul-General of Japan, Mr. Eiji Yamamoto. They departed Toronto for Victoria and Vancouver on March 22, where they were to view the tsunami debris that has washed up on Canadian shores.

Just over two years removed from the disaster, the involvement of students, both Japanese and Canadian, through this initiative is critical. The Japanese Government’s Kizuna Project includes participants from Toronto, Montreal, Winnipeg and Vancouver, as well as from 40 other countries and regions. 100 Canadian students participated in the project, and 100 Japanese students from the affected areas visited the same Canadian cities. The over 10,000 youths worldwide who participated in the program stand to benefit from an opportunity to not only broaden their horizons, but also to be ambassadors for awareness and action; a point of great importance now that the once bright media spotlight has begun to dim.

Kizuna refers to the ties that bind human relations, and the Kizuna Project is an extension of this idea, enabling Japan to share its experiences in dealing with this devastating disaster, as well as to express its heartfelt appreciation to friends worldwide that extended their support. Each implementation of the project included a visit by the foreign students to disaster-affected areas, including visits to local schools, information sessions, and volunteer activities, all within safe areas. Japanese students then visited the foreign students at their respective schools. All of the exchanges were completed by the end of March 2013.

The Japanese people continue to recover from the disaster of March 11, 2011, which took a staggering total of approximately 16,000 lives, while destroying the infrastructure and economy of the Tohoku region. While an incredible amount of rebuilding has taken place, and with the resiliency of the local people helping to return stability to everyday life, a great number of challenges still remain.

While the students’ presentation might have initially given the impression that normalcy has been completely restored in Sendai, that would later prove not to be the case. One-by-one, the students began by introducing their country and culture. How to bow properly when meeting someone (complete with an illustration of the “most beautiful” 45 degree angle), the proper etiquette of worship at a temple, and later an interactive lesson in the local Sparrow Dance were just some of the items covered. As the students narrowed their focus and introduced the Tohoku region, Miyagi prefecture, and their Sendai school, the focus gradually shifted towards the earthquake, tsunami, and its effects. While the students are still able to enjoy many, if not all of the same activities as they were prior to the disaster, their lives and views of those around them have been deeply affected.

In addition to the severe effects of the earthquake and tsunami – Miyagi Prefecture has had over 9,500 deaths and just over 1,300 people still missing – one of the lasting impacts of the disaster in the area has been radiation. The school is about 100 km away from the Fukushima Nuclear Power Plant, and as a result, the way of living has been altered. Choosing food that has not been exposed to radiation remains one of the key concerns.

The students’ comprehensive presentation, which took three months to prepare, was followed by audience questions. One of them was: “What has changed in each of you before or after the earthquake?” To this, many replied that the experience has taught them not to take anything for granted, and to enjoy the simplest things in life.

Immediately following the disaster, access to food, water, electricity, and family and friends was no longer a given. At the same time, the students also observed the power of individuals working together, both within the affected areas, where strangers were offering to share their basic necessities with others, and abroad through international aid.

Said one student: “My house was washed away by the tsunami, and I did not have relatives nearby, but a friend of my mother’s took me in and we were able to live with her for a while. I also saw that we were receiving a lot of help from people from far away.”

Many of the students expressed a desire to return the giving spirit. One student, who used to exchange only basic greetings in passing with neighbours, has since made an effort to strike up a conversation on a regular basis.

Two years on, the students also reflected on the unexpected positives that have since surfaced. One student, who had to move in with his grandmother after the earthquake, found that his bond with her grew that much stronger as a result. Another said, “People [in Japan] used to blame the disaster, now we have gained things, we have certainly lost a lot, but we could have certainly lost a lot more.