Takashi Hilferink on fleeting mortality and the material world 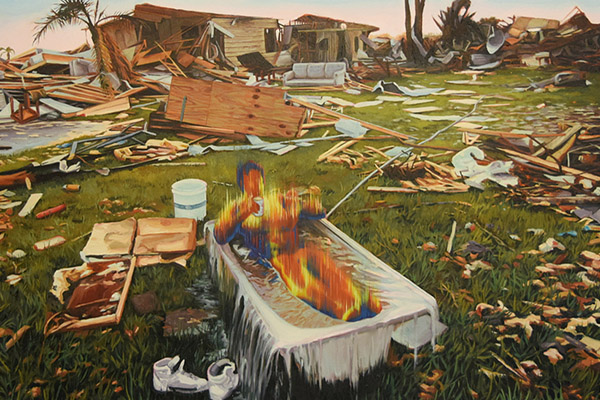 The work of Takashi Hilferink explores the impact of man on the environment with a focus on disaster imagery featuring thermographic images of humans performing daily rituals. Photo courtesy: Takashi Hilferink

Takashi Hilferink is the son of two professional ballet dancers Maki Kabayama Hilferink and Nicolaas Hilferink who are now teachers and organic farmers. Maki and Nicolaas met while dancing with the National Ballet Company of Canada.

As a child, Maki lived on a Mohawk reservation in Oka, Que. with her family for five years while her mother, Joan Kabayama, taught all grades at a local school. Her mother is well-known in the Japanese-Canadian and Japanese communities for her contributions including her masterfully succinct column called “Joan’s Window” published in The New Canadian and presently archived in the Fisher Library at the University of Toronto. Takashi’s step-Grandmother, Kathi Willing-Kabayama, was a computer specialist and a special education teacher at the Bishop Strachan Junior School in Toronto.

From his resumé we learn that Takashi’s father, Nico Hilferink, is a master carpenter trained in Amsterdam. Takashi had worked in construction and renovations since he was very young as his father’s apprentice, drywalling, framing, surfacing and painting. He’s hung doors and windows, installed baseboard and moulding, cast concrete and tiled bathrooms and kitchens, among other things. (A wise set of backup skills for any artist.)

While enjoying the annual Kabayama Sogatsu, I was informed of Takashi’s art by his brother, Michi, who spoke glowingly of his work. After visiting the Canadian Fine Arts Gallery, I contacted Takashi in Toronto where he lives and he supplied the following history. 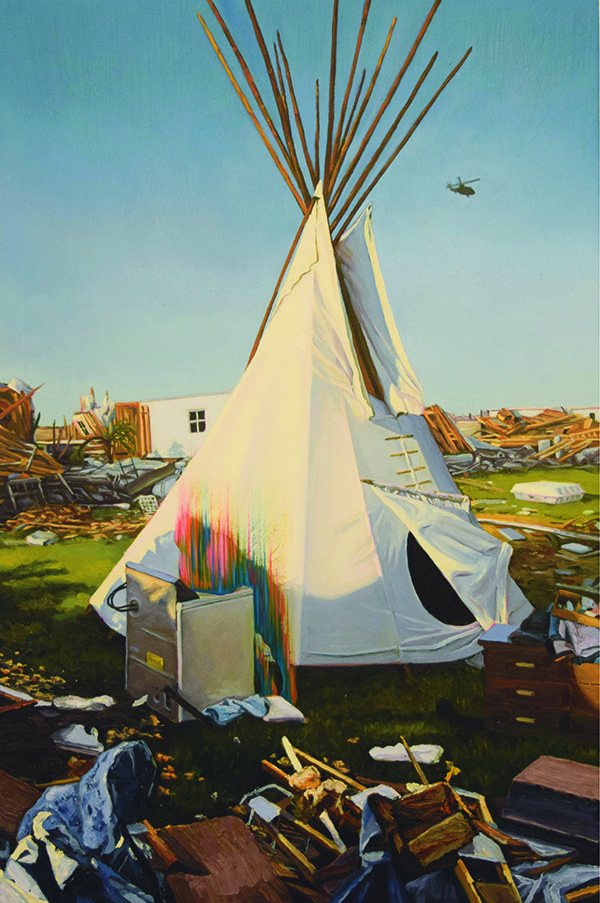 ‘Clear Skies’, seen above, explores the impact of man on the environment with a focus on disaster imagery and thermographic images. Image courtesy: Takashi Hilferink

Takashi Hilferink: I was born in 1985 in Ottawa. We moved to Cincinnati, Ohio in 1989 where my parents taught dance. We lived in a low-income neighbourhood in Cincinnati called Price Hill where I was the only Canadian on my street – the only “foreigner” – and the only person with any Japanese (or Dutch) heritage. As a mixed-race person who could pass as white, some people asked why I didn’t have a “normal” name, or felt they could confide opinions about Asians with me, as if I were some kind of double-agent. Moreover, I was the only kid I knew who drew a lot, played musical instruments, and whose parents were professional dancers – factors considered strange in a working class neighbourhood. I didn’t make close, abiding friends until I was 12, when I entered an outstanding high school called Walnut Hills. My art teacher – Mr. Wylie Ferguson – was a dapper, brilliant man who convinced me that I could actually make a life as an artist.

I graduated from York University in 2008 with a Bachelor of Fine Arts where I met an incredible artist, dancer, and student of life named Catherine Toth who became my life partner and collaborator for 5 years until she died on September 24, 2010. Catherine taught me so much about what it means to be an artist, a friend, a lover, and an activist. She continues to inspire my work. After her death, my struggles with addictions, particularly alcoholism, quickly worsened and my memories until the fall of 2012 became a blur. With the help of wonderful friends and my current patient and insightful partner, I overcame a lot of complicated grief and I continue to grow as a painter every day.

In my recent work, I juxtapose ethereal figures with radiant but ruined landscapes to address exceptionalism, loss, and the role of individuals within the world at large. The figures, painted as etheric emanations are colourful yet unearthly, seem present yet impermanent and create the possibility for the viewer to see oneself through connections to the narrative of one’s own life. Magical realism illustrates the mythological thinking I see underscoring contemporary reality. Economist Guy Standing refers to the current generation of young adults as “The Precariat”: our prospects for long-term employment, financial stability and homeownership are diminishing. This increasingly global reality of a precarious instability for our generation persists in stark contrast with the meritocratic underpinnings of the American Dream I grew up with. Many of my paintings evoke that perennially unsettled reality, combining elements of domestic space with disaster imagery. I paint in a deliberate and meticulous way to both draw the viewer into an illusory world and to reward the viewer’s attention and patience. Generally my pieces are small, referring to the clippings from newspapers, magazines and the Internet which inspire them, creating a sense of intimacy and privacy.

Takashi has completed public and private commissions in Toronto and Ottawa, Ontario and Cincinnati, Ohio. Several of his works can be viewed at the Canadian Fine Arts Gallery at 108 Yorkville Ave. in Toronto. You can visit his personal website here: www.takashi-hilferink.com