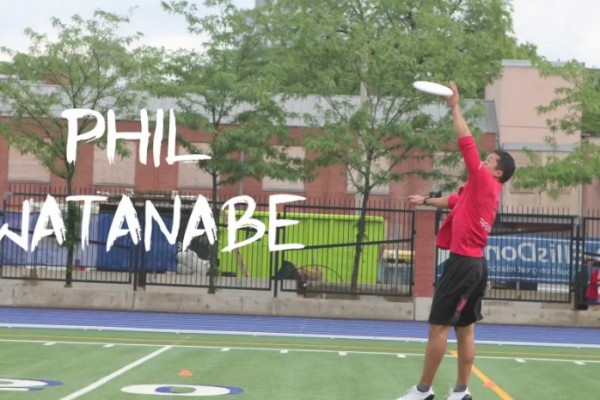 If you don’t know what Ultimate Frisbee is take a look at this!

Ultimate Frisbee is a high-intensity sport that combines the strategy of football, the physicality of basketball, and the speed of soccer and hockey. It’s an intense sport and Toronto Rush was just crowned champions of the American Ultimate Disc League. With a perfect record of

Phil Watanabe is a defensive handler on the team. As a stock trader he might spend his days throwing around numbers, but on the weekend he’s rushing the offensive lines of other teams playing on both the Toronto Rush and with GOAT, a team that is made up of Toronto and Ottawa players. We spoke with him about the sport, how it has changed his life, and his team’s recent win in Chicago.

Nikkei Voice: How did you get involved with Ultimate Frisbee?

Phil Watanabe: I started playing in 1996. A friend was going out to a recreational tournament and needed some extra players and asked if I wanted to play. I went with him and it was very casual and very recreational.

NV: How did things develop from there?

PW: I graduated from university in ’93, and ’96 to 2001 were pretty formative years in my career, so I didn’t have time to do it. Then I was in a horrible accident in 2000 while snowboarding. I was run over by a runaway skier, and I just started training to recover and I started to run and sprint quite a bit more in my workouts. Actually I just went out to try out for the men’s teams that travel around to various tournaments… I didn’t actually make that team, but that was a lot of fun and I tried to pursue it a bit.

NV: Your team, Toronto Rush, just had a perfect season and crowned the champions of the American Ultimate Disc League, how does that feel?

PW: Winning this league is a huge honor. It’s a huge accomplishment for my teammates and it was a blast and a lot of fun to do.

PW: It was completely different to play there. We played our divisional final against New York on Friday and our final on Sunday versus Wisconsin. Typically like the 11 years I’ve played before, we go to these tournaments where you are surrounded by Ultimate Frisbee players and teams, and you play three of four games on the Saturday. If you could imagine a park like Sunny Brooke Park with tonnes of fields side by side by side and all of these Ultimate Frisbee teams trying to play games and you could be tournament champions by Sunday. To have this isolated game on Saturday and this isolated game on Sunday the time to prepare for the game is quite different.

NV: Ultimate Frisbee is a pretty physically taxing sport, how do you find playing the games?

PW: It’s incredibly taxing at the highest level. In general, we are competing in the sport at the highest level against the best players in the world. As information on how to train for fitness, how to eat properly, and get into shape is more available on the Internet I found that the level of athleticism has improved top to bottom. It’s very physically taxing and it’s very physically competitive.

NV: What position do you play? What’s involved with your role?

PW: On the field there are seven players on each team. There is an offense and defense to start, but that’s quite fluid. My job is to cover the other team’s point guard or distributor. He’s generally a guy who is crafty with the disc and my job is to hound him as opposed to the other guys on the field who are more like wide receivers. We have guys who are really good at covering them who are generally taller and faster.

NV: What was the most exciting part of the tournament?

PW: The most exciting part was the win. The whole weekend was fantastic and significant, but just wining it all and see how happy it made my teammates and coaches and the fans who came from Toronto was very exciting.

NV: Ultimate Frisbee is a sport that can really get you active and physically fit, do you encourage younger players to take it up?

PW: Absolutely. One of the things our team – the Toronto Rush – is we hold clinics before our games that are held. We played our home games this year at Varsity Stadium and these games were generally Saturday or Sunday at 2 o’clock and before the game we would have high school teams come in and we would do clinics for them and team them how to play the game a little higher level. Many of my teammates are coaches who coach teams that was establishing themselves. It’s a fantastic way to get fit and to spend time outside.

NV: How does Ultimate Frisbee mesh with your everyday life?

PW: I’m a trader and that’s my 7 in the morning to 5 at night job, Monday to Friday. I’m also married with six-year-old twins and this level of Ultimate Frisbee requires quite a commitment. We have two practices a week and Toronto Rush plays one a week and sometimes two times a weekend for 16 weeks. On several of those weekends we are in Washington or New York, and I have to train and lift weights, run, sprint, separate workouts on top of that. It’s quite busy.

NV: How has Ultimate Frisbee changed your life?

PW: I went to business school and in school they teach teamwork. You really don’t quite understand the value of team work when you are younger. As you get older and you try to strive for greater and greater goals you do realize how important every member of the team is, how important dealing with the differences among your teammates is, and how to work with them in a harmonious and not antagonistic manner. I think these lessons have really helped me with worked and with friends and family.

The other team I play for is an amateur team try to reach the pinnacle of sport and Toronto Rush is a professional team trying to reach for the pinnacle of the sport. Both teams require a massive amount of teamwork, they have diverse members, and you really learn how to deal with leadership and teammates as both friends and players.

NV: What’s going to be happening with Toronto Rush and GOAT for the rest of the summer?

PW: Toronto Rush is over, so ended as 2013 Champions of the ADL, but GOAT we had a tournament in Atlanta a couple of weeks ago and our season is basically just starting now. Our team is pretty much formed, but we still have a few spots to fill. We also have a tournament in Washington D.C. in two weeks time and one in San Francisco on Labour Day weekend, and the championships near to the end of October.

NV: Are there any tournaments planned to be held here in Canada?

PW: It’s all in the United States, but that’s what is so great about the Toronto Rush. My friends and family have known I play this crazy sport for years and because the home games are at Varsity Stadium they finally got to see me play this year.


that is my dad