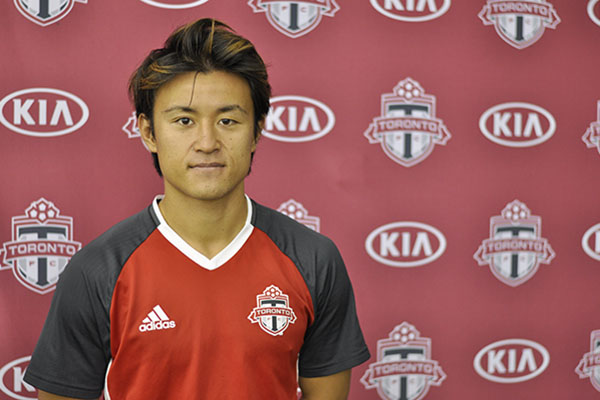 
Tsubasa Endoh, 22, was selected in the first round and 9th overall at the 2016 MLS SuperDraft and now plays with the Toronto FC. Photo by: Matthew O’Mara

Tsubasa Endoh, 22, was trembling when he was picked ninth overall at the Major League Soccer (MLS) SuperDraft in January this year and drafted by the Toronto Football Club (TFC).

“It’s just incredible, an incredible experience for me,” the midfielder, who played with the University of Maryland, told reporters following the decision.

Endoh admits he was worried that he wasn’t going to be picked at all, but joined by Hiromi, his mother, and a few teammates from Maryland, he had plenty of support reminding him of his incredible performance at the MLS Player Combine.

Now that Endoh has made his MLS debut, he seems to be settling in well with his new team.

During his debut game with the team on March 6, Endoh impressed veteran players like defender Drew Moor who said that his younger counterparts are really bringing their strengths to the squad.

“It’s been great,” Endoh told Nikkei Voice at the TFC training grounds at Downsview Park. “I came here to get a good understanding of what the coaches wanted from me, and it’s been an easy adjustment.”

And what the team wants out of him is a midfielder who can work closely with the team’s strikers and play well with Sebastian Giovinco, Jozy Altidore and Michael Bradley who make up the team’s midfield lineup.

“Throughout preseason Tsubasa has shown a high level of professionalism. He has done a great job of integrating into the group and has been a solid contributor thus far,” Toronto FC General Manager Tim Bezbatchenko said.

“He is a player that we have liked for some time and one with a great amount of upside.”

While Endoh is now in the swing of things with the sport, he hasn’t had a real chance to explore his new hometown of Toronto.

“I’ve been to the city a couple of times,” Endoh said. “It’s such a multicultural city.”

But the weather has been keeping him indoors to his dismay.

“It’s been kind of cold though,” he said with a laugh.

A large part of Endoh’s success has been attributed to the maturity the young player has shown in the major league.

What helped develop this mature personalty is  his willingness to work with other players and take on new roles in the field, but personal experience also plays a role.

Endoh lived through the Great East Japan Earthquake and tsunami in 2011. He remembers the incident and the fright it caused the area in Japan.

At the time, he was with the Japanese Football Association Academy, but he was forced to evacuate when the disaster struck affecting the nearby Fukushima Nuclear Power Plant that released deadly radiation.

He and the other players sat in the centre of one of the fields as the earthquake rattled the prefecture, but he managed to escape unharmed.

“It was pretty scary, but I still remember after it happened we left the field and we got in the bus, and I don’t know, we were kind of excited,” Endoh told Major League Soccer’s official website.

“We were going to be taking the physical test in a couple days, and we were talking about it like, ‘Are we going to do the physicals next week?’ And it turned out to be such a big, sad thing, but in the moment we didn’t know how serious it was. We thought it was funny, we thought we were getting out of our tests.”

Soon after, Endoh struck out abroad studying at the University of Maryland for sociology and will be receiving his degree this spring.

Living in a new place was tough for the player at the beginning with a language barrier to overcome, but he found himself in the company of his teammates who helped him.

“I had my teammates and a roommate who helped me out in terms of doing homework, communicating in English, and even learning slang,” Endoh said.

“Having teammates was definitely one of the best things that could have happened to me.” 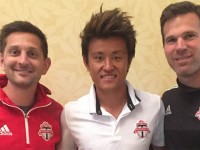 
[…] Night was held at BMO Field that night, to celebrate Japanese culture and Japanese soccer star, Tsubasa Endo, of the Toronto FC team. The event was organized by J Athletics Canada (JAC), a Japanese culture […]