Thanks Obama: U.S. President thanks Japan for contributing anime and manga to the world 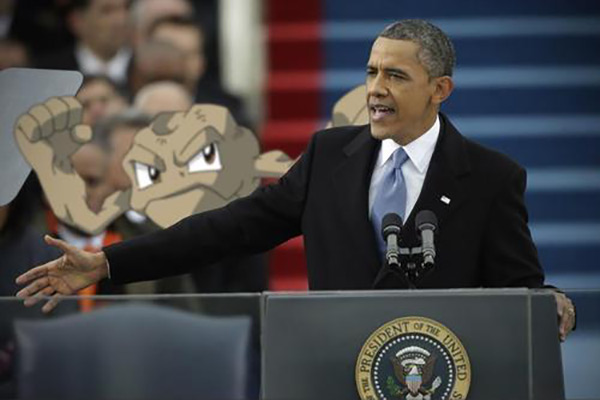 At a recent press conference, United States President Barack Obama met with Japanese Prime Minster Shinzo Abe. During the opening remarks to a press conference, he thanked the people of Japan for pop culture contributions.

“Today is a chance for Americans, especially our young people, to say thank you for all the things we love from Japan. Like karate and karaoke. Manga and anime. And, of course, emojis,” President Obama at the meeting, as the two addressed the press, said.

Emojis are symbols used online and in SMS messaging often taking the form of smiley faces or various emotions. The comment was made fairly tongue-in-cheek and Twitter users online are already superimposing him with various anime characters like JoJo and Luffy D. Monkey.

Some users online have already threatened that the President referencing anime, karaoke, and manga could result in his immediate memedom, in other words the Internet will probably soon be flooded with more images like the ones above.

Obama and Abe were together to conducts talks about the Pacific free trade agreement. Abe stressed the need to build a fair market in Asia and hopes Japan can lead the way in that effort.

He also argued that the proposed Trans-Pacific Partnership, a regulatory and investment treaty, is key to ensuring that the countries on both sides of the Pacific can continue to have prosperous relations.

Abe’s meeting at the White House was also an historic event as it was also part of the first State Dinner shared between the leaders of the two country during their terms in office. Part of the dinner included Obama reciting a haiku and Abe quoting lyrics from the song Ain’t No Mountain High Enough.