The art and athleticism of wearing a Kimono 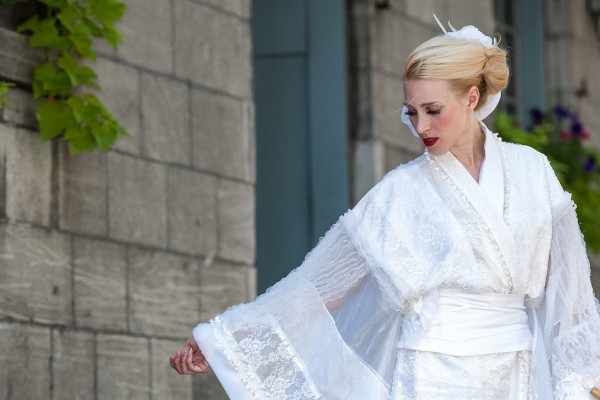 At Otakuthon in Montreal, amid the costumes and cosplay, a whole different kind of fashion was seen on stage.

Liisa Savinov-Mountain is the top model at The Kimono Show held at the anime convention, and we had a chance to speak with her about the challenges of modeling.

Originally a sports player, Liisa never imagined being a model professionally. After an accident, she remembered her few experiences modeling and with the encouragement of her friends she decided to try it again.

“The fact is that the work is very public and out in the open makes you get used to being judged by people, but you never take it personally,” Liisa said.

Like with any career it has its early challenges.

“You go to an audition and there are one hundred girls and you have ten seconds to show, ‘This is who I am.’ You have to be conscious as a person and what’s happening around you,” she told us.

Modeling is a challenging career, and Liisa has been serious about her work. Much of it is discipline, but also about having fun. At Otakuthon, she felt that even though she was wearing an exquisite piece of fashion she felt at home wearing it in front of the other costumed people there.

Otakuthon is like all of the fashion shows that she has done because you have the usual design runway and the ambience and photographers.

In many ways the anime convention it is unlike anything Liisa had experienced. She was very overwhelmed at first, but the she realized how amazing the convention was.

“To be able to go out and feel comfortable in a costume that is somebody you respect and love and you want to show who you care about and you are doing a tribute to them,” she said referring to the cosplayers who dress up like anime and video game characters

It was her first time wearing a Kimono at Otakuthon’s Kimono Show last year. She was a little nervous at first because she wasn’t sure how it would look having a group of North Americans wearing traditional kimonos.

But she realized how comfortable a yukata was to wear and it  how easy to walk in it.

While Liisa is well-known for her modeling, she is also an avid writer and standup comedian. She has written three books and she does standup comedy. Currently, she plan is to move to Toronto to work on her comedy and a cookbook for models, but she also does landscape architecture.

The Kimono Fashion Show is run by a group of Montreal-based fashion community members from Pointe à Callière Museum.

The Japanese Consulate in Montreal has provided official support to the show and Shokokai sponsored their activities.


Little Miss Springfield has nothing on the beautiful and most talented Liisa! All hail Queen Sivaine!


Hurrah! At last I got a website from where I be capable of
really get useful data concerning my study and knowledge.