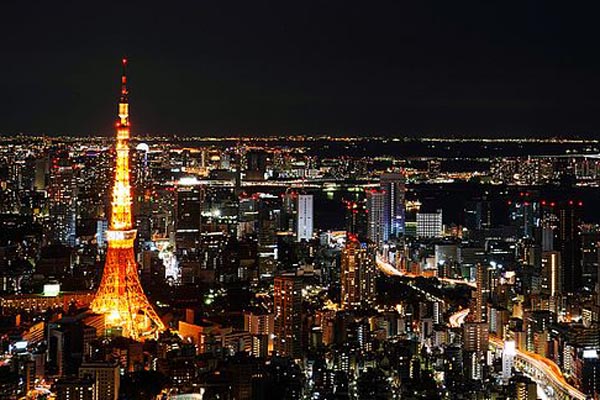 
A view of the financial centres of Tokyo, Japan.

TORONTO – From Abenomics to Naruto, this year’s International Symposium at York University’s Glendon Campus was on all things Japanese.

The ideas and knowledge shared were as diverse as the attendees ranging from economy to history to pop culture. The day started with a keynote speech from the Japanese Canadian Culture Centre’s Executive Director James Heron.

Contrasting between cultures of North American society to Japanese culture we all learned that slurping your noodles is completely acceptable in Japan, ambiguity in decision-making practices is to help prevent being a minority – no one wants to be the nail that sticks out, and perseverance throughout all situations is what made Japan the superpower that we all know today.

As attendees we were free to attend any topic that peaked our interest, for me that topic was Japan’s economy. Are you familiar with the term Abenomics? Japan was once the world’s 2nd largest economy, but in recent years China has been on the rise. According to CNN Money, in 2009 both China and Japan’s GDP were about equal. Then in 2010 Japan took its place as the 3rd largest economy. China’s GDP reached to $5.9 trillion, whereas Japan’s arrived at around $5.5 trillion. In 2014, Japan’s economy dropped to $4.8 trillion. Japan has been facing a lot of problems, particularly with a declining population, which even China will eventually have to face.

The general consensus of panelists at the symposium was: without people, the economy can’t grow. Japan is getting smaller both in population and GDP. While having more children is the answer to a declining population, finance is one of the underlying causes why this is not happening.  According to The Globe and Mail’s ‘Abenomics: Japan’s dramatic push to save its economy’, “Japan’s leaders desperately need people to feel financially secure enough to have children. That has not happened yet.”

The dilemma is quite paradoxical: to create wealth you need human capital to drive the economy today and into the future, but to get human capital you need wealth.

The current Prime Minister of Japan Shinzo Abe, has taken some unconventional steps to thwart the downward sloping trend of Japan’s economy. His methods are quite unique that the world has coined the plan as “Abenomics”.

Dr. Bernard Bernier from the University of Montreal explained that Prime Minister Abe wanted to create inflation by injecting more Japanese yen into the economy through the Bank of Japan buying company shares while using that inflation as an engine for growth. Did it work?

In 2014, the economy stopped shrinking and managed a humble growth of about 4 per cent. The value of the Japanese yen also went down, making products from Japan a bit cheaper than usual. However, outside factors caused hope for economic growth to be short lived. With the falling prices of oil, inflation was not sustained and the trend started losing steam.

The Globe and Mail explained arrow two as investing in more job creation on the city’s infrastructure with more “tunnels, bridges and earthquake resistant roads.” Bernier also added that more projects will begin to help rebuild Tohoku and prepare for the 2020 Olympic Games.

The final arrow was set to hit at the heart of Japan. The world is changing, and this third arrow is to move Japan in that same direction. Flexible work hours, the fall of seniority based promotions, more women in the work place, a lower income disparity, and reforming immigration laws to pacify Japan’s aging population.

This seems to be the arrow that will make the most impact at this point, but only time will tell on what the outcome will be.

For the Japan Symposium there was a clear divide on whether or not Japan will succeed with both arguments being very convincing. I ere on the side of optimism. Japan has been through economic struggles before, no doubt they have the potential to rise again.